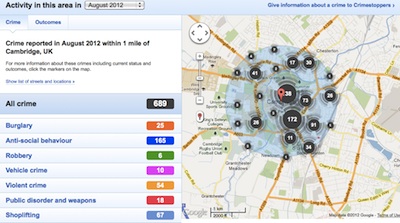 Crime Statistics for Cambridge on Police.UK (Link to map)

I would also like to see our police in Cambridgeshire recording the costs of crime, and reporting them to the courts, those setting local police priorities and the public.

All too often statistics produced by the police, are not useful for monitoring their performance or getting to grips with a problem. As an example local police priority setting meetings around the county are given statistics on violent crime which don’t distinguish between domestic violence and violence between strangers in public, despite the two requiring a different response from the police and wider public sector.

I think the level of reported crime is often a misleading statistic as if people don’t have confidence in the police, or even can’t easily get through to them to report a crime, that statistic can fall even if real crime levels are unchanged.

While the Police.UK website is popular, it doesn’t provide the information in enough detail or in a timely enough manner for people to really understand the nature of crimes they are interested in. I would like to see much greater openness and transparency from the police, including the publication of all incidents dealt with (minus personal information of course) so the public can see each morning what the police were doing the previous day. This would allow the public to make a more informed contribution to debates on policing and take action to prevent themselves becoming victims of crime.

I think the public ought be able to easily follow a case through from the report of an incident, to the courts or “disposal” by the police and through to sentencing.