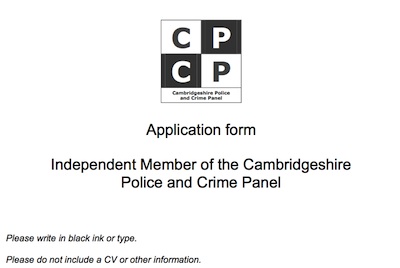 On the 26th of October 2012 I submitted an application to become one of the two independent, non councillor, members of Cambridgeshire’s Police and Crime Panel.

I am making the application, and covering email, which I submitted available publicly below.

I am writing to volunteer to serve as one of the non-councillor members of Cambridgeshire’s Police and Crime Panel.

I would like my application to be considered primarily on the basis of my performance, to-date, as a member of the public scrutinising and constructively lobbying local elected representatives and members of the Police Authority. All of my activities have been carried out publicly and have been reported on my website at rtaylor.co.uk and on my Twitter feed (@RTaylorUK).

I will be publishing this application openly on my website; you may wish to view it there where it benefits from additional formatting.

I obtained the application form from the appendix of the report to item 7 of the Shadow Police and Crime Panel meeting on the 18th of October 2012 (which I lobbied strongly to have made public). The copy of the form I have is an uneditable PDF so I have extracted the questions and addressed them below. I have on too many previous occasions when dealing with arms of state proven my ability to print responses on to paper or PDF forms; I hope it is acceptable that I have chosen not to go through that time-consuming and futile exercise on this occasion.

My request for the application pack, made in public, on the 14th of October has not at the time of writing resulted in my receiving a copy.

I would note that for a voluntary role a deadline of 5pm on a Friday is unhelpful; especially given the likelihood the public sector is not going to do anything with applications received until after the weekend. This is far from an isolated example, the public sector often uses such a deadline, especially in relation to consultations which are often completed by those working on a voluntary basis.

I have copied member of the panel Cllr Wilkins on this message so there can be independent confirmation it has been sent.