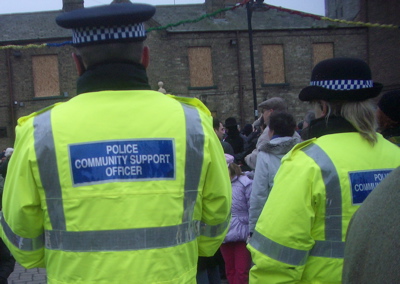 At the February 2014 Police and Crime Panel meeting Cambridgeshire’s Police and Crime Commissioner Graham Bright presented plans to continue reducing the number of Police Community Support Officers employed by Cambridgeshire Police. Commissioner Bright is planning to have 150 PCSOs in 2014/15 (see paragraph 6.3 of his budget report); that’s a reduction from 180 in 2013/14. In March 2010 the force employed 210 PCSOs.

I think Police and Crime Commissioner Graham Bright is doing the right thing by reducing the numbers of PCSOs while trying to maintain Police Constable numbers; I think he needs to do more to ensure the public understand why he is doing this, and ensure he explains why he considers PCs better value for money than PCSOs.

The Cambridge News article published an article the 5th of March 2014 headlined: Branded ‘plastic police’, Cambridgeshire PCSOs here to stay after groundbreaking review – but are they worth it?. I have looked for the report on the review which prompted the article on both the police website and the Police and Crime Commissioner’s website but it does not appear to have been made publicly available.

I have made a Freedom of Information request for the final report of the recently concluded review into the role of PCSOs led by Chief Inspector James Sutherland.

I am quoted in the Cambridge News article. My full comments from which the quote was taken were:

I would much rather see police resources spent employing officers with the full powers of a Police Constable rather than Police Community Support Officers who don’t have the powers to, for example, arrest people or deal with motoring offences. A PCSO can be paid about the same as a PC and we get more for our money with a PC.

I don’t think we ought give our PCSOs more powers, but instead we should make a shift towards employing more constables. Those PCSOs who are capable of exercising the powers of a constable should become constables.

PCSOs are popular with some people because they are the only sign of any policing they see on a regular basis. Having people walking around in florescent jackets is a very expensive and inefficient way of providing reassurance that an area is being policed. I’d much rather see the police providing that reassurance by improving their call answering performance and ensuring they are in a position to rapidly respond in a proportionate manner when they are called upon.

Many people have seen, and in some cases, met their local PCSOs, so they can get the feeling they are going to lose something if we make a shift back to PCs, this isn’t necessarily the case if those PCSOs who are able and willing become constables and if we see changes to the way policing is managed.

Technology improvements allowing PCs to spend more time outside of police stations, as well as restructuring so we have more PCs, fewer higher ranking officers, and support for those who want to remain PCs and not seek promotion will I hope address the problem of PCs not being seen on the streets which PCSOs were brought in to try and solve.

Employing people as PCSOs can be a way of bringing specialist skills, such as languages, into the police. I think that is a valuable and justifiable use of the PCSO position, where those being recruited as constables lack those skills.

Becoming a PCSO has recently become a major route in to becoming a police constable. I would rather see PCs given the full powers of a constable following their training. While a probationary period, and intense supervision is required in the early years I don’t think prospective constables ought be required to serve time as a PCSO.

A PCSO in Cambridgeshire is paid up to £20,734, and the starting salary for a PC is about to become £19,000 (This is of course a complex matter when you take into account overtime, and the way many PCs get promoted and obtain higher salaries over time, but the key point is a PC need not cost more than a PCSO; and PCSOs are not policing on the cheap).

I have written previously about the role of PCSOs: