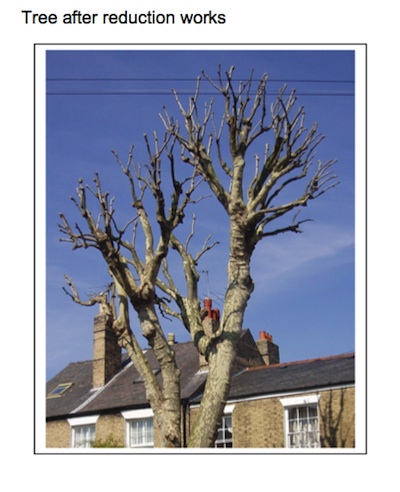 How Alexandra Gardens Trees May Look After Proposed Works

The trees in Alexandra Gardens in Arbury, Cambridge are yet again under threat from Cambridge City Council chainsaws.

The council has published two documents as part of a consultation:

The tree works order proposes a reduction of 70% by volume of five substantial London plane trees on the boundary with properties on Alpha Road.

The work on the five trees may not be all that’s considered though; as the report states that the impressive London Plane trees along Carlyle Road are also “implicated” in tree root damage claims.

Pressure to take action against the trees is coming from the owners of near-by properties; three of whom are demanding the council fell a number of trees and another merely says they’d prefer removal. There are also calls for trees to be better maintained or reduced in size.

The key problem here appears to me to be that the council and its insurers have been paying out money to home owners who have claimed their properties are being damaged by the trees; and this has prompted others to come forward seeking cash. The money isn’t going into residents pockets directly; its being used to improve properties, and residents are doing quite disruptive works, underpinning can involve people moving out of their homes for months.

I suggested back in 2011 that the council should robustly defend what was then the first claim to prevent it becoming the first of many. Instead of doing this though, as noted in the linked, current, report, councillors set a budget of £570,000 for payouts.

My view is that we, the residents of Cambridge, through the city council, do have a duty to manage the trees responsibly – that’s simply being good neighbours to those who own properties in the vicinity. I think we generally do look after the trees responsibly – there are safety and aesthetic considerations as well as structural though we need to elect good councillors who take an interest and ensure officers are doing what they should.

If people’s properties in the area have poor foundations though there is a limit to what the public ought be liable for. We shouldn’t be paying for strengthening people’s homes if they’re not built well enough to survive their environment. The trees are part of the local environment and they have been there, in their current mature form, for many decades.

Little evidence is being provided publicly that current state of the trees is causing any damage and that any problems are not just due to insufficient foundations for the type of ground (as I understand it clay which changes seasonally as it goes from being wet to dry). The ground gets wet, and dries out, seasonally with or without trees, though I expect trees have an impact. There are properties of a similar age and structure well away from trees in the area which have required work to strengthen them. There are no details of the cases people are making to the council; but there’s no mention of any direct mechanical impact of tree roots on properties (of the sort you see when tree roots disrupt the city’s footpaths).

I think we have too great a compensation culture. I this is an example of where we’ve gone too far. I think people need to take personal responsibility. For example I oppose the pay-outs to people whose cars get damaged when they drive them on the roads. If my car gets damage from potholes and road humps (as it has) I take the view my car isn’t suited to the environment or I should have driven it more slowly and carefully. I wouldn’t seek compensation from the public via the councils. As another example many houses including my own suffer from vibration from traffic on a nearby road I’m not going to sue anyone over that – it’s part of living where I do.

I am surprised that the council are again apparently engaging a “P Biddle” of Wantage, Oxfordshire, to advise them when his previous report for the council was based on outdated Google maps street view images.

The council state that property owners are unlikely to co-operate to enable the installation of a root barrier; suggesting they really want their properties strengthened irrespective of the impact of the trees. If these cases ever reached court I can’t imagine that stance would put them in a strong position. The council report also makes reference to home owners refusing to share evidence of the extent of problems with the council.

The council’s report references “Third party expert opinion” which it describes as “Dr Giles Biddle advice note on Alpha Road boundary” but this document has not been published. This doesn’t appear to reference the advice given by Biddle in 2011 as that related to the Carlyle Road area.

Another report from November 2014 by Julian Forbes Laird is referred to, this is discussed in detail, but isn’t released in full either.

I think we need research to be carried out on the impact of nearby trees on foundations in clay soils; and on the impact of various degrees of pollarding / pruning so decisions like those which need to be taken in cases like this can be made from an informed position. I would like to see more data openly published by the council when it obtains it to aid those doing such research.

The council could also let universities and research councils know what research it would like to see done and perhaps even sponsor an element of the work; maybe in-kind by allowing someone to work with the council’s extensive legion of tree administration officers.

As it is, as is often the case, our councillors will have to take a judgement in the absence of the information they would ideally have before them.

I would like to live in a country where the courts system was accessible, affordable, and speedy. If there is a residual dispute here once councillors have taken a judgement on how it is reasonable to manage the trees we should be able to put the city’s and the home owners’ cases to the courts without fear of that being an unduly expensive, risky and time consuming process.

I have submitted a consultation response which covers the points made here. It also stresses representations should not have to be made multiple times and suggests all representations the council has received on this subject over recent years are put to councillors taking decisions in relation to the current proposals. I have noted that as the planning committee is to consider something which is not a planning application its public speaking rules ought be relaxed accordingly – there is no need to restrict input to those who have made formal representations.

I have also suggested the council’s tree database ought be placed online and kept up to date with planned maintenance and what has actually taken place. I think this would reassure those with properties in the vicinity of public trees and empower them to chase up programmed work which has not taken place with elected representatives.

As someone who has commented previously on similar proposals I said I am disappointed the council didn’t pro-actively contact me to let me know about the latest proposals and consultation.

I also noted there are also routine planned tree works in the currently published schedule of routine tree works which wrongly state Alexandra Gardens is in West Chesterton. This kind of error in the past has led to the wrong councillors being alerted to proposals for tree works, which in turn can mean the public don’t find out about proposals as quickly as they otherwise should.

I’ve made a City Council ward map available on my website which the council might find helpful.

If I was a councillor at this time I’d be calling for more information with a view to being in a better position to take a decision. I can’t envisage ever supporting felling, or 70% reductions, of the substantial London plane trees. I think we need a regular, public, regime of responsibly maintaining the trees.

I have written a number of previous articles on this subject:

A number of those articles are followed by extensive comments and updates.