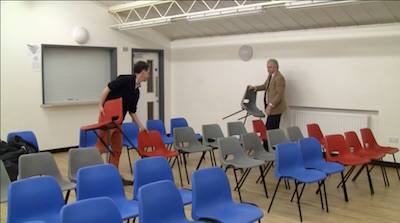 Richard Taylor and Patrick O’Flynn Putting Out Chairs for a UKIP Branch Meeting in Cambridge.

Meetings Open to All

As I understand it local meetings of the Liberal Democrats, Conservatives, Labour and Green parties are all private affairs. There have been two slight exceptions – the Liberal Democrats invited selected media to their 2010 general election candidate selection meeting (I saw the footage on the news!) and in 2010 the Conservatives in Cambridge held an open caucus event as part of their candidate selection process.

When it was first advertised on the branch website the UKIP meeting was described as “open to all” however this was later restricted to members and their guests with others wanting to attend were invited to contact the organiser. I did contact the organiser, and if any other local political parties made a similar offer I would do the same. UKIP explained the change was due to the small capacity of the room they had booked and noted their meetings held in larger venues really are open to all.

Groups of people are obviously free to decide to meet in private if they like. Particularly given the generally falling numbers of members of political parties (despite increases in UKIP and Green membership) I would like to see them operate more openly. I think they way political parties take decisions behind closed doors rather than following open public debate in the House of Commons or in council chambers is regrettable. I would like to see representatives who would operate more openly and transparently elected.

When UKIP’s leader Nigel Farage visited Cambridgeshire I, and anyone else who wanted, could go along and listen to him speak and talk to him afterwards. When leaders of other parties visit the area their visits are never publicised and their events never open to the public. An occasional staged walkabout where the leaders are ringed by party activists is about as close to the public as they get.

I hope that UKIP’s open ways of operating will either encourage other parties to open up; or encourage people not to vote for parties who operate in an unnecessarily private and secretive manner.

I was surprised to hear UKIP admit some of their candidates don’t really try to get elected and that their main reason for being on the ballot paper is not to try and get elected but to increase the party’s credibility in the eyes of voters who’ll see the party name on more ballot papers.

I’ve previously though met one of my Liberal Democrat candidates who said he wasn’t campaigning as he quite liked the Labour candidate.

The branch chairman admitted three paper candidates got elected as Cambridgeshire County Councillors and warned those signing up to be UKIP candidates in the local elections they might end up as councillors.

Prospective candidates at the meeting were told something would have to be fairly drastically wrong for them to fail the party’s central vetting process.

The meeting heard that having ever been a member of the BNP or a list of other parties including the “Russell Brand Elocution Party” barred people from standing for UKIP. [Does the Russell Brand party exist?]

One UKIP member, obviously a relatively senior one as he was, along with his wife, in charge of the tea and coffee, asked about ID card policy.

Cambridge Candidate Patrick O’Flynn strongly opposed the idea of ID cards on the grounds they were not part of our tradition and that UKIP didn’t trust the government to run such a system.

The questioner said the lack of ID cards was “why we’ve got so many asylum seekers on the loose”.

O’Flynn said that controlling access to public services could involve a card, but it would be “voluntary and not compulsory to have and carry about”.

One of UKIP’s local government candidates said: “I was furious when I watched that programme the other night. … If they had a number you could phone where you could say yes I loved the programme I was in favour of it or no I didn’t like the programme you could get people ringing up. Over 2,000 people complained. I didn’t have the faintest idea how to complain and I’m not on emails or computers or anything else so there’s no way I could have done. There should have been a number to register a complaint.”

Patrick O’Flynn said: “They say don’t get angry get even”.

Another attendee suggested calling advertisers who had bought ads shown during the problem and telling them their products would be boycotted if they bought such adverts again.

I asked Patrick O’Flynn why he’d not attended the hustings held to-date in Cambridge and what he would have said if he had attended them. I’ve added his comments to my articles on the events:

Why Are UKIP Bothering With a Manifesto?

I asked Patrick O’Flynn why, as essentially a single issue party only interested in immigration and leaving the European Union why they were bothering to write a full manifesto. I also asked if UKIP’s MPs would stand down and prompt a by-election if the UK did leave the EU.

O’Flynn said UKIP are a mature political party and UKIP MPs would stay in Parliament shaping the political agenda even if the UK left the EU.

I was asked on Twitter to ask Patrick O’Flynn about UKIP’s views on Same Sex Marriage:

@RTaylorUK UKIP opposed gay marriage before it became law. Is UKIP policy now to repeal it, or has the party decided it was wrong before?

I put the question to Patrick O’Flynn. I didn’t get a quick and clear answer. Eventually I think he said he was relaxed about same sex marriage but I’m not sure. I’ve published the video so you can see for yourself.

He did note the idea was not in any manifesto and so said introducing it was undemocratic. He suggested the law was introduced as an attempt to “detoxify” the Conservative party.

On UKIP Holding the Balance of Power

Patrick O’Flynn told me that UKIP have a policy of not joining any coalition Government and it would be up to the party’s elected MPs who to put into Government (MPs can via a “supply and confidence” agreement support a Government without joining it).

At first O’Flynn suggested economic stability would be UKIP MP’s primary consideration but he then said it would be getting a referendum on the UK’s exit from the European Union.

View the exchange (poor sound quality as people were coming in).
I also discussed the state of defamation law with Patrick O’Flynn as it is something I care about and I feel impacts my ability to campaign for a better society and to raise awareness of misconduct, corruption and injustices I’m aware of.
I specifically mentioned the recent change enabling universities to sue for libel and the lack of protection for student, and graduate researcher, whistle-blowers in universities.
The state of libel law makes campaigning drier, less personal, and less effective than it might otherwise be.
I felt Patrick O’Flynn gave an encouraging response and I told him I’d like to see it as a subject discussed during the campaign.

Now they are talking about buying signs for the election. UKIP in Kings Hedges, Cambridge. Someone has donated metal stakes.

This UKIP branch has about £800. UKIP in Kings Hedges, Cambridge. #live

UKIP say they have candidates for 50% of Cambridge City wards. pic.twitter.com/7xkoRVmB93