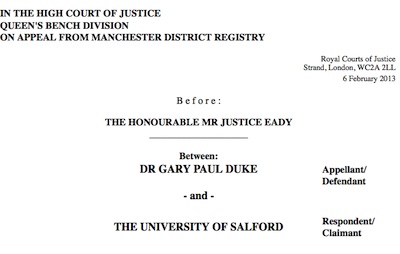 Recently, in relation to my volunteering to help administer mySociety’s freedom of information website WhatDoTheyKnow.com, I came across the February 2013 High Court judgement in which Judge David Eady ruled universities could sue for libel. In my view Mr Eady took it upon himself to substantially change the law via that judgement as previously the 1993 decision by the House of Lords in a case involving Derbyshire County Council vs Times Newspapers Limited and others established the principle that public bodies could not sue for libel.

I think Mr Eady made a mistake when he judged universities not to be public or governmental bodies. I think a strong argument that they are, which Mr Eady did not explicitly consider, is that they control access to professions.

I think that when judges find themselves making substantive decisions like these, of the kind which MPs should be making, there should be clear routes for them to suggest to parliament that it clarifies its intent, or decides what the law ought be. MPs do from time to time respond to judgements but they do so in a haphazard way, I would like to see a formal and transparent process.

As it is MPs decided not to place the principle arising from the Derbyshire case into law when writing the Defamation Act 2013 which will come into force later in 2013, they’ve left it up to judges to decide which public bodies ought not be able to take libel action.

My view is public bodies should not be able to sue for libel. People should be free to say what they like about councils, hospitals, universities, police forces etc. without the risk of having the costs in time and money of having to defend themselves as well as the prospect of potentially ruinous damages to pay if they are judged by a court to have libelled a public body.

I would like to see students, and others, feeling free to comment on, influence the policies of, and seek to improve universities. I think Mr Eady’s new law will deter people from such activities. I would like to see other protections too such as enforcement of the Education Act provisions requiring democratic students’ unions and for protection for student whistleblowers.

Personally I’ve always been careful when raising concerns and making suggestions in relation to universities to focus on the institutional problems and not on individuals. Consideration of libel risk based on the law as I understood it before Mr Eady in my view unilaterally changed it was just one reason for that, another is that major problems come not with individuals but the institutions and their governance arrangements within which individuals operate.

I wrote to my MP before parliament considered the new libel law saying:

My view is the principle that any governmental body should be open to uninhibited public criticism, and therefore should not be able to use or threaten use defamation law to quash its critics ought be extended to apply to all public bodies, again this could use the definition of public bodies as applies with FOI/EIR legislation. Such a provision could be seen as a mere clarification of the current position; my view it would be desirable to see the current uncertainty over how widely the “Derbyshire Principle” applies clarified by Parliament and not left to a court. Where senior officers in an organisation are to all intents and purposes acting on behalf of (and perhaps even funded by) the public body they too ought in my view be covered.

I would hope that the defences in the Defamation Act 2013 of truth, honest opinion and publication on matter of public interest would all cover anything I would want to write about universities; but I’d rather universities weren’t able to sue me in the first place.

This article is written in an entirely personal capacity, and not as a WhatDoTheyKnow volunteer

6 comments/updates on “Universities Can Sue for Libel”