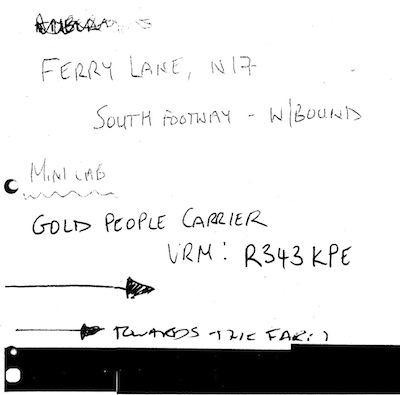 An inquest is currently underway in relation to the death of Mark Duggan who was shot and killed by police in London on the 4th of August 2011.

The police evidence raises questions about how officers prepare statements for inquests, court appearances, and investigations by others such as the Independent Police Complaints Commission.

The inquest has heard how the police officers involved in the stop and shooting got together to work out and agree certain facts before writing their substantive statements. This in itself isn’t necessarily a problem (it is well established practice, and could be beneficial); however the nature of the statements produced, if they are collaborative, or individual, needs to be made clear.

One problem I think is police officers have been unwilling to make statements based solely on their own experiences, what they did, and what they knew. Officers have taken it upon themselves to investigate and research matters so that they can add detail to their statements. I can see a parallel myself to the institutional of attitude of Cambridgeshire Police officers who couldn’t manage to fill in only the information they were aware of on a form for sharing information on children, but instead took it upon themselves to try carry out research an investigations to find out information from other bodies to “complete” the form.

In some cases having access to additional factual information to assist in providing a statement might be perfectly reasonable. For example having access to a map while writing a statement means an officer can describe where he was with reference to road names, the alternative, a description solely based on memory might be very hard to interpret and could well be less accurate.

It appears officers are keen, for example, to refer to vehicles precisely using their registration numbers, even if they only became aware of those after the event, while writing their statements. Obtaining a registration number could be seen in a similar vein as obtaining a road name, it’s just a fact which assists with following and interpreting the substantive content of the statement, but the inquest also heard officers were collaborating on establishing the timeline of events.

One problem is that something not quite right could be recalled by just one officer; however investigators, coroners, courts and jurors end up hearing it repeatedly from multiple officers and might give it undue weight.

Redacted copies of flip chart pages the firearms offices used when collaborating on their statements have been provided to the inquest and published.

The following exchanges are from the transcript of the inquest hearing on the 8th of October 2013:

Q. Are these your flip charts?

A. They were flip charts I asked one of my officers to create whilst we wrote our detailed account.

Q. Was the purpose of this flip chart to set out the basics for everybody’s accounts, such as which car they were in what times things happened, and so on?

A. Yes, exactly. It was to confirm times, places, locations, postings, sequence of events.

An officer giving evidence on the 9th of October explained:

you concentrate so hard on getting to somewhere that you aren’t actually aware of the roads/junctions that you pass through. So for me to make a detailed account, it certainly benefited me that I could have the road names, et cetera, that we went down

Even the identity of the person who had been shot dead was revealed on the 10th of October 2013 to be something individual officers had not initially known but found out so they could put it in their statements:

A. It had not been confirmed, no, to me. I believed it was from the information we had. But I couldn’t — I had seen a photo of him, I couldn’t recognise Mr Duggan necessarily from the photo that I’d seen. So therefore I didn’t know 100 per cent. I suspected the likelihood was that it was.

Q. How did you know it was Mr Duggan by 7 August?

A. I don’t know to be honest. It was confirmed by one of the investigation team or someone had confirmed to me it was Mr Duggan, I cannot remember exactly how that came about.

Q. What I’m interested in here is helping the jury about what degree of discussion there was between the events of the 4th and the recounting of it in statements on the 7 August. So one of the things that had been discussed somehow was that the person who got shot was Mark Duggan, yes?

It is important when a matter is being heard in court, or being investigated, to know what the source of the information being provided is. In this case I can make these comments because the way the statements were made, and the problems that creates, has been teased out during the inquest.

One good example of the problem arising from the process the police used when writing their statements is that the police officers agreed the car they stopped was coloured gold, whereas photos of the scene, and the driver, demonstrate it was silver. Perhaps there was a culture of not challenging the recollections of other officers during the meeting at which the police created their substantive statements?

Officers Unwilling to Give Evidence About Other Officers

Police officers giving evidence to the Duggan inquest appear to me to be taking great care not to say anything which might put other officers in a difficult position.

They are acting more as you might expect a gang of criminals not wishing to be seen to be informing on their criminal colleagues to rather than a professional, open and transparent police force seeking to act in the public interest to do all they can to prevent a recurrence of similar tragic circumstances.

on page five of the 10th of October 2013 transcript there is a typical answer from a police officer asked about other officers:

A. I cannot account for what they did, sir, I cannot remember.

On the 8th of October there was the following exchange:

What did you see that justified the use of force that was absolutely necessary?

A. Sir, I saw nothing. However, they obviously did.

Of course if someone really didn’t see something; that’s absolutely fine, and the cases above might well be examples where the officers are being open and honest.

There’s also the question of omissions; what’s not been noted down. One of the key areas omitted from police statements made available to the investigation team and inquest has been any mention of the gun (or mention of discussion of the fact a gun had not been found) after the shooting but before the gun on the grass was located. The officer who says he found the gun didn’t mention that key fact, that he had found the gun, in his notes or initial statement:

Just to remind you, the day book you kept has no reference to finding a gun. The day book that was kept — or note — by ZZ50 has no record, and finally this: as far as your very first statement on the 4 August — you can see it if you wish — but that does not have any reference to the gun either, does it?

Another problem with police statements appears to be the use of template language. On the 10th of October one of the police firearms officers appeared at the inquest and appeared to be tripped up by such a careless statement:

A. I was actually — it sounds like a contradiction in terms but it’s a police issue plain clothes jacket.

THE ASSISTANT CORONER: It’s certainly not what we see you wearing. It’s not a uniform there, is it?

A. It’s a uniform — it’s a police issue civilian-look jacket.

THE ASSISTANT CORONER: It means you don’t have to pay for it yourself?

A. We don’t have to pay for it ourselves.

THE ASSISTANT CORONER: But you don’t want to look like a police officer, if you’re doing covert operations.

A. The idea behind them, if you suddenly have to deploy in an overt uniform role, they’ve got patches in them that they can pull out that says “Police” on them, and the same at the back.

THE ASSISTANT CORONER: You say it again in the next statement. Next sentence: “I was armed with a Glock 17 self-loading pistol (338), Heckler & Koch MP5 and a Taser.” Is that correct?

THE ASSISTANT CORONER: But is that correct?

Did the Police Identify Themselves Clearly as Police?

Q. Did they have sirens?

A. No sirens, no. There was no indicators or sirens or anything.

Q. Did you realise they were police cars?

…
Q. Did you know they were policemen?

A. No, at first I didn’t know who they were.

Q. Were they shouting at all?

A. No, I don’t know. I didn’t hear anything at the time, if they did shout anything towards me at the time.

Q. Were they wearing caps with police chequered bands on?

Q. Before Mr Duggan was shot, did you hear the men around there shout, “Armed police!”?

I think we ask the specialist firearms teams to do a very difficult job. Personally I don’t have sufficient faith in our courts and justice system to be prepared to put myself in such a position.

The attitude of the police appears to me to suggest they don’t have complete faith in the justice and oversight systems either and so are not as open and forthcoming in their engagement with them as they could be.

Perhaps police officers even think they need to present a particular version of events to investigators, the courts, and inquests. Maybe omitting some of the complexities of reality.

After a traumatic incident I think it is right that the firearms team are allowed to stay together to support each other. It’s a question of balancing what’s best for the individual officers, for their wellbeing, verses the public interest in getting an accurate and reliable account of what happened.

I think it would make more sense to have an agreed collaborative statement from the whole firearms team; with individuals then writing their own additional statements which would exclusively cover information that they, and only they knew, for example their own perspective, and reasons for their own personal decisions when it came to the stop and shooting itself.

Every individual officer has to be personally accountable for their actions; and ought to be available to answer questions from investigators, the inquest and the courts, I wouldn’t want to detract from that.