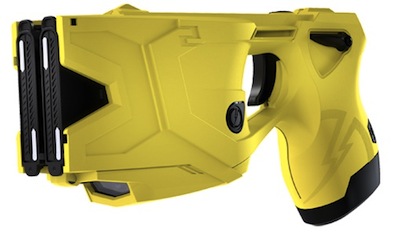 On Wednesday the 24th of October 2012, Richard M Jones, the sales manager for Tactical Safety Responses Limited, the sole UK distributor for TASER weapons, visited me at my home in Cambridge.

Richard Jones had told me that as someone who regularly comments on UK Police TASER use he and his company wanted to help make sure my comments are well informed. I was prepared to listen and was interested in learning more about TASERs.

Another aspect, and perhaps motive, of making contact with me appeared to be making clear that Tactical Safety Responses Limited monitors what people say and write about TASER and that they are keen to take action against those who put a foot wrong. Examples of pitfalls commentators might stumble into include giving an impression deaths and injuries are directly related to TASER use when there is an alternative explanation. The company may also seek to act against those calling non TASER branded electric shock devices “TASERs”. My view, which I expressed, is that the the company risks damaging its reputation if it is seen to be trying to restrict public debate on TASERs. Richard Jones was already aware of the infamous antics of Portakabin™ Limited. Mr Jones, who previously ran a media monitoring business, told me he regularly got in touch with newspapers in relation to their published stories on TASER. One of those I was given the impression Mr Jones and his company are watching closely is campaigner Sophie Khan.

One of the new TASER products Tactical Safety Responses Limited are currently trying to sell to the UK police is the TASER X2.

Mr Jones brought a TASER X2 for me to see. What he brought was labelled “Laser pointer only”, he told me it was not a live device and contained dummy cartridges. He told me his company were only able to import them for supply to the Home Office and not, as yet, anyone else.

The LASER pointer element was demonstrated on my living room wall; this new TASER has two red-dots, rather than the single red-dot of the TASER in use by the UK police. It was explained to me that this is designed to help users of the weapon determine where each of the barbs is going to end up; eliminating one of the more challenging elements of TASER training as officers currently have to estimate where the second barb will end up.

There are a number improvements in the X2 over the X26; the cartridges containing the barbs are more enclosed and less at risk of being damaged or knocked off. The device can also be “arced” as a show of force with the cartridges in place whereas currently I was told the cartridge has to be removed from the TASER to enable it to be arced or used in direct contact with an individual in so-called “drive-stun” mode.

The X2 is contains two cartridges; with two barbs each.

Mr Jones told me there were various ways to programme the weapon, including a “semi-automatic” mode and a mode where the second barbs are fired automatically if the first ones don’t make a connection. He said they were a development of a TASER product designed for use on fast moving animals. The auto-firing function worries me.

This led to me asking about how TASER weapons used by the UK Police are programmed; I asked if they were restricted to give only five seconds of shock. I was surprised to be told no, while the devices time how long a shock has lasted, an officer can keep shocking someone for as long as they like (as long as the battery lasts, which is many many times in excess of 5 seconds). Mr Jones explained this was an officer safety protection, and argued it would be dangerous for a police officer to take away the option of re-shocking or continuing to shock an individual who got up again after being TASERed.

One other feature of the TASER X2 is that if any two of the four barbs make a good connection with the body of the target individual the current can be routed between them.

I was shown the timer which counts up to show the user of the TASER how long they have shocked someone for. I asked about what information was recorded by the TASER and if it was just the fact it had been used, in what form (ie with barbs or without), and for how long.

Mr Jones told me the device recorded a lot more than that; but he wasn’t allowed to tell me exactly what. Following my asking he said there was no removable memory card or similar and weapons involved in controversial cases were recovered to one of two TASER owned computers, one of which is in the Home Office, where special software is used to extract data.

I was given the impression, that something along the lines of a voltage / resistance trace over time is downloadable from the X26 which can then be analysed to see if the barbs made good contact, and to an extent what effect they had on the individual and for how long. Mr Jones did say the data allows investigators to determine if neuromuscular incapacitation took place or not.

This raises two thoughts for me:

Mr Jones brought along the TASER CAM – which can fit in a new battery back of existing TASERs. (TASER also make a head mounted camera, and one of those was demonstrated to me too).

TASER Cam footage had just the day before been released by the Australian Ombudsman:

Mr Jones wants to sell these cameras to police forces; and would like me and other commentators to be calling for their use – to improve oversight of police use of the weapons.

I heard from Mr Jones something I’d heard before – that Firearms officers are generally cautious, and oppose, the use of cameras on the grounds they only show part of the story and can amount to incriminating evidence in cases where an appropriate judgement has been made; however other police officers are generally more open to the use of cameras thinking they can protect them against unfounded complaints or even criminal charges.

I am aware, and concerned, that cameras rarely tell the full story, and if we are to have TASER cams; or police cameras more generally, in wider use then courts and jurors need to be well versed in the potentially unreliability of this source of evidence. There are also privacy issues; if the police TASER me is it really fair if the video becomes available publicly on YouTube or is used as television entertainment, I’d say not.

Mr Jones was reluctant to talk about the past and what he (technically accurately) called “the previous company”, Pro-Tect Systems Limited. He did however claim that the failure in the Raoul Moat case was merely a technicality. He said that the problem was not the carriage of the TASER X-REP (Shotgun TASER cartridges) by one individual alone (as appears to have been generally assumed and reported) but that terms of Pro-Tect’s authorisation under Section 5 of the Firearms Act 1968 specified the maximum number of weapons which could be carried by one individual (5) and that limit was what had been exceeded.

Authorisations under the Firearms Act are not pro-actively published, and my request for the current authorisation was refused so it is impossible to know what requirements were actually placed on the company.

Mr Jones also complained a bit about the restrictions imposed by the authorisation; he said he’d on occasion had to sit in a van to accompany a delivery. He noted that the restrictions did not apply to the police; so a police officer can, and officers routinely he said do, put a large number of weapons in a car and travel with them, on their own, across the country to deliver them to TSR Limited for servicing. What do they do if they need to stop to use the toilet on the motorway? Mr Jones noted that it wasn’t just TASER the police had lax rules and practices on driving around the country with, but other weapons too, he mentioned “rocket launchers” but I suspect he may have been exaggerating.

While nothing specific was mentioned; Jones did say that some airlines now routinely carried TASER weapons and had trained their crews to use them. He said he wasn’t able to go into any detail and say for example which airlines, or if there were TASERs on flights operating in and our of the UK.

While he was with me, Richard Jones’ mobile phone rang.

His ringtone was the sound of a TASER arcing; which is quite a startling sound when it happens when someone who sells TASER has just brought a box of kit into your house!

Mr Jones saw me note his ringtone on my pad of paper and asked me not to tweet and write about it. I’m happy to discuss things with anyone in confidence, and never breach such confidences; however that doesn’t in my view apply to Mr Jones’ ringtone (I have maintained confidences in relation to aspects of things we have discussed).

I think it says a lot about the type of people we’ve got bringing TASER weapons into this country, trying to sell them to our police forces, and being responsible for distributing and servicing them.

Mr Jones arrived dressed in black jeans, and a black t-shirt with a TASER logo, he said he’d just been TASER training with the police in London.

Mr Jones told me he didn’t like me calling the TASER weapons “weapons”; he said they were not weapons but “devices”.

Mr Jones gave me a TASER pen – nothing special just a promotional biro.

Opportunity to be TASERed

I was also offered me the opportunity to be TASERed, if I was prepared to visit the USA to do so. I declined. He also though said he could try and arrange it for me to observe Cambridgeshire Police’s non-firearms police TASER training, and I said I would be very interested in observing that.

Lastly, I was told Tactical Safety Responses Limited would be interested in buying the Taser.org.uk domain from me. No sum was mentioned, but Mr Jones suggested I should give any sum paid to charity (I didn’t understand why!). I said I’m not particularly keen to sell it.