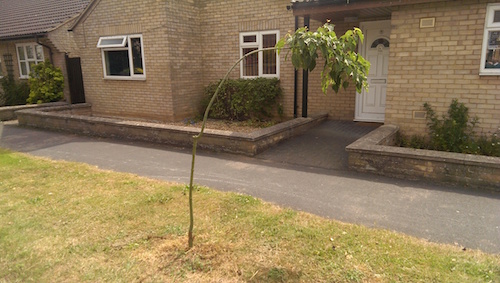 One of the many poor examples of public trees in Cambridge. (Fraser Road)

I have responded to Cambridge City Council’s consultation on its policies relating to trees in the city.

Tree management in Cambridge is currently in disarray. The city is littered with tree stumps, empty tree pits, sites where trees have been removed and not replaced and saplings which have failed to become established and are broken, leaning over, or otherwise in a very sorry state.

A major problem is that the arrangements under which the City Council manage the city’s highways trees have broken down leading to confusion between councillors as to which representatives and which councils are responsible for particular decisions and works. Astonishingly tens of thousands of pounds every year continues to move from the County to the City Council despite no written contract being in place.

Cambridge City Council’s ludicrously convoluted “tree protocol” is also dysfunctional as illustrated by the Alexandra Gardens trees debacle during which the planning committee refused to do what the full council asked of it, and to consider the council’s proposals as if the council was any other tree owner/applicant. The complexity of the protocol has confused many residents and councillors and resulted in it failing in its basic aim which was to ensure controversial decisions are made via a clear, transparent, and democratic process.

Fitting my Views to the Consultation Questions

I responded to the council’s consultation via their online questionnaire which began by presenting an idea for a “vision statement”:

To manage our city’s trees so as to maximise the benefits they offer us, whilst ensuring that the trees we leave for future generations, and the character they bring to our city, are at least as good as those we have inherited.

I agree with the proposed statement, but would like to add to it. Unfortunately that wasn’t one of the options given. I selected the nearest of the options presented and proposed adding references to decisions being made in a democratically accountable manner and the council conducting its tree related activities in as open and transparent a manner as possible.

The consultation asked about the council’s various roles in relation to trees and described its statutory functions relating to planning and enforcement as being the provision of a service. I stated I don’t see the council’s role in relation trees and the planning system, dealing with tree protection orders, applications for tree works in a conservation area etc, as one of providing a service. The council’s role there is one of a democratic regulator and a decision maker.

This consultation repeatedly states there is a contract with the County Council – if there is one it’s unwritten as a Freedom of Information Request asking for a copy recently failed to prompt its release.

The questions asked by the council prompted me to expand on my views on avenues of trees.

I suggested that rows of trees, and trees around squares or on roundabouts should be considered in a similar way to avenues. I want to see the features be retained somewhere in the area of the space in question into the future. Just as an avenue could be maintained via various techniques; trees on the boundary of a park could be maintained by having them on one boundary for a a few tens of decades, then when they begin to fail, replacing them on another boundary.

I suggested the approach taken needs to be specific to a particular location and seeking a city wide polity is not proportionate. I noted replacement trees on the Jesus Green plane tree avenue have rapidly become established and now successfully form an integral part of the feature.

Avenues of quicker growing trees could reasonably be replaced – say every other tree removed an replaced one year, then every other replaced in ten years later; repeating on say a thirty year cycle (which could be varied depending on the health of the trees). This approach might suit for example some varieties of ornamental cherries.

I would like to see some formal planting, of rows / avenues remain in the city’s major central green spaces. I don’t want to see the council give up on formal planting. The plane tree avenue on Jesus Green, the Victoria Avenue Horse Chestnuts, the Elms on Parker’s Piece are all iconic parts of the city of Cambridge. We should be ensuring that the city still has such awesome features in the future.

The council asked about planting larger more mature trees. I said I would like to see the council replace trees with more mature specimens in certain locations. I think too often the council puts in very weak small saplings which quickly fail and are not replaced.

Where possible I would like to see trees allowed to grow naturally. The city is full of heavily pruned and pollarded trees. I am aware this is often for safety reasons and this is reasonable in the case of trees on busy public spaces and growing over roads and paths. Those in more remote, and quieter, locations though could be left to grow more naturally and if a hazard is identified this could be marked with fencing or a signage.

The council proposed working with residents. I suggest the council carefully looks into how Friends Groups or Residents Associations are constituted and how they operate before entering into arrangements with them. Some are no more than one person entities invented to attempt to give more credibility to planning objections; others operate in an exclusive and secretive manner.

What the Manifestos Said

The majority of councillors on the city council are Labour, their 2015 manifesto stated they would:

The consultation I just responded to was apparently a consequence of that manifesto promise being worked on.

Continue to invest in the maintenance of trees, securing the future by planting more to provide for succession to those that fail;

When deciding how to vote those were the only positions on trees I was aware of and I couldn’t see a significant difference between them. Both appeared pro-tree.

I have written extensively about Cambridge’s trees. See my articles tagged trees or search for mentions of “trees” on my site or via a Google web search or a Google image search.

I also often write about trees on Twitter and have published many videos on YouTube of council meetings discussing Cambridge’s trees.