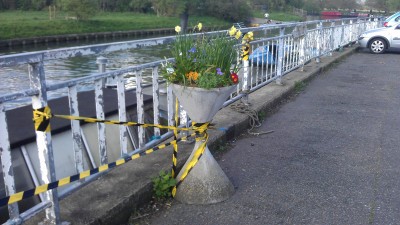 Riverside resident Marueen Symons attended Cambridge’s East Area Committee on the 10th of April. In the presence of Cambridgeshire Police’s Inspector Poppet, and councillors from Cambridge City Council and Cambridgeshire County Council Symons admitted to installing a concrete planter on the highway on Riverside to try and deter people parking in front of her house and obstructing her view of the river.

Astonishingly neither the police nor councillors challenged, or condemned, Symons’ actions.

In addition to installing the planter; Symons described how she has been writing letters to those parking their vehicles on the road. I recently saw one of these missives sellotaped to the window of a van: 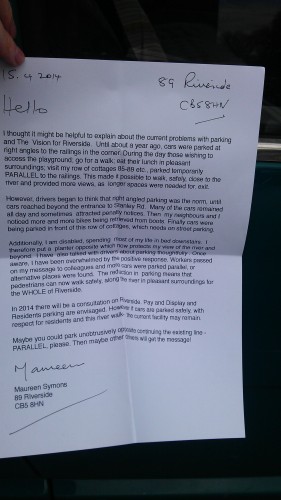 I thought it might be helpful to explain about the current problems with parking and The Vision for Riverside. Until about a year ago, cars were parked at right angles to the railings in the corner. During the day those wishing to access the playground; go for a walk; eat their lunch in the pleasant surroundings; visit my row of cottages 85-89 etc, parked temporarily PARALLEL to the railings. This made it possible to walk safely, close to the river and provided more views, as longer spaces were needed for exit.

However, drivers began to think that right angled parking was the norm, until cars reached beyond the entrance to Stanley Rd. Many of the cards remained all day and sometimes attracted penalty notices. Then my neighbours and I noticed more and more bikes being retrieved from boots. Finally cars were being parked in front of this row of cottages, which needs on street parking.

Additionally, I am disabled, spending most of my life in bed downstairs. I therefore put a planter opposite which now protects my view of the river and beyond. I have also talked with drivers about parking thoughtfully. Once aware, I have been overwhelmed by the positive response. Workers passed on my message to colleagues and more cars were parked parallel, or alternative places were found. The reduction in parking means pedestrians can now walk safely along the river in pleasant surroundings for the WHOLE of Riverside.

In 2014 there will be a consultation on Riverside. Pay and Display and Residents parking are envisaged. However if cars are parked safely, with respect for residents and this river walk the current facility may remain.

Maybe you could park unobtrusively oppose continuing the existing line – PARALLEL, please. Then maybe other drivers will get the message!

My Views and Comments