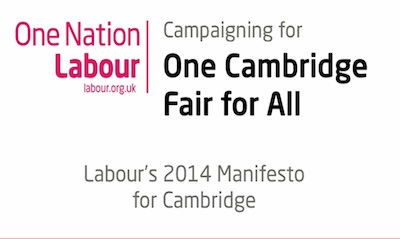 I’ve been looking into what we should expect in Cambridge if the majority of councillors elected to Cambridge City Council are members of the Labour Party following May’s elections.

The Labour Party have published a manifesto for the city council: One Cambridge – Fair for All. That’s not all we’ve got to go on, we can look at what they’ve been proposing in opposition, in particular Labour’s budget amendments which they presented at the City Council’s budget setting meeting on the 27th of February 2014.

Will We Notice A Difference?

The published materials do not suggest a major change to the way Cambridge is run would occur as a result of changing the party in the majority in the Guildhall from the Liberal Democrats to Labour. As yet Labour are only proposing altering spending priorities within the existing budget.

The primary service the council provides to residents, emptying the bins, would continue in its current form.

There is no proposal to redesign the council’s services from the ground up; starting with the question of what the people of Cambridge and others with an interest in the city want from the council. Labour are approaching the prospect of running the city from a point of view of making a tweaks, to the status quo.

I would rather see a ground up re-design; including moving to one council for Greater Cambridge (something which is not in Labour’s proposals). I think the approach of tinkering with what’s already in place results in a council which is out of touch with what’s needed, and is an approach which has resulted in what we have now with projects, and officers, being bolted on every-time an idea is introduced. I would like to see every budget setting meeting presented with a full organisational chart showing how many staff the council have and what they do; along with a breakdown of the full budget showing where every penny is spent. I think officers distract councillors from more significant reforms by focusing on peripheral changes and we need to elect stronger, more visionary, councillors.

I am concerned at a Labour administration would result in a change of tone from the City Council; and a move to greater “enforcement” and “regulation” and generally more interference from the city council in the way we live in Cambridge, with the council entering areas it doesn’t need to. I’ve written separate articles on two specific areas:

Labour’s core proposal was to take £688,860 of money which was allocated to the “Keep Cambridge Moving Fund” but had not been applied to any specific projects, and use it for other purposes. Labour proposed moving £500,000 of the unallocated money to a “Sharing Prosperity Fund”. The remit of the proposed new fund is given as:

To provide resources to fund fixed-term and one-off projects and proposals that fulfil the following criteria and underpin an Anti-Poverty Strategy that Labour proposes to develop in 2014.

Proposals to the fund (which can be made through the budget process by members or officers, subject to committee consideration) must contribute towards one of the following objectives:

Examples of projects Labour have said could be funded by their Sharing Prosperity Fund include:

The proposals for this new fund show it would only have the £500,000 put one year, in 2014/15, with it being topped up by £53,910 per year thereafter. One reason for this is Labour are linking the creation of the fund to central Government’s New Homes Bonus grants, which are not assured into the future.

Labour also proposed creating a £300,000 “Fixed-Term Priority Project Fund (FPPF)”; to separate ongoing revenue spending from non-ongoing, fixed-term projects, which can be funded from sources of funding which are not assured to continue into the future, such as the New Homes Bonus.

Other amendments to the council budgets Labour proposed included proposals to raise/save £227,110.00 per year, after they’ve had a time to take effect. These are broken down as follows:

As well as the budget proposals, the Labour manifesto adds, presumably at no extra cost, or proposing ideas which they don’t yet know how would be funded

Housing, rightly, is a substantial element of the Labour manifesto. Their promise:

My Views, Thoughts and Questions

Many of Labour’s proposals appear financially sensible, and are the kind of thing I would expect Cambridge Conservatives to propose including:

Martin Smart, the Market Ward resident who has, at the last minute, been selected as Labour’s candidate to represent King’s Hedges ward on Cambridge City Council, has written to those of us who live in the ward to say:

I am fully supportive of the aims of Cambridge Labour Party and it’s manifesto, “One Cambridge – Fair for All“.

Given an unwavering commitment to the party manifesto appears to be the entire offering proposed by Mr Smart, and some other Labour candidates around the city, it’s clearly a document worth getting to grips with.