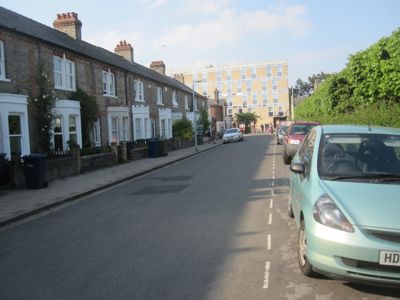 Cambridge Labour Party have in recent years proposed capping the number of shared houses permitted on any street, or part of a street, in Cambridge, and have proposed requiring properties shared by just three people be licensed by the council.

I have strongly opposed such excessive regulation as I fear it would reduce the availability of cheaper accommodation in the city, making living in Cambridge unaffordable for those in a position such as that I was in a few years ago.

I have previously written two articles on this subject:

As we come up to local council elections in May 2014 at which, it has been suggested there’s a good chance Labour may be elected to run the city council, I’ve been trying to understand Cambridge Labour’s current position on the regulation of shared houses.

The Labour Party have published a manifesto for the city council: One Cambridge – Fair for All.

There is no manifesto commitment to cap the number of shared houses in an area, or on a certain street, as Labour had previously proposed, and which had been included in their 2012 manifesto. There is no longer any promise to increase regulation of shared houses either. However Labour’s current manifesto for Cambridge does not rule either of these options out, and those keen to see such approaches could well be encouraged by what they read. The manifesto promises Labour would:

The first bullet point appears to relate to licencing; but it does not give me the detail I want. It doesn’t answer the question of if Labour proposes requiring more shared houses to be licenced.

What is apparently being referred to in the second point is policy 48 of the draft Local Plan which deals with how the council will consider planning applications for a change of use to a property where six unrelated individuals will live. Policy 5/7 of the current local plan states:

The proposed new plan states such houses of multiple occupation will be supported where the proposal:

Appropriate management arrangements should be put in place in order to monitor and minimise antisocial behaviour and adverse impact on local residents. A condition to this effect may be applied to any planning consent.

It’s not clear what the Labour manifesto means when it says: “Implement the policies in respect to HMOs” if it means simply make planning decisions following the proposed new local plan, then that’s hardly worth saying, that’s the default position and what would be expected of them. If it’s a confirmation that they won’t seek to amend the local plan and are happy with it, I think that’s good. I think the plan does well to give councillors considering specific applications the ability to make decisions based on the particular circumstances of an individual property.

Use the powers provided by the last Labour government to extend Houses in Multiple Occupation (HMO) licensing, to improve standards for tenants and the management standards of private landlords.

While that line isn’t in the current manifesto; what they are currently saying appears to leave that approach open as a possibility. There appears to me to be a lack of clarity, openness and honesty about Labour’s proposals, or lack of them. It may be that in fact Labour don’t have a an idea yet of what they might do beyond “review the council’s policies”.

I have been concerned by statements by Labour candidate for Romsey Dave Baigent, who, while using the public speaking slot at a Cambridge City Council meeting on the 3rd of April appeared not to have appreciated that many of those who share houses are not students, but that shared houses are a significant source of affordable housing for many of those working in the city. See: a Cambridge News report following the exchange.

There is significant hatred from some Cambridge residents towards students; this regularly bubbles above the surface at the city’s public meetings including area committees. Often it appears that the hate (perhaps that’s too strong and I should just say “wrath”?) is directed at young people in general, and house sharers, with other residents labeling them “students” either out of a misunderstanding or using the term “student” in derogatory manner.

I would have liked to have seen the Labour manifesto stressing the importance of greater harmony between the different groups of people who live in the city, and making that one of the aims of any regulation.