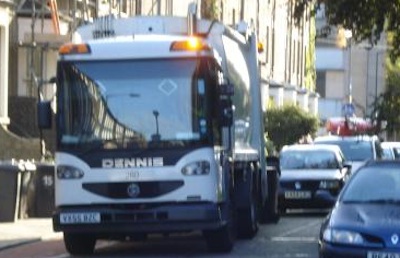 Some of Cambridge City Council’s thousand or so staff empty the bins; others have less critical roles. [Image by timbo on CycleStreets (CC by sa)]

If the majority of those elected to Cambridge City Council are members of the Labour Party following May’s elections, Labour will get to implement their manifesto for Cambridge we will see the creation of a number of new city council officer positions:

Labour propose creating the new post of “Living Wage Promotion Officer” within Cambridge City Council council. Someone will be employed to lobby businesses, colleges and other organisations in the city to pay at least the “living wage“, currently £7.65/hour (the minimum wage is £6.31/hour for those over 21). The cost of employing the officer will be £39,280 over two years and they are to be given a £14,000 costs and publicity budget.

My view is this campaigning officer position is a completely inappropriate use of public money. The country is still borrowing to support public spending, and people have to work hard to earn the money taken in taxes. I want my taxes to be spent on the essentials, things people can’t do acting alone and need the state to provide; emptying the bins, providing the best health service possible, maintaining and improving the roads. Councillors spending money on campaigning like this mean there is less money available for the important things.

I think we have significant problems within our society with employers behaving immorally; I don’t think though that creating another public sector non-job for a campaigner is the right approach to dealing with it. The focus should be on ensuring our employment law, and benefits system don’t allow, or encourage, exploitation.

A living wage promotion officer is something I’d expect to perhaps find within a campaign group, or political party, not a local council.

Labour propose spending £45,000 over two years on a “Chesterton Co-ordinator”; modeled on the “Mill Road Co-ordinator” post introduced by the Liberal Democrats.

The news release accompanying the appointment of Ceri Littlechild as the Mill Road Co-ordinator explains:

The Mill Road Coordinator will provide a link between existing residents groups and businesses, and is tasked with forming an Association including representatives from all of the community groups and independent traders. Ceri will be working with local businesses and residents to develop a partnership with the City and County Councils, and will be helping the community to find funding for improvement projects that they want to see in the area.

Residents, and businesses are capable of forming their own associations and groups if they see a benefit in doing so. I want to see our councils being responsive to proposals for improvement projects, but that process should be accessible to all and it shouldn’t be so bureaucratic and complex that a specific officer is required to help people through it.

While Mill Road has a concentration of shops, pubs, restaurants, and takeaways, Chesterton is a very different area where the businesses that are present are spread throughout the residential area and have fewer direct relationships with each other than you find on Mill Road. My concern is that it will become another, unnecessary, campaigning position

Labour propose spending £100,000 on an officer, and activities, aimed at promoting the benefits of changing to a water meter.

Surely this is an area where people need to take individual responsibility and make a decision on if having a water meter installed is best for them. If anyone is responsible for promoting the availability of free water meters to home owners it ought be the water companies.

Perhaps more effective, and free, would be simply removing the need for council tenants to get permission to install a water meter?

Labour propose doubling the number of “public realm enforcement officers”, charged with tackling littering and dog mess, from three to six at a cost of £118,700 per year.

I think this is indicative of the tone of a Labour council; and if the city is run by Labour we could see more intrusive state “enforcement”.

I’m personally surprised the council employ any enforcement officers; I’ve lived in the city for over a decade and I’ve never come across one; and I’ve regularly been on Jesus Green at times when it has been suffering from extreme littering. I don’t think councillors are generally aware of the officers either as they’ve never been mentioned at any of the many public meetings I’ve attended where littering and dog mess have been discussed.

At a recent North Area Committee meeting enforcement officers with CCTV cameras in their vehicles being deployed to tackle pavement parking were mentioned.

My view is policing ought be done by the police and I’m concerned by forays by local councils into the realms of policing. I’ve supported Cambridge City Council’s stance to-date of not giving their “Rangers” enforcement powers (see a related article).

I’d like to see more details of what uniforms the Labour party propose dressing their new officers up in; and what powers they intend to give them, and specifically if they intend to seek police powers for them.

Labour propose spending £16,700 more per year to make the council’s dog warden full rather than part time and to spend an extra £5,000 on an advertising campaign, supporting a tougher approach to dog fouling.

Dealing with stray, and dangerous, dogs is clearly something some part of the state needs to take responsibility for in every area. Currently this appears to be one of the many areas councils and the police try and pass responsibility for onto each other.

I don’t see the need for specific anti-dog fouling enforcement efforts by a dog-warden and would have thought it better if our city was policed with one type of officer patrolling empowered to tackle whatever they come across be it violent crime, burglary, obstructive parking, dog fouling or littering. (I think pay and display parking enforcement is distinct as that requires a different pattern of patrol).

This appears to me like something where the police and council ought get together and work out the cheapest, and most effective, way of providing the required service. I’d be surprised if a city the size of Cambridge needed it’s own dedicated full time dog warden. It might even be a service charities such as the RSPCA or Wood Green might be interested in bidding to provide, giving them an additional source of income?

No Cycling and Walking Officer

Sometimes what at first glance appears to be a non-job can turn out to be quite important. I remember shocked and appalled the first time I learned Cambridge City Council had a “Walking and Cycling Promotion and Development Officer“. That officer post no longer exists, and Labour, despite proposing to create a raft of new positions, are not proposing to reinstate it. The cycling and walking officer role did show up the lack of consideration of cycling and walking related matters in relation to planning applications, and projects in public spaces. Hopefully the existence of that post for a few years has prompted all officers throughout the council to properly consider the impact of proposals on pedestrians and cyclists but it sometimes appears this isn’t the case. The Cambridge Cycling Campaign has a good page on the Cambridge City Council cycling posts.

Cambridge City Council has legions of tree officers (who don’t wield chainsaws), “anti-social behaviour officers”, officers who stand around on play grounds in case children need help playing, officers who literally talk rubbish including a “Recycling and Waste Minimisation Officer” and many more, most of whom I don’t think we’d miss, and the city would function without. I don’t think Cambridge City Council have a director of values, but during a recent re-organisation they considered creating the post of “Director of Space”.

To help prevent councils becoming full of people doing non-jobs I would like to see the full organisational charts published, and specifically considered when councillors set plans and budgets.

Details of Labour’s spending proposals can be found in the papers from the Cambridge City Council budget setting meeting held on the 27th of February 2014.