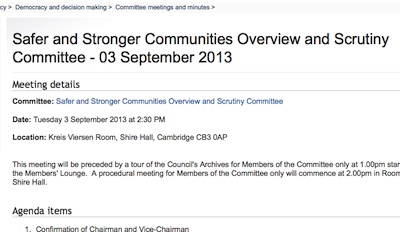 Councillors on the police scrutiny committee, which they call the Safer and Stronger Communities Overview and Scrutiny Committee are to discuss their future work programme at their meeting on the 3rd of September 2013.

A proposal before the meeting suggests calling in the Police and Crime Commissioner and Chief Constable for a grilling by councillors in public every three months.

The scrutiny committee is chaired by UKIP Councillor Paul Bullen.

I have asked to use the public speaking slot at the meeting to make some suggestions, I wrote:

I would like to use the public speaking opportunity at the Safer and Stronger Communities Overview and Scrutiny Committee on the 3rd of September 2013 to make some suggestions on the committee’s work programme.

The Safer and Stronger Communities Overview and Scrutiny Committee could also look at how the Police and Crime Panel is operating and encourage them to adopt a more comprehensive approach?

I can see the Safer and Stronger Communities Overview and Scrutiny Committee already has non-emergency call handling on its work programme. When the committee comes to investigate this I would like to see details of any decision taken by the commissioner revealed (the commissioner has repeatedly stated he took action to resolve the problems). The committee has in the past[3] asked the police to provide details on call waiting times where their targets are not met; what is required is data showing the full distribution of call wait times both for the call being initially answered and for any “second wait”. I would like to see such data from both before and after any intervention by the commissioner.

I am concerned by many of the public statements by the Police and Crime Commissioner which appear inconsistent with information published by other sources. I am concerned by the commissioner’s claims the costs of his office will be less than the costs of the Police Authority; questions need to be asked about what he is considering as the costs of the Police Authority. Is it reasonable to include members’ allowances and expenses, or to cite a budgeted cost even now information on actual spending is available?[5] On another subject the way the commissioner has described the “ECINs” data sharing website has been dramatically at odds with information provided to Cambridge’s Community Safety Partnership, the commissioner has stated the only information shared is if an individual has come into contact with an organisation, whereas the CSP papers suggest sharing of more details.[6]

In relation to the Commisioner’s new “ALERT” / eCops service the commissioner has suggested to the police and crime panel it will provide comprehensive information on at least burglaries, car crime and anti-social behaviour; he also told them it was developed by the Home Office when justifying his approach [7] (something the Home Office deny[8]). Perhaps the Safer and Stronger Communities Overview and Scrutiny Committee could seek to challenge the commissioner on the accuracy of some of his public statements and urge the Police and Crime Panel to do this more too?

Details of the council’s “Public speaking at Overview and Scrutiny Committees” are currently unavailable as the relvent link on the council’s How you can play your part webpage linked from the agenda is broken.

12 comments/updates on “Councillors to Step Up Police Scrutiny”