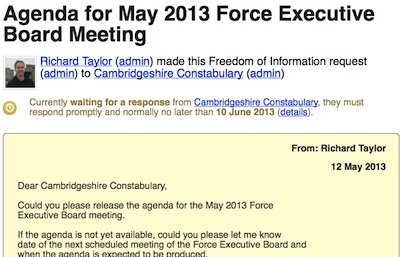 Since November 2012, when Police Authorities were abolished and Police and Crime Commissioners introduced, I have been making regular Freedom of Information requests for the meeting papers of Cambridgeshire Police’s Force Executive Board.

One effect of the transition to Police and Crime Commissioners has been that information which was previously routinely made public on a regular basis has ceased to be available. Prior to November 2012 many key papers considered by the Force Executive Board went on to become openly published Police Authority Papers

I have been informed by the Police that they had understood Police and Crime Commissioner Graham Bright had a “transparency agenda” and that “everything we sent across would be published”, however they were then told “the commissioner will not release most papers”.

My requests have all been made in public using mySociety’s Freedom of Information website WhatDoTheyKnow.com so the requests and responses are available publicly online: November 2012 and before, December 2012, January 2013, February 2013, March 2013, April 2013, May 2013.

I had previously, in February 2012 requested the force publish the papers for the period since June 2011 which prompted a substantial update of the material the force publishes online; as has some of my subsequent requests.

My Freedom of Information requests have been rejected on various grounds; primarily citing an intent to publish the information in the future (although no plans for such publication have been provided, and no publication of the meeting papers beyond agendas and minutes has occurred). Latterly, in relation to the April 2013 meeting my request has been deemed vexatious, citing the fact I have been making regular requests for the papers of the meeting.

Bizarrely the force are now inviting requests for certain board papers which they describe as “open” via requests which are not formal FOI requests*. This makes no sense at all as any request for information in writing is a valid FOI request; it is up to the force internally how it wishes to deal with any request.

The force have also claimed to have updated their publication scheme a number of times in response to my requests; however their website has throughout suggested they have adopted an ACPO model publication scheme, unamended. Their practice in terms of proactive publication also does not appeared to have changed.

For a period the force maintained that Force Executive Board meetings each approved the previous meeting’s agenda for publication; though they have now admitted this was false.

What I Think Should Happen

Agendas for Force Executive Board should be published in advance of the meetings. Ideally this would be in the form of a living document, getting more precise as the meeting date approaches. Alternatively there could be an “agenda plan”; a note of the major agenda items at the next meeting at the end of each meeting, as well as the publication of the agenda itself when it is produced, presumably a few days, if not a week, before the meetings.

Meeting papers which are considered “open” should be pro-actively published alongside the agendas, or as they become available.

Draft minutes should be published as soon as they are available.

Meeting papers which are considered “closed”, determined on a clearly set out basis, such as documents where the force consider exemptions in the FOI Act which would allow them not to release them in full on request apply to could not be published pro-actively; but could, still be the subject of FOI requests at which point redaction would have to be considered. In such cases I would suggest any covering papers, summaries, or similar ought be considered for proactive release separately from documents as a whole.

I fully understand that redaction can be time consuming. I think that it is a flaw in the Freedom of Information Act that it does not contain a limit on the amount of redaction time a request can result in a public body having to spend (a point I have made previously).

I think the force ought take a position of pro-actively publishing by default as much information as possible; this would reduce the number of FOI requests it would be necessary to make and those requests which were needed could be more precise and focused.

I stress that meeting agendas have not been available online prior to my making any requests for them and other papers; had they been I may have been able to narrow my requests. In my latest request, relating to the May 2013 meeting papers, I have ,just requested the agenda initially with a view to making further requests if required.

Major articles in the local press have been based on material present in Force Executive Board papers, the following Cambridge Evening News articles are examples:

Bike theft in Cambridge is out of control, police boss says – 6 March 2013

There is also a public interest in the Police and Crime Commissioner’s attendance, and use, of the Force Executive Board.

Having my Request Deemed Vexatious

While this came as quite a shock, it is just a technical term used in the Freedom of Information Act. Unfortunately if you get involved in debate about how our society should be run this is the kind of thing which you risk facing, it’s another one to add to the list along with being decried as “anti-police” by my local police sergeant when suggesting policing priorities at the North Area Committee and being thrown out of a Police Authority meeting for asking for a copy of the papers they were discussing.