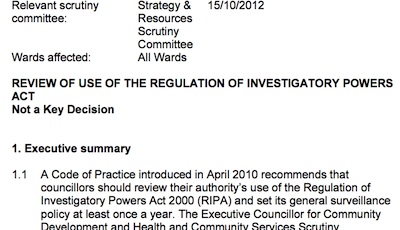 A report on Cambridge City Council’s use of covert surveillance is to be taken to the council’s Strategy and Resources Committee on Monday the 15th of October at 17.00 in the Guildhall.

The key message from the report is simply:

The report however is accompanied by a “background document“, a committee paper from a year ago, in October 2011, which details how the council accidentally did something it now considers amounts to intrusive surveillance, (something the council is not permitted to authorise). The section states:

The City Council is very sparing in its use of RIPA powers. In fact, it has authorised use of RIPA powers on only one occasion since October 2008 – in February 2010. The authorisation on that occasion was for directed surveillance by covert CCTV as part of co-operation with a Police investigation into incidents of serious domestic assault. Covert CCTV was installed in the victim’s home with her full co- operation to gather evidence against the perpetrator. Whilst the officers were satisfied that the surveillance was appropriate in supporting the victim and in gathering evidence of serious criminal behaviour, the Police, rather than the City Council should have authorised the surveillance. Technically, this amounted to intrusive surveillance, which the Police can authorise, but the Council cannot. The guidance has been strengthened to emphasise this by ensuring that applications are scrutinised by the Head of Legal Services before they are considered by an authorising officer.

I have the following questions and concerns in relation to this:

The minutes of the October 2011 meeting at which this was first raised state:

The Director of Customer and Community Services confirmed that a conservative approach had been taken and most requests to RIPA powers had been refused. Permission had been given on one occasion and with hindsight permission for this request required Police approval. Following that incident, the controls had been tightened and there had been no further use of RIPA.

Despite standing on platforms promising voters they will stand up for civil liberties and the rule of law local Liberal Democrat councillors have been defending their council’s actions.

Cllr Ian Manning appears to be suggesting it was acceptable that the council deployed its covert CCTV in this instance, despite it being illegal for the council to do so, because there was some co-operation with the police involved in the investigation. Cllr Manning wrote:

The report does not say that in this case the police requested the City Council to deploy its covert surveillance equipment. That the council officers were working with the police in relation to the investigation is far from the same as saying the police asked for the surveillance. Despite councillors asking for statistics on refused applications this is something officers continue to fail to provide in their reports.

this was two years ago, and was ended as soon as cllrs found out about it

Clearly councillors did know about this, and discussed it in a public meeting for which the papers were available online, a year ago and they sought assurances then that it would stop. The fact this recently made the press when it was uncovered shows how important it is for more people to follow and publicise what goes on in the council to reduce the chance of things slipping past. I would like to see the council themselves do more to make what they do accessible – for example writing in an accessible and timely manner about decisions taken at council meetings. This was newsworthy material which wasn’t spotted, despite it being technically in the public domain, for over a year.

There is no suggestion in the published material that an application to authorise the surveillance was made at all, so it is not a case of it being signed off by the wrong person. The council cannot authorise intrusive covert surveillance in any case and had the council officer involved managed to make an application to the appropriate police officer 9who could have authorised such use) I’m sure they would have been told to go away.

If city council officers are routinely conducting intrusive surveillance on behalf of the police then that is something councillors and the public ought be told.

It appears Liberal Democrat Cllr Rosenstiel may be saying that if the police had approached the council with a valid RIPA authorisation for intrusive surveillance from within the police than the council would have been right to co-operate and perhaps loan the equipment to the police, however that’s far from what is being reported to have happened .

Requiring an authorisation from a magistrate, as will be required for all council surveillance regulated by RIPA from November 2012 will provide an extra safeguard, but the work of the magistrates will almost certainly not be done in public (in the same way as search warrants are not considered in open court for obvious reasons), and it is still councillors who will need to review the council’s activity in the public domain.

The October 2012 report to councillors recommends councillors require the council to try even harder to educate its staff about what is and is not acceptable in terms of covert surveillance “to ensure that surveillance is only authorised in accordance with RIPA”.

Some of My Related Previous Articles and Activism: