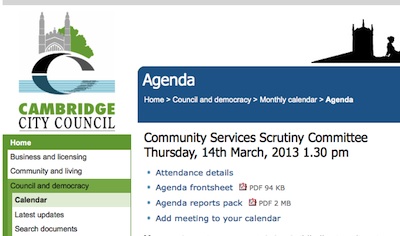 I have just sent the following email to Cambridge City Council:

I would like to register to use the public speaking slot at Cambridge City Council’s Community Services Scrutiny Committee on Thursday, 14th March, 2013 at 1.30 pm. I would like to ask about a subject which is not on the agenda: the open forum at area committees.

I understand that while not required, it can be helpful to explain in advance what it is I would like to raise:

Over the last year or so I have used the open forum slots at the North, and West/Central, Area Committees to suggest that the committees create a mechanism which enable people to raise matters in public with the committee other than using the “open forum” in person. I received positive responses from many councillors; but no action has been taken; so would like to make the suggestion again, here, centrally.

I think there is an opportunity to make the “open forum” section at the area committees speedier, and more effective. Raising matters online via a public forum could allow some debate and discussion, and perhaps even action, before the meeting. In some cases all that would need to happen at the meeting itsself is for what has happened to be noted. In other cases any discussion at the meeting could be better informed. Accepting items for the open forum via a route other than attending in person might enable those who cannot, or don’t want to, attend themselves to still make use of the area committee system.

As well as general open forum items; I think making suggestions for, and discussing, local policing priorities and publicly holding the police to account for their performance, is a specific area in which it would be valuable to be able to communicate with area committees in public without attending in person.

Elsewhere in Cambridgeshire that the County Council have negotiated a service level agreement with the police and fire service under which they have agreed to respond to matters raised via the ShapeYourPlace.org set of websites within ten working days*. If such an agreement with bodies such as those, and perhaps others, including councils the ambulance service, the wider NHS etc., could be agreed in relation to Cambridge I think this would be useful. I think many matters raised during the “open forum” slots at area committees would benefit from such input from other bodies.

I note when the council previously put resources into creating a North Area Committee Facebook page it didn’t involve other public bodies, and didn’t make the page a formal route though which representations could be made to the committee; had it done so I think it might have been more successful.

I would like to stress I’m not calling for a ShapeYourPlace instance for Cambridge or it’s composite areas. I’d suggest looking to where people are already discussing relevant matters, ie to Facebook, the Cambridge News, Cambridge Cycling Campaign, Cambridge Past Present and Future and others and integrating with their offerings and activities.

Area committees simply accepting correspondence, publishing it, and considering or noting it in public during the open forum would be a significant step.