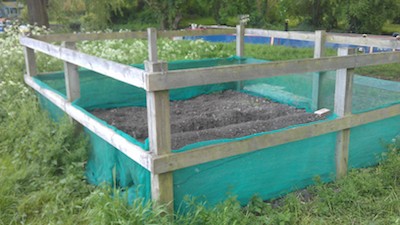 An area of Stourbridge Common in Cambridge has been turned into a vegetable patch.

It appears someone has taken over a patch of Stourbridge Common in Cambridge and is using it as vegetable garden. The patch of common land in question is within a disused tree-guard. Someone has has added what looks like anti-rabbit mesh and planted what appear to be potatoes.

If this has been done without the permission of Cambridge City Council I think the council needs to put a stop to it and get those responsible to restore the common to its original state. In the event of refusal to co-operate the council and police should look at the options for prosecution, or if those involved are holders of mooring licenses, the council should take action for breach of their contract.

If we had people digging up the city’s commons at will to plant vegetables we’d soon be in a state of chaos.