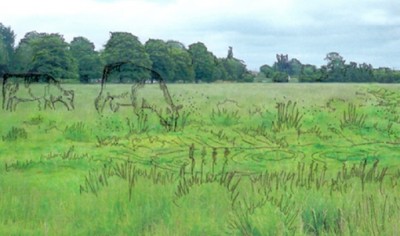 Artists impression of muddier “scrape” proposed for Stourbridge Common. Perhaps the astronomical cost of the scheme can be explained by the development of the active camouflage suits for the “invisible” cows seen in the illustration?

Cambridge City Council is proposing to spend £15,000 on making a muddy bit of Stourbridge Common even muddier.

The published proposal, which the council are currently seeking comments on, states:

Cambridge City Council is proposing to create a small ‘scrape’ in the Common, by excavating a small area of land within an existing wet area.

The only other elements of the project are some bird and bat boxes along with:

As far as council projects to develop the city’s green spaces go this one, while appearing to me to be a mad waste of public money, otherwise appears mostly harmless, at least it doesn’t involve cutting down swathes of trees or tarmacking over lots of green space as previous schemes for “developing” green areas in the city have done.

£15K appears incredibly expensive for 3m of boardwalk and some scraping which would presumably involve someone having about ten minutes of fun with a mini-digger.

As the council says this bit of the common is already wet. It regularly floods, and is muddy for many months of the year.

If spending £15,000 on some extra mud is high up councillors’ spending priorities there’s no sign that our local councillors in Cambridge are having their decisions influenced by any sense money is tight; despite the fact £1 in every £7 spent by the public sector is borrowed. 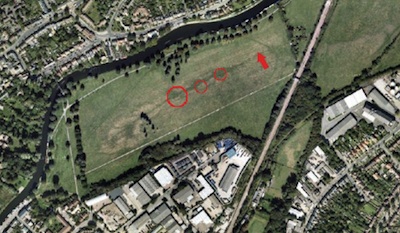 I can only imagine that this kind of project is the result of having far too many council officers sitting around having to invent things to do to pass the time and justify their employment. Cambridge City Council employs swathes of officers to manage the city’s green spaces including a Nature Conservation Officer, a Conservation Projects Officer (Guy Belcher), a Green Space Officer (Sarah Tovell), a Green Space Manager (Alistair Wilson) and a Pinder. I suspect the council’s dedicated Sustainable Drainage Engineer who works on the council’s nature reserves might find a role in the project and it’s Urban Growth Project Manager (Tim Wetherfield) whose name is on the meeting papers. From time to time groups of these managers can be seen along with their colleagues monitoring those actually maintaining the commons, doing things like cutting the grass. The council doesn’t publish information which makes it easy to see how many people are employed and how much money is being spent in particular areas of its operations.

Something else which could be driving this bizarre throwing away of public money is the way councillors treat taxes on new development as bonus cash. My view is development taxes ought only be used to enable the provision of something, such as a new road, without which permission for a development would not be granted. I don’t think a muddier bit of common is a pre-requisite for any building in the city. Development taxes are a tax on new homes, they dampen the housing market, and make it less likely for new homes to get built. The slightly muddier common will be provided at the expense of those in Cambridge without an appropriate place to live. 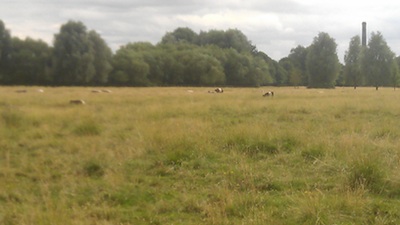 More of My Thoughts

The council is currently running a consultation on the proposal which is open until the 1st of September 2013. The consultation page notes that East Area Committee councillors have however already approved the scheme which appears to make the consultation exercise redundant.

The East Area Committee councillors who, according to meeting minutes, last approved progress on the scheme, in June 2013 were: Blencowe, Owers, Benstead, Brown, Hart, Herbert, Johnson, Moghadas, Roberts, Saunders, Smart, Kavanagh, Walsh and Whitehead. (The degree to which those County Councillors present have influence on spending city council money is debatable, though the minutes record no dissent).