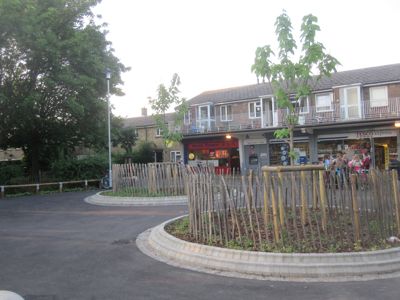 At 17.45 on Wednesday the 23rd of November 2011 the north Cambridge neighbourhood policing sergeant, Jason Wragg, sent the following to some of the residents of the area who have signed up to the ECops email system:

GOOD NEWS
Your north police officers, PC Tom Gallagher and PC Darren Goodwin caught someone who was shoplifting from Tesco Express on Campkin Road yesterday. The male was arrested and interviewed, and was made (through restorative justice) to clear up litter outside Tescos.

As often happens with policing related matters there isn’t as much information available as would be desirable in order to comment.

If say this was a child picking up some sweets or food while shopping with their family then I think some rapid reparation in the form of an apology and collecting trollies or cleaning baskets might well be proportional and be the best option for all involved, including wider society. It might even have been appropriate for the police to say there was no need for them, or the wider criminal justice system to get involved.

However this looks like a more serious occurrence as there is no mention of the offender being a child/youth, and the police officers clearly initially considered arrest was appropriate.

Cambridgeshire Police have stated they use restorative justice disposals where the victim of the crime agrees to its use. I wonder at what level within Tesco the use of a restorative justice disposal in this case was approved. I am surprised if Tesco are, as suggested by this case, taking a less tough stance against shoplifters, from signs in their shops I’ve gained the impression that they were keen on prosecuting shoplifters, and where the police and/or fail to take action using the civil courts to obtain compensation. I wonder if approval was given by a local checkout operator, or if Tesco have adopted a corporate policy of letting shoplifters off in return for picking up some litter outside their stores.

Was RJ Offered or Imposed on the Offender?

Sgt Wragg notes that the arrested male was *made* to clear up the litter. I would be very concerned if this was actually the case and the individual in question was not in-fact offered the “restorative” option, as I understood what was being proposed both the victim and offender have to agree to the application of a restorative justice disposal. The key principles I would like to see adhered to here is that innocent people should have the opportunity to defend themselves in court (preferably without risking a harsher penalty, if found guilty, for doing so), and that the police shouldn’t have free reign to act as judge and jury, the either party involved ought be able to opt to go to court.

This was not a restorative justice disposal of the “instant reparation”, “within the hour“, variety which Cambridgeshire Police have told Cambridgeshire Police Authority they are using. This was though an out of court disposal, with the police alone, not the courts, deciding on the penalty.

Restorative justice means this individual will not be given a criminal record, and if he faces magistrates in the future for other offences they won’t be made aware of this one.

Effectively the punishment imposed was community service. The magistrates court would have been able to hand down such a sentence if they thought it was appropriate. I’m wondering why that route wasn’t taken and if our courts and probation systems (the latter run community service sentences) are seen as too slow and paperwork heavy by our police? I am concerned by the avoidance of court, and do not want to see the police taking on the role of the courts.

I think it is excellent that the police, who are usually excessively secretive, have shared this information on a real example of how they are using restorative justice disposals. I am though concerned about the message sent out by this action that there are no serious consequences to shoplifting from Tesco on Campkin Road (assuming it’s the first time an individual has been caught – as the police say they only give people one chance at restorative justice, even though they use it for those who’ve committed multiple offences ).

I would like to see the police be much more open about their policies on restorative justice disposals, and about cases where they have actually been used.

One response to “Shoplifting Decriminalised in North Cambridge”