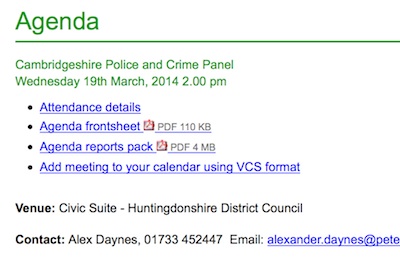 I have submitted the following questions to Cambridgeshire Police and Crime Panel’s meeting on the 19th of March 2014:

Expanding on the questions

Expanding on the questions ought be possible when presenting them in person at the meeting and when asking follow-up questions.

I attempted to use the public participation agenda item at the last meeting to make a statement and suggest both specific items for scrutiny, and approaches the panel could take to identify items for scrutiny however my attempt to do this was largely thwarted by the panel’s narrow terms of reference. The panel’s secretariat initially unilaterally rejected my submission without reference to any panel members; my submission would have been silently rejected had I not submitted subsequent questions about the rejection. I note my submission also could have been derailed had I addressed it to panel chairman (who turned out to be absent from the meeting).

I would like to see the panel assisting the public in holding the commissioner to account and considering suggestions of items for scrutiny from the public.

I note Cambridge City Council’s public speaking slots all permit either questions or statements and Cambridgeshire County Council has a system for members of the public to suggest items for scrutiny.

The panel publish current contact details on their website; however I note the webpage for the agenda for the 19 March 2014 meeting, and the panel’s main webpage gives the contact email address of an officer who left the panel’s secretariat in late 2013.

While the Police and Crime Panel have latterly included a “Public Questions” item on their agenda there is no note on agendas pointing to the rules for public participation; there is nothing to prompt those reading the agenda to refer to the panel’s rules of procedure where the rules on public questions are set out. When I first attended a local government meeting with a public questions slot on the agenda I wasn’t aware of any requirement to submit questions in advance so wasn’t able to raise the point I’d attended to to make.

Currently the rules of procedure do not ensure the panel’s agenda and papers are published prior to the deadline for non urgent public questions. I would like to see questions and statements on agenda items accepted so long as they are notified to the chairman or officers prior to the start of the meeting.

I would also question if rule 7.6 of the panel’s rules of procedure requiring the chairman to record decisions not to allow public submissions for specified reasons in the minutes. I would suggest this rule is expanded to all decisions to reject public submissions.

I note the action point updates in draft minutes from the 5 February 2014 meeting of the panel reveal the Police and Crime Commissioner has responded to the panel following my submission to that meeting. The reply has not been sent to me, nor has it been published by the panel. I would like to suggest the panel does proactively publish such replies from the commissioner.

I suspect a review of rejected questions might prompt the panel to review its decision not to allow questions to be asked of the Police and Crime Commissioner. Cambridgeshire’s Police and Crime Commissioner, unlike other commissioners for example in Kent and Essex, isn’t holding public question time events himself. I think it would be right to separate such events from the routine business of the panel, but holding such events would be one way the panel could enable the public to benefit from the panel’s powers to require the commissioner to answer questions.

What Aspects of the Commissioner’s Role Does the Panel Consider Outside its Remit?

At the last meeting of the panel acting chairman Cllr Jason Ablewhite stated:

“the commissioner’s diary, that’s not, frankly, our concern at all. That’s a politically accountable thing and it’s up to the electorate if they feel that’s the case and not a scrutiny panel to all intents and purposes. “

The panel went on, later in the meeting, to recommend the commissioner proactively publish in advance details of when his outreach worker is to attend public meetings of town and parish councils.

I find it inconsistent for the panel to take the position the outreach worker’s diary is a matter for the panel, but the commissioner’s diary is not. (One of the things Cllr Ablewhite appeared to be dismissing in his comment was my suggestion the panel recommend the commissioner publish details of his upcoming official engagements, such as attendance at public council meetings).

In light of this I’d like to ask: Which aspects of the Police and Crime Commissioner’s role does the panel consider are for the electorate, rather than the panel, to hold the commissioner to account in relation to?

I note the commissioner has now begun publishing, in retrospect, some of the information which previously was released only via FOI requests for his official diary. This makes it even easier for the panel to review the content of this material when seeking to identify items for scrutiny.

Members of the public are restricted to two questions per meeting of the Police and Crime Panel. Further questions I’d like to see addressed include: