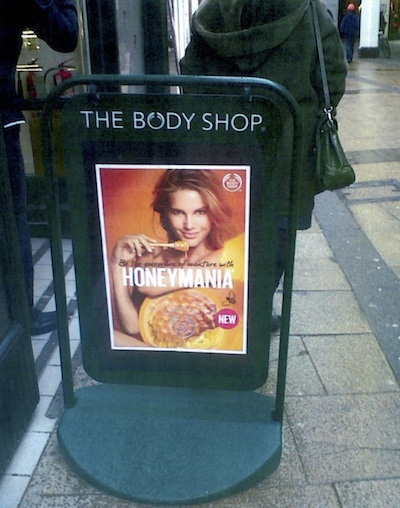 Liberal Democrat run Cambridge City Council has just approved permission for The Body Shop to place a sign on the pavement of Petty Cury, one of the city’s main shopping streets. The approval comes despite recent high profile campaigns from the Liberal Democrats on the subject of making the city’s pavements safer, including by removing such obstacles.

The application from The Body Shop asked for permission for a “street sign on wheels”.

The wheeled sign would constitute an obstruction on the public highway and has potential to endanger or inconvenience those with a visual disability and therefore the Highway Authority recommends that unless and until the application is amended to remove the proposal for the wheeled sign the application be REFUSED planning permission.

Reason: Impact upon the safe and efficient operation of the public highway.

The street sign on wheels is also not supported as it is additional street clutter.

The street sign on wheels and the illumination of the projecting sign are not supported as they do not comply with Conservation policies.

Shop owners in Cambridge can only have an A-board if it is situated on private land and not on the highway, or pavement. A-boards can cause an obstruction to passers-by, especially those with a visual impairment. They can therefore be dangerous, particularly where a pavement is narrow.

Cambridgeshire County Council’s policy (to which I can only offer a Google Cache link as their site is very broken following a recent redesign) is:

Advertising signs should not be permitted on the highway.

The approval of the sign, apparently by planning officers, comes despite Cambridge’s Liberal Democrat MP recently running a high profile campaign, and speaking in Parliament, on the subject of things which make our pavements more difficult and dangerous, especially for the disabled, elderly and those in wheelchairs, to use.

Julian Huppert, and Cllr Sian Reid, have been speaking on this issue for some time, A post on Huppert’s website from 2010 states:

Julian pushed this issue as a county councillor and chair of the Cambridge Transport Area Joint Committee and Cllr Reid has also been championing the cause for a number of years. Their joint pressure has led to thousands of signs being removed.

“Streets which are full of clutter become obstacle courses for pedestrians and put their safety at risk,”


“They should be pleasant places, full of character not advertising hoardings.”

No report weighing up the pros and cons of the application has yet been published. No decision notice has been published either. There is always a chance that the information on the council’s website is inaccurate or incomplete, but I think it’s reasonable to comment on what’s there. Hopefully commenting will prompt more openness and encourage officers to post all the material online.

Cambridge City Council now run planning on an online only basis; if documents are not available online they are simply unavailable – there is no paper planning file.

It appears councillors have left the decision up to their officers; they have neither taken the opportunity to make the decision themselves in public nor have any of them formally commented on it.