The NIAB site has outline planning permission for development and will be built on. I believe there is still an opportunity as detailed plans are developed in advance of a full planning application to make sure that what is built is what is needed and that development does not adversely affect existing residents particularly in terms of traffic and flooding.

The below image shows part of the site from a point of view above King’s Hedges Road, with Blackhall Road, Brownlow Road, Brierley Walk, Martingale Close and Cavesson Court in the foreground. 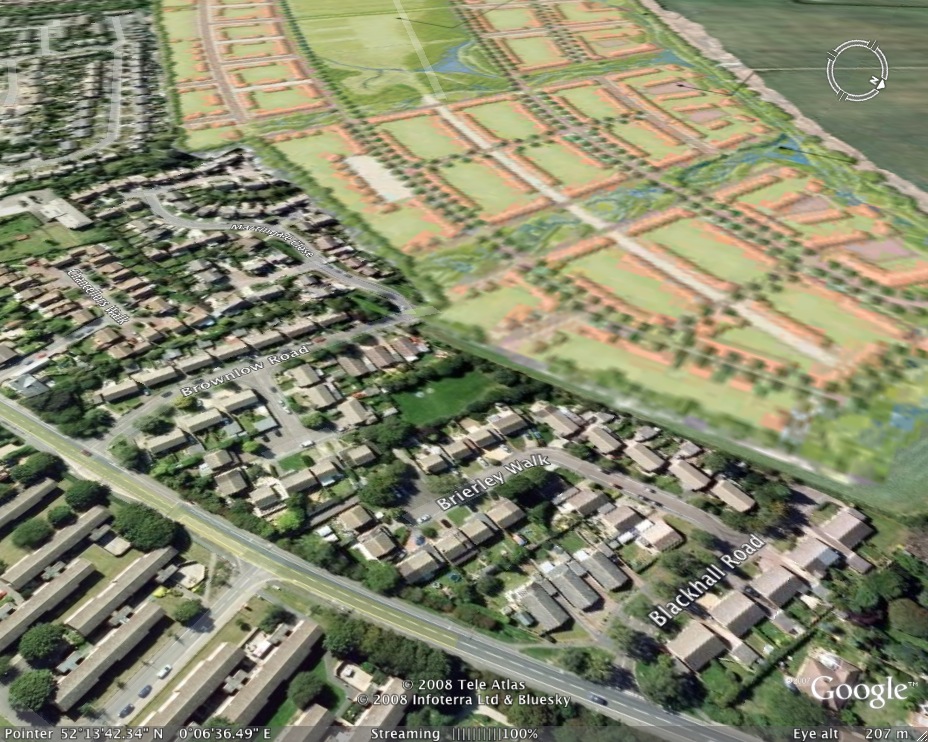 Buildings are to be up to four storeys high, with the taller buildings nearest existing homes, apparantly to preserve the appearance of the city from afar. I would give a higher priority to the overshadowing, overlooking and general intrusion on existing residents than the appearance of the city as you approach it. I would also question if four story blocks of flats are what are needed in this location, I would have thought it an area more suited primarily to family homes mixed with other properties as seen in the surrounding area, high density housing developments on the edge of the city do not in my view make good sense. Parts of the site are quite central therefore more suited to a higher density of housing than those at the Histon end of Histon Road.

There is to be vehicular, pedestrian and cycleway access road from Histon Road. What appears to me to still be up for debate is if there is to be a through road, and if not what proportion of the development is to be served from each of Histon Road and Huntington Road. The possible problem of conflict with the guided bus on Histon Road has been noted and given as a reason for Huntingdon Road becoming the primary access. (If the guided bus is expected to conflict with residents of the new development it must surely be expected to conflict with current users of Histon Road? – a situation which needs to be avoided)

If there is to be a path for through traffic on estate roads in the centre of the development steps will need to be taken to prevent the use of the road by though traffic from the Huntingdon Road/Girton area wishing to travel to the East of the City or East on the A14.

The outline planning statement is vague on the subject of through traffic stating: ” restrict through-access for general motor traffic where possible;”

An alternative would be for the main road on the development to be a non-estate, classified road, situated to the outer edge of the development. However while I think such a link road from Huntington Road to Histon road is needed I do not believe it would ideally be situated within the boundaries of the current site.

Upgrading the Girton Interchange to enable access from Huntingdon road onto the A14 Eastbound would reduce the need for traffic to cross the city closer to the city centre. I think there is room within the junction for the required slip road to be built. (Upgrades to the Madingley Road / M11 junction would have similar, greater benefits.)

It is worth noting here that the existing dead-end roads which appear to have been built with further development in mind at Woodlark Road, Windsor Road, Brownlow Road and Blackhall Road are to be used only for cycle and pedestrian access.

Then among the many more peripheral matters to consider: