The Greater Cambridge City Deal board appear to be intending to make some initial decisions on proposals to remodel Milton Road within the first two weeks of September 2016.

At a meeting of the City Deal board on the first of September the chair Cllr Herbert supported a proposal to appoint architects to develop new design options for Milton Road. Cllr Herbert did not immediately receive the support of his fellow voting board members at the meeting, but they agreed to discuss the matter and committed to issue a written response within two weeks. Cllr Herbert’s call for new plans comes despite him having approved spending hundreds of thousands of pounds to-date working up plans produced by consultants WSP | Parsons Brinckerhoff Engineering Services, and having repeatedly approved putting those plans out to consultation. (See the City Deal webpage for the Milton Road project)

The board also resolved to determine, within the two week period, its stance on a number of specific matters including:

The board appears to be responding to lobbying pressure including a petition, which had been referred to the board by Cambridgeshire County Council and a request from the City Deal Assembly.

Prior to the resolution at the City Deal Board meeting on the first of September the proposed schedule was for a further consultation in November and December 2016 followed by the development of a final plans and more consultation during 2017, and for no final decisions to be taken by the board until 2018. That timetable is likely to still largely be followed but the board now appear to be about to give early assurances and clearer direction in respect of the trees and verges on the road and to narrow the scope of the options to be considered. The board has though only resolved to discuss and respond, and its response could well be a surprise, and it could maintain its non-committal stance. 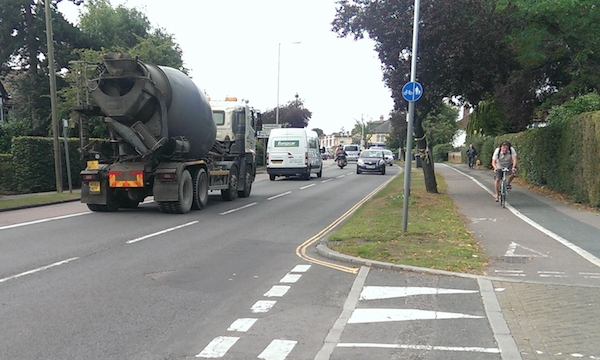 My view is board should meet in public to determine its position on Milton Road and formally agree their response to the petition, City Deal Assembly, Local Liaison Forum and County Council. There is no assurance that this will happen though, the deliberation and decision may well take place in private via email and the status of any response which emerges may well be unclear if it is not formally approved by the board. I think it would be disrespectful for the board to respond to, particularly the County Council’s full council resolution, via anything other than a formal resolution at a board meeting.

Board chair Cllr Herbert promised to send a copy of their response/decision to the County Council, the Local Liaison Forum and the City Deal Assembly but he didn’t set out any arrangements for publication direct to the public at large.

I would like to see a formal resolution of the board, in public, committing to:

I have published my full consultation response.

A public questioner at the City Deal Board on the first of September asked:

“May I please receive an assurance that the Greater Cambridge City Deal has the legal authority to spend any part of its funding on providing trees to replace those that it intends to remove from Milton Road or Histon Road?”

Officer Graham Hughes who was asked to respond said:

The simple answer to the question is yes.
The City Deal is delivering or will deliver the transport schemes under the powers delegated to it by the County Council and those powers allow us to do planting, tree planting, etc. within the highway which is where these schemes will sit so absolutely yes the City Deal does have the power bearing in mind that any tree planting would be part of, an integral part of, a transport scheme, so that gives you reassurance.

I thought that while the first sentence was clear, what followed was not obviously directly related to the question which was about funding, not powers, and I thought it raised the prospect of the City Deal board directing the County Council to spend non-City Deal funding on tree planting in relation to City Deal projects.

As a board obviously we are proposing schemes and we realise that some people don’t agree with some of the schemes and obviously we’re still out to consultation through the workshops that quality design including landscaping and trees is integral to any proposed schemes so we’ve had discussions with the department for transport on the overall principles and this is an integral part of the schemes that we would propose. If we go-ahead and actually implement them we would stick to high quality landscaping, we’ve got that as a discussion later on the agenda.

I followed up my previous quest for clarification on the City Deal’s statement decisions on trees will be delegated to a Cambridgeshire County Council officer.

A simple answer to that question, and the point that Cllr Bates made to the question raised by Ian Manning at the County Council is the situation in relation to the schemes being developed by the City Deal so essientially the officer referred to is me, I’m the executive director for economy and transport and environment at the County Council, so for County Council led schemes there are a whole series of delegations to me, that I can exercise however I would always exercise those in consultation with members as apprioriate and indeed I don’t have to exercise those delegations at all. What is different though in relation to the City Deal schemes is the City Deal has delegated to the City Deal Board the responsibility for delivering those schemes, so the answer Cllr Bates gave to the County Council, the question raised by Cllr Ian Manning, is correct, which is that issues about the location and number of trees, landscaping etc. will be made by this board, and not by me, so this board will make the final decision on the schemes, for, for example, Milton and Histon road schemes and that will include the landscaping proposals.

As far as I am aware the answer from Cllr Bates referred to has not been published anywhere and Cllr Bates himself while present at the board meeting didn’t offer any illumination.

So the board will take responsibility.

I asked the Summary of infrastructure decision making document to be corrected following the response indicating it is inaccurate. I also suggested it be formally brought to a board meeting for approval (or not).

The board meeting on the first of September was told that the Milton Road Local Liaison forum is planning to hold its first workshop sessions in “mid-September”, a schedule which means the events could either precede, or follow, the board decision.

The board were not able to provide any further information on the arrangements for the Milton Road workshops which the forum agreed to determine in private via deliberations following their formal public meeting on the 9th of August. The board also could not share any future dates for Local Liaison Forum meetings (the forum failed to set a future meeting date at the 9 August meeting).

I asked where I should look for information on the upcoming events, including on the arrangements for signing up for the public places at the workshops. Board chair Cllr Herbert said:

We will make sure they are so publicly available that you won’t need to dredge to find them, the dates.

Cambridge’s North Area Committee meets on the 15th of September 2016 so that might be an opportunity to ask councillors for an update if details are still unpublished.

While not officially published online by the City Deal assembly, board, or the Local Liaison Forum the following resolutions have now been debated by all those bodies. They state:

The Milton Road LLF does not support any proposal that there be two bus lanes on any part of Milton Road and in particular the stretch of Milton Road from Oaktree Avenue to Hurst Park Avenue.

The Milton Road LLF calls upon the City Deal Board to

Landscaping, public realm, trees and verges must be an equally important part of the design work, consultation and processes in relation to the City Deal projects and in particular for Milton Road. [Subtext: equally with engineering and any other aspect of the programme.]

Milton Road LLF calls upon the City Deal Board to:

The Greater Cambridge City Deal board on the 1st of September discussed their response to the Local Liaison Forum resolutions, the recommendation from the Assembly, and the petition.

City Deal board chair Cllr Lewis Herbert proposed supporting the resolutions, except part b) of each of them. Cllr Herbert wanted to appoint architects to develop new design options for Milton Road and to rule-out bus lanes on both sides of the road between Hurst Park Avenue and Oak Tree Avenue (this is a short stretch of about 60 metres from between the pharmacy and the roundabout).

Cllr Herbert suggested a deadline of two to three weeks for the board to issue a combined response to the petition, Assembly and Local Liaison Forum.

Cllr Herbert promised to set out a commitment from the board in writing on the subject of trees and verges.

Voting board member Cllr Burkitt stated he had not seen the Milton Road local liaison forum resolutions before the meeting. (Despite the City Deal Assembly deciding to support the resolutions I don’t think they have, even yet, been formally published anywhere).


“to provide a written response within two weeks confirming the Board’s position with regard to the content of the petition itself, the Milton Road Local Liaison Forum resolutions and the request by the Joint Assembly.”

The City Deal Assembly supported the resolutions and requested:

that the Greater Cambridge City Deal Executive Board made[sic] a commitment to having an aspiration for an avenue of mature flowering trees in green verges on each side of Milton Road, consistent with bus reliability and high-quality cycling infrastructure provision.

Source: Tweet with photograph taken of papers provided to those attending the meeting.

Resolution two was amended at the Local Liaison Forum to add the subtext which I’ve presented in square brackets above.

A number of public speakers called for residents’ parking zones to be introduced in North Cambridge, apparently seeking to reduce traffic generated by people driving into the area to park.

I think residents’ parking zones should be a last resort and used only where there is very, very significant problem with people being routinely unable to park on roads near their homes due to the presence of vehicles parked by those who it would be in the public interest to see parking elsewhere. Where restrictions are brought in they should be for the minimum period necessary to achieve the aims and some unregulated, and pay and display, spaces should be provided too.

I strongly oppose bringing residents’ parking schemes to the residential areas of King’s Hedges, with the exception of streets in the immediate vicinity of the new station where, if there is overwhelming, justified, demand from local residents they should be considered. Given the probability of a problem emerging in that area I think plans should be put in place ready to execute very rapidly if required.