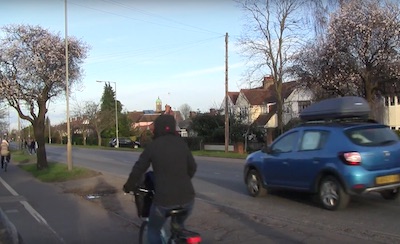 Milton Road in North Cambridge, where £23m of City Deal money has been allocated.

Exactly what this delegation means in practice is currently being discussed. I have submitted the following public question to the Greater Cambridge City Deal board’s meeting on the 3rd of March 2016 in the hope of prompting greater clarity:

The councils in the Greater Cambridge City Deal area have agreed to delegate powers to the board to the extent the board requires them to pursue its objectives.

Cambridgeshire County Council are currently in the process of clarifying which powers it considers have been delegated to the board.

Does the board expect similar clarity over which powers Cambridge City Council and South Cambridgeshire District Council consider to have delegated?

I suggest the board itsself makes clear which powers it considers it holds, and which powers it intends to exercise in relation to particular schemes and circumstances. This is important so that those interested can understand and follow the decision making process and focus campaigning and lobbying appropriately.

I’m interested in if the board consider powers relating to decisions on tree works, including felling, have been delegated to it.

Specifically, for example, I’d like to know if the board will be consulting and taking decisions on tree works and felling relating to the Milton Road proposals or if decisions relating to the trees will be made following the current practices involving the local councils.

The Greater Cambridge City Deal Board’s terms of reference, which have been approved by each council, state:

Cambridgeshire County Council is currently considering clarifying what powers have been delegated in what circumstances and have identified the following specific powers as delegated in relation to City Deal Infrastructure schemes:

The County Council are proposing clarifying which schemes this delegation will apply to, stating:

A City Deal infrastructure scheme is one arising from the Greater Cambridge City Deal which has all of the following characteristics:-

I would rather have one council for Greater Cambridge, giving us democracy in depth, rather than concentrating all local government powers in three individuals.