I observed the Annual General Meeting of the Jesus Green Association on the 3rd of December 2013 where detailed plans for a new path under the plane tree avenue on Jesus Green were revealed. 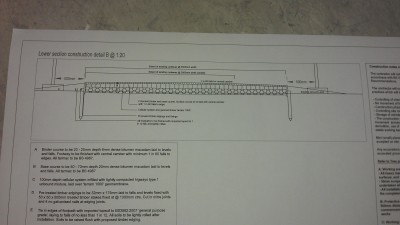 The detailed plans were not presented to the last West/Central Area committee, nor are they linked from a webpage on a current consultation on the proposals being run by Cambridge City Council.

The existing path is to be removed completely before a replacement is installed along the same line. The current 2.6m wide path is to be replaced by one 3.6m wide; with the extra space being taken on the opposite side to the existing lampposts.

Great care is to be taken to avoid damage to the tree roots. Other than stakes for wooden edging for the path there is to be no excavation. The new path is to built up using a plastic cellular honeycomb structure which will be filled with a “highways type 1 unbound mixture” ie. (I think) gravel. The surface will be tarmac.

The soil on either side is to be laid flush with the path edges.

The planned work is part of a series of cycleway improvements across the city. 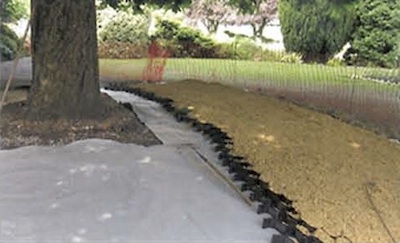 My view is improvements are badly needed; the path is in a very poor state. When councillors have previously decided to prioritise fixing other paths on Jesus Green I have commented, in a related article : Councillors Make Odd Choice of Path to Fix on Jesus Green.

At the December 2013 Jesus Green Association meeting a number of those present raised concerns about cyclists. One concern was that improvements to the path would result in cyclists going faster, this worried those making the point as they thought faster cyclists would make the path less safe for pedestrians.

A number of those present proposed painting a line down the path to separate cyclists and pedestrians. I suggested this may increase conflict as cyclists may start complaining about those walking on “their” path and vice-versa. I’ve personally been shouted at for stepping into an area which was apparently once marked for bikes on Midsummer Common on the approach to the crossing to Fair Street and related this experience to the meeting. Others present said they had had similar experiences; including as the party doing the shouting! Despite this the association’s AGM appeared though to resolve to put the suggestion of segregation to the council; urging it be done as the path is replaced and for consideration to be given to ways to mark the separation in a less ugly manner than a bright white line.

It was noted that 3.6m is not very much width to fit a pedestrian area and a cycle lane in each direction into.

According to the consultation documents works will require central government approval, as well as planning permission and the path will be closed for a period of five weeks as the works, which are programmed for Spring 2014, take place.

A “specialist arboricultural company” will no doubt be very happy to learn the council wishes to pay it to blow some air into the ground as part of the works “to fracture the soil beneath the ground around the roots, allowing more air and nutrient to the roots, as well as alleviating compaction”.

Decisions in relation to Jesus Green appear to be taken at secret, private meetings called either “stakeholder meetings” or “Jesus Green Working Group” meetings. I do not know if these are one and the same. I have argued, and will continue to argue, for debate about Cambridge’s key green spaces to take place in public and for decisions to be taken democratically by elected councillors.

There is no indication accompanying the council consultation of which, if any, councillor or council committee the consultation results will be fed into.

Ex Cllr Sarah Whitebread who sought, but failed to obtain, improvements on the path as a councillor, and who I believe is currently working for the local Liberal Democrats is one of those who would it appears like to see the detailed plans, but even from her well-connected position she apparently can’t access them due to the closed nature of the way the Liberal Democrat run council operates:

Further Points from the Meeting

Councillors should report changes proposed to Jesus Green to the West/Central Area Committee and that committee, rather than meetings of the Jesus Green Association, or the associated secret working group and stakeholder meetings ought become the main forum for discussion, and decision, relating to the space. (Clearly some decisions, due to their size, have to be made elsewhere in the council’s structure, but there ought be input from, and reporting to, the area committee).

I don’t think councillors ought give significant weight to the views of the Jesus Green Association given its current position.