In an effort to get a clearer picture of what MPs are doing in Parliament I have created an interactive table showing votes where parties have abstained and votes which have split parties. (Image:MONET)

I’ve created an interactive table showing all House of Commons votes since the last general election. Using this it is possible to sort the votes in a wide variety of ways. Instances where it appears that a party is abstaining from a vote, and where a party is split on an issue, have been highlighted. The data is derived from Public Whip and is automatically kept up to date.

Despite Parliament itself and other publicly funded bodies like the BBC having large staffs and budgets to communicate what our elected representatives do on our behalf in the House of Commons I could not find answers to questions such as the following anywhere on the internet (answers can now be viewed via the links to my table of votes):

In over half of the votes more than 99% of MPs voted along party lines so split parties have been rare. In only 7.7% of votes less than 80% of a party’s voting MPs voted in line with the majority of that party.

The votes where parties were split were only on a small number of subjects:

In addition The Labour Party was split on questions relating to replacing the Trident nuclear deterrent. [1][2].

Table Showing Frequency Of Parties Being Split in a Vote

There were five votes where all main parties were split; three on MPs salaries and two on the Human Fertilisation and Embryology Bill.

A party is marked as “split” if less than 80% of those MPs from that party who vote do so in line with the majority of that party.

At the time of writing in 85% of votes the party with the lowest unanimity has more than 80% of its MPs voting in line with the majority of that party.

This strategy can be justified by the below graph showing the frequency of each percentage turnout in the votes in the House of Commons between May 2005 and October 2009: 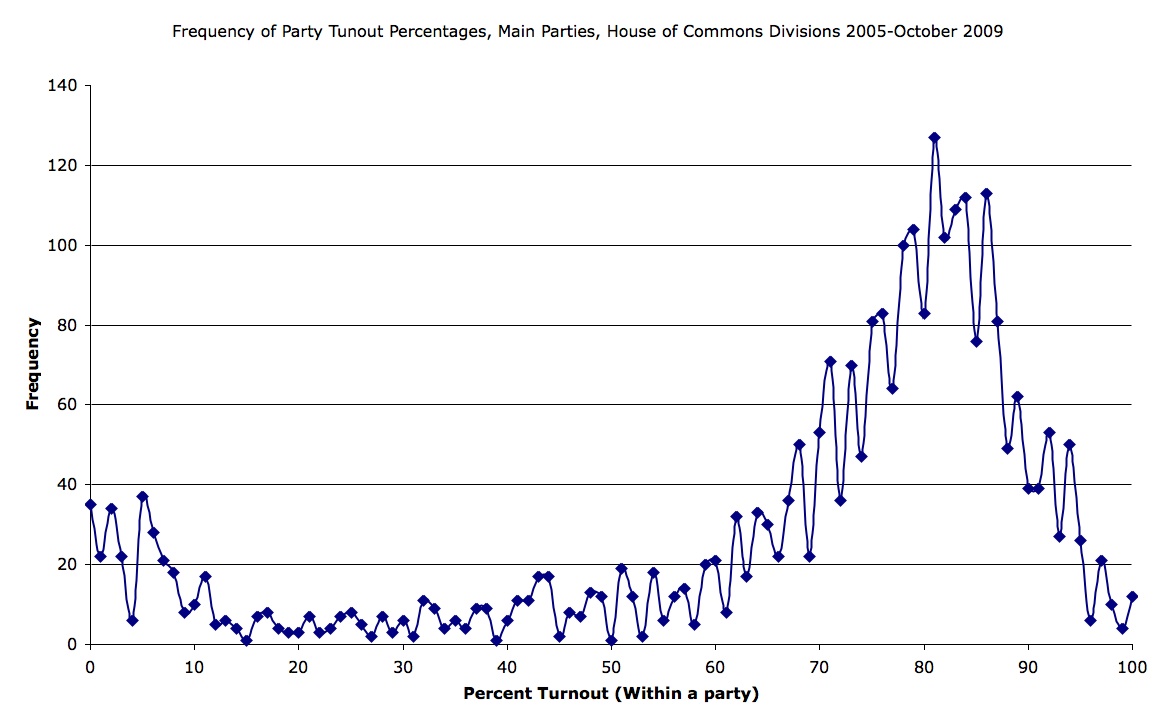 Abstentions can be seen as the increase in frequency below about 10%. Selecting all votes where less than 10% of one party votes catches those votes which are generally very poorly attended.  I have only flagged a vote as one where a party is abstaining where at least one main party has a turnout placing it in the normal distribution centring on 80%.

Reasons for abstaining can include not thinking the decision ought be made at that point in time. This appears to be the reason the Conservatives abstained in a  vote on the 3rd of November 2009 on who ought appoint senior civil servants in the Scottish Executive.  The Conservatives supported the proposal to remove the power from UK ministers, but wanted the recommendations of the Commission on Scottish Devolution chaired by Kenneth Calman to be looked at as a whole.

The Conservatives abstained in another vote held on the 3rd of November 2009, this second vote was on the question of if staff at GCHQ should come under the jurisdiction of the Civil Service Commission, a move which if accepted would have ensured employment related safeguards applied to GCHQ staff and would have required appointments to the agency to be made on merit (rather than on say political grounds).  Conservative MP Oliver Heald spoke in favour of the amendment to ensure statutory protections applied to GCHQ staff, he said: “I believe that there is no real reason why the amendment should not succeed”, but when it came to the vote he, and his fellow Conservatives abstained. Highlighting these cases enables MPs to be asked to explain their actions. Reasons for abstentions are rarely given during debate. If Mr Heald replies to an email I’ve written to him asking why he didn’t vote in-line with what he said I’ll post an update in the comments.

A proper means for MPs to record abstentions would I think be useful. It probably doesn’t need any formal change in procedures. If MPs wishing to abstain and make it known they’d abstained simply said what they were intending to do at the end of the debate, and insisted it was recorded in Hansard a new procedure would emerge. (Voting “Both”, isn’t quite the same as an abstention, as it might be taken to imply support for both options in instances where that makes sense). In the Scottish Parliament it is already possible to formally abstain (they have a button for it on their desk).

3 comments/updates on “Looking at How MPs Vote”