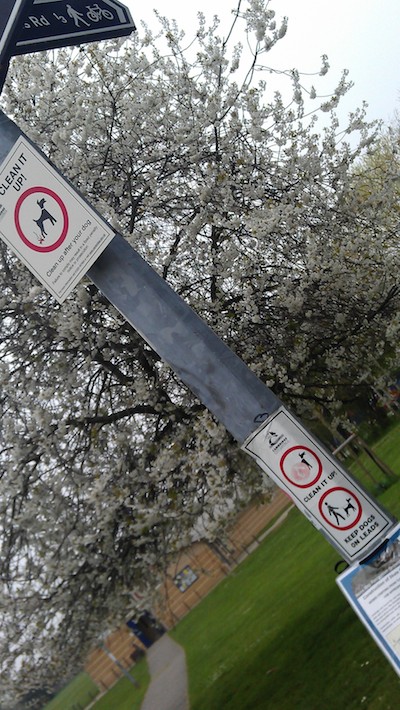 At Cambridge City Council’s full council meeting on the 3rd of April 2014 the executive councillor for bins and dog poo, Cllr Swanson, revealed the existence of a secret experiment she has been running. The experiment, which she had not told any of her fellow councillors about, and the existence of which had been kept from officers who did not have a need to know, was aimed at displacing dog poo.

Cllr Swanson told the meeting that the council had monitored the levels of dog poo in specific areas around the city for a period before installing “we are watching you” signs, which included a pair eyes which “become visible in the night”. Cllr Swanson reported that the signs had been effective in four of the eight trial areas and the degree of effectiveness ranged from 4-78%.

It was a Keep Britain Tidy research project and therefore a report will go into Keep Britain Tidy and we will probably pool, it was a national project, not every authority took part but they will pull together reports and make some future recommendations. Certainly we will consider using the eyes again, yes, some of them are staying in place, and they may crop up in other parts of the city.

At a meeting in King’s Hedges held the day before residents had expressed concern about the tone of the “we are watching you” posters, and about their unprofessional, laminated sheet of paper, appearance. The councillors, police representatives, and council officers present all had no idea of the secret experiment Cllr Swanson was running. Those asking about the signs did not appear to have noticed they contained eyes, which as Cllr Swanson put it “became visible at night”. It wasn’t made clear how the eyes glow in the dark and become visible in the night, it wasn’t mentioned if they are radioactive, battery operated, or are simply printed posters placed under streetlights.

I have explored my local area looking for the signs with glow in the dark eyes on them, but have not been able to find any.

I wonder if Cllr Swanson has required a RIPA authorisation in order to carry out surveillance on dog owners or if the results of her experiment have been based only on assessments of dog poo left on the ground.

The council has a policy of not posting notices claiming an area is covered by CCTV when it is not. It will be interesting to find out if the posters complied with that policy.

After talking about the “eyes” posters Cllr Swanson offered councillors something else to amuse them. She reported that in York signs on dog fouling are placed at dog’s eye height. Cllr Swanson informed councillors that while dogs can’t read signs it turns out dog owners spend a lot of time bending or kneeling down so that is a good height at which to position messages aimed at them too. 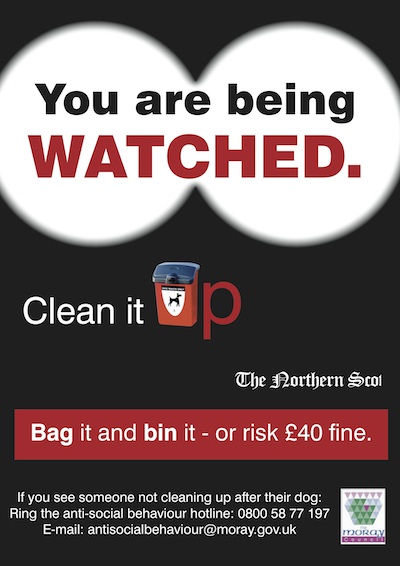 You are being watched dog fouling poster with eyes motif from a campaign run by the Northern Scot newspaper.

Cllr Swanson didn’t say if she would be moving any of the city’s no dog fouling signs to lower levels.

As the revelations were made in response to an oral question from one of Cllr Swanson’s Liberal Democrat party colleagues, Labour’s spokesperson on dog poo, who I am informed is currently Cllr Peter J Roberts did not get a chance to respond to the revelations at the meeting. I will invite him, and anyone else who wishes to comment, to do so here.