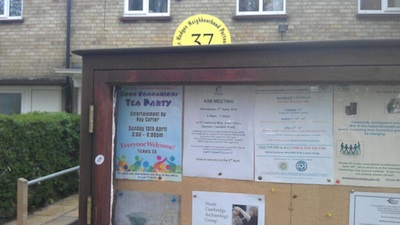 On the evening of the 2nd of April 2014 I attended an “Anti-Social Behaviour” meeting in my ward of King’s Hedges in Cambridge. I’d found out about the meeting from a Cambridge City Council council tweet which pointed to a webpage on the event.

The event in North Cambridge follows one in the East of the city to which no-one turned up. Similar events have been held years ago, but this these were the first I’ve heard of recently.

The council had managed to publish two different start times (17.30 and 18.30) on their single webpage for the event; that combined with no-one attending the similar event in the East and the lack of any other obvious publicity meant I was expecting something similar in the North.

When I arrived at the 37 Lawrence Way Community House in Kings Hedges, the meeting’s venue, I found a notice board outside advertising the meeting. The door was closed and there was a scrappy “office closed” sign in the window. I tried the door, and opened it into a rather dilapidated and uncared for building. A sign pointed to a meeting room upstairs so I followed that.

I entered the room to find King’s Hedge’s Labour Councillor Kevin Price holding fort at the head of an oval of seats. A Cambridge City Council officer, Louise Warbank, sitting to his left started the meeting, introducing herself as an “anti-social behaviour officer” and saying she would be chairing the meeting.

Those present were asked to introduce themselves. One member of the public introduced herself as a “snooper”, someone called Tom said he was a police officer, though later suggestions were made by others that he was a PCSO, and no clarity was given. He was off duty and out of uniform. The manager of the King’s Hedges Tesco on Campkin Road introduced himself as “Ruben”, he was in his Tesco uniform suit. There were three or four other members of the public, and a Cambridge City Council Housing Officer. Cambridgeshire’s Police and Crime Commissioner Graham Bright was neither present himself, nor was he represented. 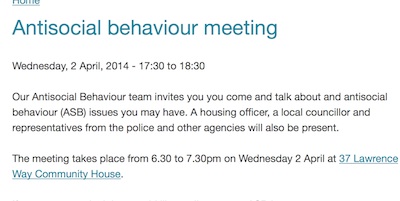 Cllr Price kicked things off by saying dog fouling remains the number one anti-social behaviour issue in King’s Hedges. He said there was nothing else to report and no-one had been in touch with him about any other matters.

Next a member of the public, Ali, reported an almost incredible litany of crime, starting by saying a foreign man had entered her flat and urinated on the floor. She said there were lots of foreigners (apologising for using the term which she said could get her into trouble, but explaining she was just sharing her experience) drinking in the pubs of Kings Hedges, and drinking alcoholic drinks they’ve bought from Tesco who then urinate around the area. Ali said she had reported the event to the police, and had later identified the man in Tesco, she suggested Tesco staff had deterred her from directly confronting him in the store, but said she expected the police to be obtaining CCTV from Tesco to use to identify him. The police officer and Tesco manager refused to comment specifically when asked if the police had acted to obtain the CCTV, though the Tesco manager did say the police are “constantly” in the store obtaining CCTV.

The same individual also reported her experiences with a dangerous dog on Jackson Rd, saying the dog had picked up her cat in its mouth and had also tried to bite her. She also said she had had £5,000 of fishing equipment stolen from a garage.

The man who described himself as a Police Officer, Tom, then said he was on his own in Kings Hedges. Members of the public questioned why this was, and if it was likely to change, and got no substantive response.

A member of the public noted Police and Crime Commissioner Graham Bright had spoken at the recent North Area Committee about his successes in recruiting more special constables, and asked how they were being used in the area. Police Officer Tom reported there was no use of Special Constables in the area, and he’d not come into contact with them.

I spoke to ask what the purpose of the meeting was, and what kinds of things it would be appropriate to raise. I said I was particularly concerned about crimes which result in injury and harm, and I would like better information on such crimes, including violent crime on the streets of the area. I asked if any of those present knew how to access the crimes which had occurred in the area last night as Police and Crime Commissioner Bright had told the North Area Committee was now possible. The council’s specialist “anti-social behaviour” officer, the local councillor and the person describing himself as the police officer didn’t know, and neither did anyone else. I suggested that perhaps the Police and Crime Commissioner had not been accurate when speaking at the North Area Committee.

I asked why council officers were promoting the anti-social behaviour meeting, but not the North Area Committee, where local police priorities are democratically set. Officer Warbank stated the anti-social behaviour meeting was her idea and she’d self-initiated it and she had no responsibility for the North Area Committee meeting.

A resident said he’d come to talk about littering. He blamed “wretched students” for the littering in the area, there was some disagreement from others present. He also stated that people might be motivated to drop litter in King’s Hedges given the royal connection in the ward’s name and littering could be an anti-monarchy protest. Cllr Price responded to say he didn’t think that was in fact behind the littering.

There was some discussion of “no littering” and “keep dogs on leads” signs; with some suggesting putting them up and others noting they get ripped down. The meeting was told the council has put up unprofessional A4 laminated paper signs relating to dog fouling but the two officers present said that was something other officers had done and they were unaware of it.

There was a suggestion that Cambridge Regional College students buying lunch from Tesco and eating it on green spaces in the area were responsible for lots of littering. The manager of Tesco said lots of students did buy their lunch from his store, as food offered on the college site was too expensive. The manager said he expected this behaviour to change when a new shop planned for Orchard Park opens.

It was suggested, by Cllr Price, the police may be reluctant to deal with college students littering as a non-payment of a fine could lead to a serious criminal record.

Also on rubbish, people said there was still fly-tipping at the recycling centers, but the council responded quickly to reports and cleared them up.

The housing officer said she was only pursuing one anti-social behaviour case through the courts at the moment, in relation to the area, which was low.

One member of the public present said King’s Hedges is a place where there is a general lack of respect for the law.