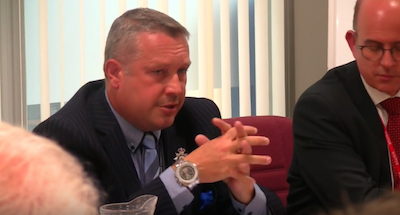 I have submitted the following for the Public Questions / Statements agenda item of the Cambridgeshire Police and Crime Panel meeting on the 9th of November 2016:

I would like to suggest the panel looks into the arrangements surrounding police misconduct hearings.

The notice for the misconduct hearing which started on the 31st of October 2016 contained no information about how to apply to attend the hearing, or “details of exclusions of attendance condition”s. The force’s published information* states that such information will be included on all notices. Without such information being included on the notice I cannot see how the hearing can have been considered to have been held in public. I publicly raised my concerns** about the omission from the notice with the police force and Police and Crime Commissioner in good time for it to be corrected but I received no response and no action was taken.

Many of the notices of hearings published to-date have not detailed the conduct that was the subject matter of the case. Allegations have been described in vague terms for example merely: “breached professional standards“*** without any further details given.

Cambridgeshire police have adopted a practice of removing notices of hearings from their website shortly after they have been published.

Notices of hearings are published on a page deep on the force website and are not routinely included in the force “news” listings, or publicised on social media.

The published material does not give me confidence that notices of hearings relating to officers from other forces routinely working in Cambridgeshire as part of collaboration arrangements would be publicised in Cambridgeshire.

The misconduct hearing outcomes reports are vague, anonomised, and appear inconsistent with the statistics published on the College of Policing’s “Disapproved Register”. ****

The force, under the Police and Crime Commissioner, appear to have adopted a policy of minimal openness and transparency. The restrictions on public access and reporting at hearings appear massively excessive.

Names of hearing chairs are not publicised, and are not included on notices of hearings, this means people can’t identify which chairs are failing to run accessible, public hearings, and can’t lobby the Police and Crime Commissioner to remove them from the Commissioners’ list of nominated chairs.

I am disappointed that the public hearing process is not yet being extended to cover those police complaints which it would be appropriate to deal with via such a process.

I think public hearings, if embraced, have the potential to improve confidence in policing. Current practice in Cambridgeshire in my opinion makes the police look secretive and unwilling to operate a policy which is in line with the spirit of the law.