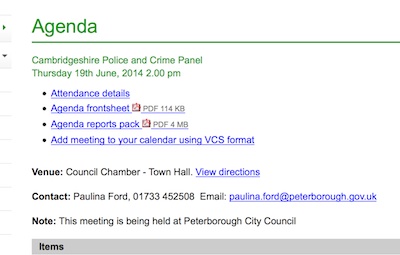 Cambridgeshire’s Police and Crime Panel is due to meet, in Peterborough City Council’s council chamber, at 2pm on Thursday the 19th of June.

These are some of my notes and comments in advance of the meeting, following the published agenda.

The meeting date, and location, has changed since that agreed by the panel at its last meeting. As far as I can see nothing was done to draw attention to the change, and it raises the question of how the change was agreed between meetings. No explanation for the change is given in the papers for the rescheduled meeting.

It is not clear to me who is to represent Cambridge City Council (and thereby Cambridge residents) at the meeting. Cllr Tim Bick is shown on the Panel’s website as being expected to attend; though he has tweeted to say he is no longer a member of the panel. I’ve not seen any announcement from Cambridge City Council to show a new member has been appointed. I think its important that the membership of the Police and Crime Panel is well publicised so everyone can have input into the process of holding the Police and Crime Commissioner to account by lobbying representatives prior to meetings of the panel.

A major omission from the agenda is any report back from private meetings of a sub-committee of the panel, comprising the chair, vice chair, three members and someone from the Centre of Public Scrutiny which was set up at the previous meeting, in March 2014. The role of the sub-committee was “to formalise a scrutiny plan for the forthcoming year”. Cllr Tim Bick, a member of the committee which the action list update from the June 2014 panel meeting papers states met, in secret, on the 15th of May 2014. tweeted to say: “there will at last be some focused scrutiny sessions recommended at next meeting”; however there is no report from the secret meetings included in the papers. The lack of a report from the sub-committee is a breach of section 9.7 of the panel’s rules of procedure. It would be farcical if the panel has rules relating to sub-committees which it evades by calling its sub-committees “working groups” though it appears this may be happening.

At the 2013 Annual Meeting the panel appointed Cllr Mac McGuire as its chairman. He made one promise on his appointment – to ensure the panel moved its meetings around the force area. This has not happened, with all but two (including the June 2014 meeting) meetings of the panel since its inception being held in Huntingdon.

The action point on the establishment of the sub-committee to formulate a scrutiny work plan fails to note the resolution to invite someone from the Centre of Public Scrutiny.

The panel did not only ask the chair to write to the independent member Raja Ali who has been absent for over a year; but to all those members with poor attendance; the acting chairman’s summary was: “We’ll, ask the chairman to write to any individual who has not attended”.

I am surprised there is no report on this item. When investigative reporting by the Cambridge-News tracked down the absent member Raja Ali (whose contact details are not published by the panel) Mr Ali reportedly told the Cambridge News: ” “I am unable to attend as my work as a driving instructor doesn’t allow me to travel to Cambridge for a whole afternoon.

“I know I can offer to the panel quite a lot but my work patterns are such that it makes it difficult. I have requested for evening meetings and I hope they happen and I would love to attend. We have £1,000 for travel expenses but I never used it as the meetings I attended I got a lift from a colleague.”

The quote is baffling as the panel have never met in Cambridge. I would like to know if it is true that Mr Ali had requested evening meetings, and if so why this request wasn’t put to the panel.

I would have expected the panel to have a report including a recommendation for resolving to dismiss appointing a replacement independent member.

It was clear at the previous meeting that members were not familiar with section 3.25 of the The Panel Arrangements which make clear the Panel may decide to terminate the appointment of a co-opted Member of
the Panel, if two thirds of them agree to do so, on one of four grounds listed, one of which is: “if the co-opted Member has been absent from the Panel for more than three months without the consent of the Panel”.

I would have expected a report to confirm to members that this provision applies to Mr Ali.

I think the panel ought make clear how they are interpreting the “balanced appointment objective” when they advertise the position.

I have submitted the following questions:

1. To: Police and Crime Panel member Christine Graham, or in her
absence, rephrased and addressed to the acting chair of the panel:

Which of the Commissioner’s decisions on the agenda for the panel’s
March 2014 meeting did you intend to declare an interest in, and leave
the room for the consideration of, and why did you not declare the
interest and leave the room as you indicated you would?

At the March 2014 meeting of the Police and Crime Panel member
Christine Graham stated:

Background:
“Mr chair I have to declare an interest in one of the decisions and
I’ll have to leave when that one is discussed.”

Christine Graham did not declare any interest, and didn’t leave the
room as she stated she would.

I have made a video and transcript of the meeting available at:

2. To: The chair, or acting chair, of the Police and Crime Panel:

Why are the Police and Crime Commissioner’s replies to the Police and
Crime Panel’s requests for written responses to matters raised during
panel meetings not routinely published by the panel and considered by
subsequent panel meetings?

Member of the public Paul Lythgoe published questions he says he has submitted to the meeting. I hope his questions will prompt an apology to him, to me, and the panel, from officers who wrongly advised that no questions from the public had been rejected.

I have made a FOI request for some of the Police and Crime Commissioners’ written responses following the February 2014 meeting. None of the questions I had raised are substantively addressed by the response. Where I had questioned the accuracy of the commissioner’s statements to the panel commissioner has not addressed the points raised but stated:

these were verbal responses given by the Commissioner and need to be considered in the context that they were made.

My interpretation of this is the Commissioner is telling the panel they can’t believe a word he says to them during their oral questioning at panel meetings. This shows the importance of written exchanges. Perhaps the panel ought make a concession to the commissioner in light of his response and request written responses to more of the panel’s questions, and as I suggest ensure those responses are published, and considered by, the next meeting of the panel.

The report states: “Although the Commissioner’s Office referred one item of correspondence to the Panel for consideration, the Panel determined that the issues raised did not constitute a
complaint against the Commissioner and no further action was taken”

The panel don’t appear to have considered this complaint at a public meeting; and I’ve not seen any published explanation for the panel dismissing it as “not a complaint”.

I think there’s a failure of transparency here.

In response to my FOI request for written responses to the panel the panel were told: ” On a very few occasions, complaints are made about the Commissioner himself. To date, none of these have been complaints that fall within the remit of the Police and Crime Panel and on each occasion have been forwarded to the Independent Police Complaints Commission (IPCC) in accordance with the legislation. On every occasion the IPCC have taken the view that no criminal offence has taken place; there being no ancillary issues these complaints are not then forwarded to the panel as the panel have no remit to deal with them”.
I think the panel should be given more information, on the number of complaints and the nature of them.

I have commented separately on: Lack of Transparency from IPCC On Police and Crime Commissioner Complaints.

I have previously made suggestions on the operation of the public contribution slot at the meetings.

Sub-committees should meet in public; with their meeting dates published on the panel’s website. The provisions applying to sub-committees ought apply to working groups so the panel cannot evade transparency requirements by giving sub-committees other names.

A loophole allowing questions from the public to be rejected by officers, without reporting the fact they have been submitted to the panel, ought be closed. The rules of procedure currently only require the fact a question has been rejected to be notified to the chairman and made public via the meeting minutes in selected, limited, circumstances. Section 7.10 of the rules contains an erroneous internal reference this would be an opportunity to fix.

The Police and Crime Commissioner reports he is publishing his outreach worker’s diary at:

The diary is historic; it does not show the future events which the outreach worker is to attend. I thought it was clear when the Police and Crime Panel requested the proactive publication of the diary that their aim was to inform people in advance where the commissioner’s outreach worker would be.

The commissioner is not publishing many upcoming public events that either he, or his outreach worker on his behalf, are attending. I hope this is a point the Police and Crime panel again challenge the commissioner on. The commissioner has an “events” section of his website but many of his appearances at, for example, local council meetings have been omitted from it. Purporting to have information on the website, but what’s there being inaccurate and incomplete is as bad as it not being there at all.

The commissioner’s report doesn’t deal with the question of the levels of spending on his office. I suspect he has omitted that to avoid embarrassment and negative press coverage. There is a lack of detail in all areas which have been touched on, and little substantive on which to comment. The commissioner’s throwing in of the latest performance update from the police appears arbitrary; it’s notable information on how badly targets for call handling are being missed (when they are missed) are still not being provided.

This report is largely, if not entirely, duplication of content from the annual report.

12. Decisions by the Commissioner

I don’t think there’s anything particularly notable here. The commissioner is still selecting those decisions which he puts to the panel himself so it’s not surprising that he doesn’t volunteer information on controversial decisions he has taken.

The commissioner is supplying information to the panel via scanned documents which he has signed. I would rather not have the signature but have the text of the documents available in an easy to manipulate, read, and re-use form.

It is notable that no substantive scrutiny on items proposed by the panel is included in the plans for future business.

I would like to see the panel deciding for themselves which areas (eg. call answering performance, ECINS, Alert, the Commissioner’s structures inc. the Business Co-ordination Board) to look into. I’ve submitted my detailed suggestions to the panel.

One comment/update on “Cambridgeshire Police and Crime Panel – June 2014”