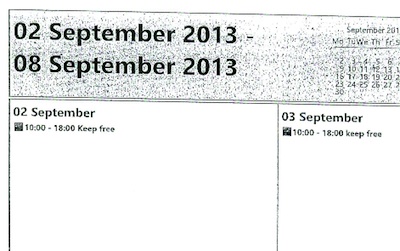 The released material appears to show Graham Bright is asking his staff not to schedule events during two weekdays each week.

While it appears the diary isn’t comprehensive presumably the days marked “keep free” or similar do indicate the days the Police and Crime Commissioner Graham Bright takes off.

The Commissioner has released his diary as scanned images of a computer print-out. This is far from as useful as pro-actively publishing his upcoming diary on his website would be.

Many of the entries are hard to read as the text is on a shaded background.