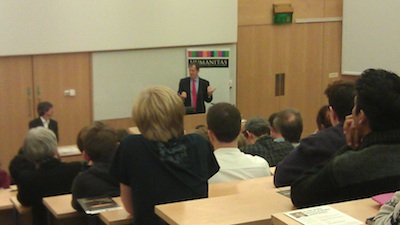 The Labour Party’s Prospective candidate to become Cambridge’s MP at the 2015 general election, Daniel Zeichner, has sought advice on how to be popular from ex Labour spinner Alastair Campbell.

Mr Campbell’s advice to Zeichner was:

Don’t calculate too much. Go with your gut.

This appeared to me to be a direct challenge to the rational and evidence based approach taken by Cambridge’s current MP Julian Huppert.

Mr Zeichner didn’t immediately reveal if he would be taking Mr Campbell’s advice and if he will be positioning himself as the “go with your gut” candidate at the next general election, offering the Cambridge electorate a clear and distinct choice between a rational, scientific approach, and relying on instinct.

Alastair Campbell was in Cambridge giving a talk and selling signed copies of his books on the evening of Wednesday the 13th of November.

Following the talk (the text of which (not quite as delivered) is now available) Zeichner was the first to jump up with a question.

On introducing himself as the local Labour party candidate Campbell revealed he’d never heard of him and didn’t know he was the candidate. This was interesting given the way Zeichner seeks to give the impression he is a senior and influential figure in the national Labour party.

Zeichner then launched into his rather bizarre question; asking Campbell why he thought he had become a popular figure himself, he asked:

Why are you so successful? What do you put your popularity down to?

It looked as if Zeichner was asking for advice on raising his own popularity (and presumably some tips from the master on getting himself elected as Cambridge’s next MP).

Mr Zeichner made his appearance flanked by a row of local Labour Party figures.

Uniformed Cambridge University security officers appeared at the end of the talk and question session and escorted Campbell away in a secure bubble to his book selling / signing venue. Clearly someone has concerns that Cambpell’s popularity is not as universal as Zeichner’s question suggested.

If Mr Zeichner buys a book from Mr Campbell and gets the opportunity to have a chat to him while he signs his copy I wonder if Mr Campbell will advise him that asking for advice on how to be more popular might not be a great way to kick off an election campaign?