On the 18th of August 2014 I watched Cambridge City Councillors unanimously deny planning permission for an extension on the grounds it would be too big. The councillors making the decision appeared unaware that the applicant had already been given permission by the council for an even bigger extension and that he was actually seeking permission to build a smaller alternative.

By rejecting the application for the smaller extension on the grounds it was too big councillors left the applicant with the option of either appealing against the decision, or building the larger extension he already had permission for.

After the decision was made the applicant, unprecedentedly, addressed councillors telling them that their actions were bizarre and ill-informed and that their decision to reject his proposal for a smaller extension on the grounds it was too big would result in him building the even bigger version he already had permission for.

Planning farces are common in Cambridge but this was certainly a notable case to add to the ever growing list.

Compare the approved, and rejected, proposals side by side:

Note the loft work was not part of the proposal under consideration, or the approved application, that was separately completed within permitted development rights.

More Details of the Farce 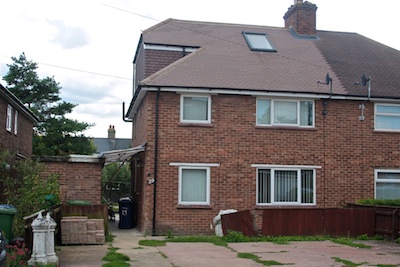 The officer whose recommendation of approval councillors unanimously decided to go against had stated in the report to the committee:

A very similar extension was approved in 2013, which is a material consideration which carries significant weight

Councillors however completely ignored this during their deliberations. The previously approved extension, for which permission was still in-force, was very similar, but extended further towards the neighbouring property than the one under deliberation in August 2014.

It is notable that no councillors called the previous application for the very similar extension in to a committee, allowing their officers to approve it on their behalf.

The application under consideration was first sent in to the council in February 2014, it was being considered by the committee in August after a deferral. Councillors had taken well in excess of their target of eight weeks to make a decision on a planning application. I think as residents of Cambridge we’ve let this applicant down by collectively, through our councillors, taking so long to make a decision. This kind of delay by the state results in people’s lives being put on hold, and in cases like this stops people living where they want to or results in people living crammed in to fewer bedrooms than they would prefer.

I filmed the consideration of the application and have made the deliberations and vote available. The video is embedded above.

Notable Points From The Deliberation

The property in question here was built as a three bedroom semi-detached house; with two reasonably sized bedrooms and a smaller bedroom on the first floor. The householder has already created an additional en-suite bedroom in the loft which the council has confirmed has come within permitted development rights.

The proposals now are to add a bedroom to the first floor and increase the sizes of some of the existing bedrooms to give four good sized bedrooms there in addition to the one in the loft. The extension would also give more ground floor space.

I don’t think house sharing is something councillors, or those who elect them, should be fearful of. I’ve expanded on my views on this in my article: Labour Plans to Push House Sharers Out of Cambridge. Shared houses are crucial to Cambridge’s economy, and enabling people who otherwise wouldn’t be able to afford to live in the city to do so. If there is a nuisance caused by those living in a property the state’s response to that shouldn’t be different depending on if those living there are related or not.

If the property was to be converted into a large House of Multiple Occupation then it would require separate planning permission. No such application had been made in respect of this property and that wasn’t what councillors should have been considering.

People need, or want, houses of various different sizes. I think it would be wrong of councillors to oppose properties gaining no more than four bedrooms; some people have large families, some want room for elderly family members to live with them and others have other reasons for wanting extra rooms, as offices, for visitors, or for other activities such as art or music.

I think extending houses to provide additional accommodation can help provide desperately needed accommodation in Cambridge. As the city gets bigger we can expect the density of housing in some areas to increase. Councillors have a role in regulating this, but I don’t think they should seek to prevent it.

My view is economic factors provide a good degree of effective regulation alone, and ensure that people’s needs are met. Councillors should only interfere with economics, and prevent people doing what they want with their properties, in exceptional circumstances, such as where there is a significant negative impact on others.

I’ve personally experienced Cambridge City Council taking an interest in where beds are in a property I have lived in (they wrongly wanted to alter the council tax liability on the basis of the arrangement of the furniture and who was sleeping where). I don’t think the state ought get involved in who sleeps where within a property. I think it only becomes reasonable to ask such questions on safety grounds when it comes to regulating large, commercial, houses of multiple occupancy.

I think we need to elect better councillors; and encourage existing councillors to read all the relevant material before taking planning decisions. I think we should demand more for our money from the planning officers, in this case I think the officer should have stepped in during the meeting to bring clarity to the question over the existing and proposed number of bedrooms, and the impact of the decision in the light of the existing permission.

It must have been immensely frustrating for the applicant to have councillors make inaccurate statements which he was unable to challenge. The one person who was able to speak up and clarify matters, the planning officer, didn’t.