On the 2nd of May 2014, in St Ives, Patrick O’Flynn was one of the warm up acts for UKIP leader Nigel Farage. O’Flynn is the top ranked candidate on UKIP’s list of candidates for the Eastern England region which includes Cambridge. The full list of candidates and parties has been made available by Tim Green on YourNextMEP.com.

In his speech O’Flynn said:

“the issue of the European Human Rights regime, that criminals’ charter run from Strasbourg. It’s a separate entity increasingly now it’s being written into the rules of EU membership. We have to be under the jurisdiction of the European Court of Human Rights and that means we struggle for decades at a time to throw out people from this country who have come to persecute the British people and spread messages of hate, it also means that we’ll either have to give prisoners the vote or compensate them with large amounts of taxpayer’s money for not having it. Well I’m not having that and I don’t think the British people are. UKIP would remove us from the jurisdiction of that court. 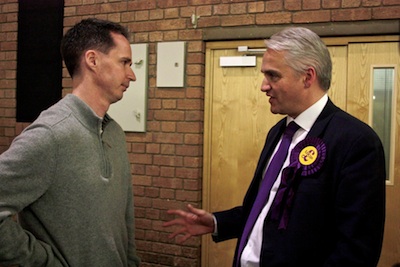 I spoke to O’Flynn after his speech. I raised three points with him:

On the first point O’Flynn told me he was broadly happy with the European Convention on Human Rights. I thought it was rather inconsistent to say that to me in person after the impression he had given in his speech. He told me that he thought there might be a need to make an amendment, or add a supplement, to the convention limiting its scope. The example he gave me was:

the right to a family life being applied to a foreign citizen who has come to the UK, committed serious crimes, and can’t be deported because they’ve hooked up with someone and had a child they’ve never really taken much interest in.

He also added that he didn’t consider prisoners have a fundamental human right to vote.

O’Flynn told me that it was elected office which drew him to UKIP and not the prospect of the role of communications director.

On the question of connecting with voters, and the remote nature of MEPs O’Flynn said “it’s not UKIP which has drawn up the system. We don’t believe in the European Parliament at all”. “It’s impossible to believe in a direct link between individuals and their representatives when you have these enormous regions”.

I don’t think it is impossible for committed representatives, to publicise what they are doing and to provide routes for interested people to discuss their views and make them known to their representative. I was unimpressed with O’Flynn’s answer on this point.

While I’m not particularly impressed with Patrick O’Flynn as a candidate. I did feel there was a difference in how what he said to me individually came across compared to what he said in his speech.

I don’t think he’s someone with a significant enough body of published positions and opinions to be able to support. Perhaps if I was a Daily Express reader I’d have a different view on that point; but from what I can see he’s a reporter, not a really a commentator sharing his own views.

During the campaign we’ve seen O’Flynn managing the party’s public affairs, acting as one of Nigel Farage’s minders (reportedly dragging Farage out of a difficult radio interview) and not focusing on his own constituency.

I agree with UKIP on a number of key points:

A dramatic renegotiation of the UK’s place in the EU and our relationship with it is one option I’d be happy with. I think a significant vote for UKIP might influence the Conservatives in the UK Parliament to get serious about their promised renegotiation which as yet isn’t being put into effect. I think UKIP will effectively oppose the expansion of the EU bureaucracy, and moves towards greater integration.

If I do vote UKIP it will be solely on the basis of their policies in relation to the European Union; and no endorsement at all of some of their bonkers policies which have appeared in past UK general election manifestos.