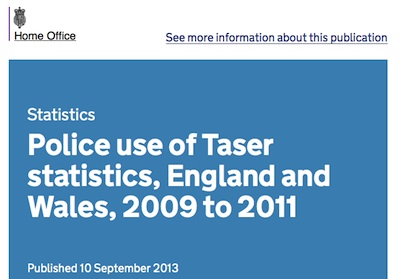 UK Police TASER use statistics for the calendar years 2010 and 2011 were published by the Home Office on the 10th of September 2013.

I have two major concerns with the release:

Forces which began arming non-firearms officers with TASER following the end of the period covered by the statistics are:

Other forces have increased the numbers of non-firearms police armed with TASER in the time after the period these statistics refer to.

The statistics released have prompted massive media coverage focused on the increased police use of TASER; the information is being dripped out slowly, imagine the scale of the reaction if the current levels of police TASER use were known.

The statistics do not help the public monitor the impact of increased routine TASER deployment by non-firearms officers. I breakdown by at least firearms officers and others would be useful, as perhaps would further detail eg. use by neighbourhood officers. I would like to see information on the number of times patrols with TASER being overtly carried occured, and the number of TASER authorised officers included in the statistics.

I have made the raw data available via Google Docs:

The next publication will be in March 2014 and cover figures for 2012 and 2013. After this point, Police use of TASER statistics will be published every 6 months

Status of the Statistics