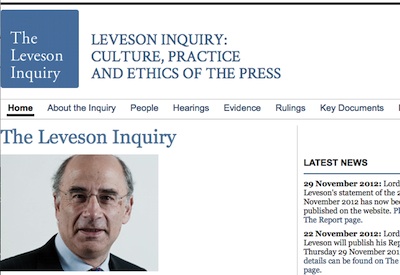 I do not want to see additional state regulation of the press, or of wider journalism. Freedom to report and comment on what is being done by those in power is an essential pillar of our democratic society.

Everyone ought be treated equally under the law. Alleged offences committed by those working in the press, and those supplying them with information, ought be investigated and where there is evidence it ought be put in front of a court.

Almost all of the shocking behaviours by the press which led to the Leveson inquiry were down to people doing things which were already illegal and which the police ought to have acted on.

There are though aspects of our law, which are generally applicable and not specific to press regulation, that I think MPs ought consider improving following the publication of the Leveson report:

If, as Charlotte Church claimed on BBC Question Time on the 29th of November 2012, the publication of stories based, without permission, on the diary of Kate McCann (whose daughter went missing) is not currently illegal then our laws on breaches of confidence may need improving, and I would support doing that.

I’m not sure there is a problem with the law in this area as it is though. While the circumstances are not identical, the publication in the press of stories based on Prince Charles’ diaries was a similar case and there Judge William Blackburne made a ruling, upheld on appeal, that, having considered the balance of the public interest and the right of Prince Charles to privacy, the material should not have been published.

Questioning the Prime Minister following his statement on the Leveson report, Cambridge’s MP Julian Huppert asked the Prime Minister about implementing the recommendation to give greater sentencing powers to the courts in relation to the offence of unlawfully obtaining personal information. Specifically Huppert called for the commencement of sections 77 and 78 of the Criminal Justice and Immigration Act 2008, which together are titled: “Unlawfully obtaining etc. personal data”. The effect would be to make unlawful disclosure of personal information an imprisonable offence. Notably section 78 provides for an exemption for journalism and disclosure in the public interest. This is an area of law which Leveson recommended be strengthened, in paragraph 54 on page 1811 which is in volume four of his report.

I think Julian Huppert chose an excellent topic for his question (though the response was a non-committal: “we need to look at this very carefully”).

Generally our existing laws were already up to the task and the key failing was a lack of action by the police but had the stronger sentencing powers for data protection breaches been in place it would have perhaps acted as a greater deterrent and allowed justice to be dispatched rapidly, nipping problems in the bud.

Self regulation of the press accompanied by the enforcement of the criminal law against journalists and their sources who breach it is I think the only option for press regulation which will be accepted by the British people, our elected representatives in Parliament, and the press themselves.

Leveson’s states in paragraph 3.14 on page 1754 that his newly proposed regulation system would need to cover “all significant news publishers” if it is to be effective.

However Leveson appears dismissive of online news saying in paragraph 3.3 on p737: “People will not assume what they read on the internet is trustworthy or that it carries any particular assurance or accuracy”. The Leveson proposals appear focused on the dead-tree media, companies who produce newspapers and magazines. In this respect I think his conclusions are short sighted and out touch so direct long term impact and relevance is unlikely.

When this was raised in the House of Common by Angie Bray MP the Prime Minister avoided the question, however we are yet to see if the scope of whatever action the government proposes to take following the Leveson inquiry and associated recommendations will extend to publications online, and if so by those other than publishers of newspapers and magazines.

p1598 of Leveson’s report notes that the system proposed by the Press Complaint’s Commission Chair, Lord Hunt and Lord Black, the Chairman of the Press Standards Board of Finance (PressBoF) ought cover:

companies in the UK, the Channel Islands and the Isle of Man who are responsible for publishing printed newspaper or magazine titles in the UK, and their related websites, and web only publisher or news aggregators with content viewable in the UK

In paragraph 6.11 on p1792 Leveson’s report states: “There will be few who think that a parish magazine or small newsletter should be compulsorily subject to a regulatory system”, however this is a subject Leveson only discusses, he does not make a related recommendation and nor does he attempt to translate what he says into the contemporary world. He doesn’t consider how an individual’s personal website or Twitter feed might be treated under a new regulatory regime.

Freelancers and Other Individuals

Meg Hillier MP asked the Prime Minister about the impact of actions following Leveson’s recommendations on Freelancers, again no substantive answer was forthcoming.

I think it is worth noting that those acting on their own, be it publishing their output themselves, or via corporately owned newspapers and websites, take much greater personal risks than staff members of media organisations generally do. The risks are particularly great in relation to defamation, where court rulings appear to be particularly disproportionate and writing material responsibly, in the public interest, can result in huge costs and stress through even responding to legal action, or merely threats, never mind if it actually gets to court and damages are awarded against an individual.

Our society’s got something wrong where the penalties and consequences of speeding, punching someone, or drink-driving can be much lighter than those which could potentially be imposed on someone for getting something wrong, even entirely without malice, in a tweet, blog post, or article while trying to inform or take part in public debate on a subject.

See: More on defamation and my suggestions on Libel Reform.

Mediation and out of court settlements have their place but I would much rather see our courts operating in a speedier, more accessible and affordable manner than continuing the trend we see in all sorts of areas at the moment in the UK to try and find ways to avoid our courts and their failings. Our courts system ought be an effective option for everyone seeking justice or redress. If Leveson had recommended a shake up of our courts his legacy could well have been a significant rebalancing of power in our society and bringing justice and fairness not just to people’s treatment by the media but to other areas of life too.

There is already an incentive for companies (and to an extent individuals) to act responsibly and have processes and policies in place to deal with complaints and circumstances which could, if not resolved as it is rational to seek to avoid expensive, time consuming and risky, legal action.

Public reporting of meetings between chief police officers and the press is unlikely itself to have a significant impact (it is too easily avoided, eg. by getting a junior officer to pass on the message), but what might have an effect is the culture change which ought result, with police officers of all ranks questioning if their contact with the media, and what they’re saying, is appropriate.

The point that the press only survives because people choose to buy newspapers and magazines, and visit the associated websites, is in my view a really important one.

Personally I don’t get my news via newspapers. Twitter generally alerts me to the fact there is a story and I use Google to find the best source to find out more if I’m interested (if Twitter isn’t pointing me to the source of the story, a decent fraction of tweets do link to the source of information they’re sharing).

If people want high quality, well referenced, reporting with links to the sources of information then they’ve got to choose that, and give positive feedback to those organisations which on occasion achieve that. As with so many things at its root we’ve got a need for better education, and people thinking through the consequences of their actions.