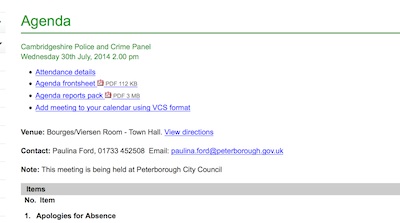 I’ve submitted some questions for the public questions slot at the Cambridgeshire’s Police and Crime Panel in July 2014. In the interests of transparency, I’m publishing them here.

The questions are circulated to all panel members so they’re an opportunity to get matters in-front of all the panel members and perhaps urge them to act on them.

Details of my suggestions are included in my submission to the February 2014 Police and Crime Panel meeting; since that meeting I have been essentially following up on the panel’s response to that submission.

While this statement was not made at the meeting, if that is the intent of the panel I suggest including such a statement within the rules of procedure. I note I suggested that the panel considers the responses from the commissioner at subsequent meetings of the panel.