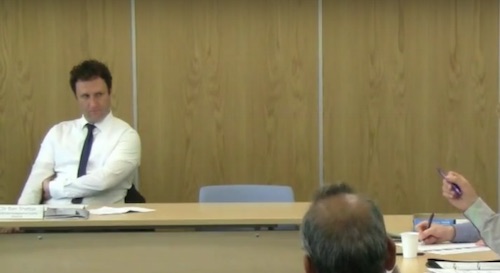 I had wanted to urge the panel to scrutinise decisions made by the Police and Crime Commissioner relating to the use of drones by the police and taking over the fire service. I also submitted a question on police constable numbers. These are matters in which there has been public interest and media coverage but which the Police and Crime Commissioner had not volunteered for scrutiny.

To guarantee acceptance (subject to paragraphs 7.9 and 7.10), the Questioner’s submission must be received by the Secretariat not later than 12 noon, on the third working day following the publication of the meeting agenda. Submissions received after the deadline may be accepted at the discretion of the Chairperson

There is no easy way for those reading the published agenda to know when it was published. The publication date isn’t included on the agenda itself either on the web-page or in PDF format.

It only occurred to me over the weekend that the publication date was available to expert users of the “Modern Gov” web system used by the panel via the “What’s New” link which presents papers in date order.

So as it turns out my submission despite being made promptly did miss the deadline for guaranteed acceptance.

While disappointing, these things happen, I don’t check the Peterborough City Council Modern Gov system for newly published documents on a daily basis, in fact I’ve never looked at their “What’s new” page before this weekend. I was doing lots of other things in the days following the publication of the agenda as well as reading it, an the associated papers, and it took me time to come to a view that I wanted to make a submission. I also wanted to check my questions were appropriate so researched the background, particularly of the various statements which have been made on the force workforce statistics by the Police and Crime Commissioner and Chief Constable.

The panel’s vice-chair Cllr Ben Shelton took the decision to reject my, submission, and all others made after noon on Friday the 19th of January, acting in lieu of the Police and Crime Panel chair Cllr Ablewhite who has been inexplicably deleted from the list of those expected at the next meeting and the panel’s membership list.

Cllr Ablewhite does not appear to have been replaced by Huntingdonshire District Council leaving the panel a member short. (Membership makeup).

The panel’s rules require submissions to be circulated to all panel members so hopefully one of the members may take up my suggestions and make contributions in light of what I have written.

Submissions are also, according to the rules, “entered” into a “book open to public inspection”, published on the panel’s webpages, and and added as an annex to the meeting’s minutes.

Even if I had presented the submission in person it is only by having the suggestions and questions taken up by panel members that progress can be made.

The Police and Crime Panel’s rules on using the “community involvement” are quite hard to navigate. In contrast Cambridge City Council generally allow questions on agenda items so long as they are notified of an intent to contribute before the meeting starts.

The first item of business at the 3 February 2016 meeting is to be to elect a new chairman for the panel. It is possible that a new chairman will take a different decision on the allowing public submissions which are not guaranteed acceptance.

Leave a Reply to Ground based resident Cancel reply