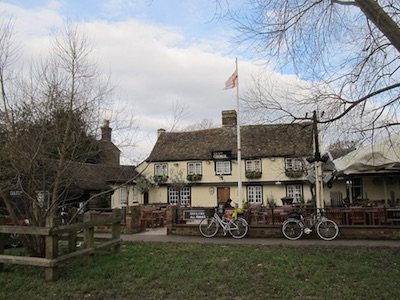 A Cambridge Pub (Thanks “Wheeltapper” for the Public Domain Image)

A recent parliamentary innovation, allowing MPs to explain the intent of their amendments to Bills in plain English, appears to have been abused for the first time in relation to an amendment which has been the subject of a vote in the House of Commons.

Charlotte Leslie MP (Labour, Bristol North West) proposed an amendment to the Infrastructure Bill which she accompanied with the following explanatory statement:

The purpose of this New Clause is to aim to ensure that any proposed demolition of or change of use to public houses and other drinking establishments would be subject to planning permission. Currently such buildings can be demolished or have their use changed without such permission being granted.

My understanding of the current law is:

The proposed new clause, which was rejected in a vote, stated:

Use classes and demolition: drinking establishments

I’ve added the links; but even with those it takes some deciphering to determine its effect.

The effect of subsection (6) would have been to completely ban demolishing pubs and other drinking establishments, even with permission. This would have put demolishing a pub, whatever the circumstances, on a par with dodgy behaviour like a developer intentionally making a building unsafe [to permit its demolition without planning permission].

I think a better plain English explanation would have been:

See this vote on : TheyWorkForYou and PublicWhip.

Optional explanatory statements for amendments were introduced in 2013/14 following a recommendation from the House of Commons Procedure Committee in February 2013 informed by a pilot during the consideration of the Electoral Registration and Administration Bill in 2012.

The majority of MPs voted against requiring MPs to provide explanatory statements to accompany amendments they propose to Bills when this proposal was put to a vote in 2013.

In January 2015 the Speaker’s Digital Democracy Commission reported in Chapter 3:


Full Fact said that a plain language description of what each amendment does should be published alongside the amendments to help the public understand what MPs are voting on. This is already done for some amendments but is not compulsory and we hope to see it quickly become the norm.

I think it’s very important that MPs deal with, debate, and vote on, laws themselves and not some abstraction of them. What we’ve seen for the first time in the case of this vote on the planning law affecting pubs is an explanatory statement written in manner which misrepresents the current state of the law and the impact of the proposed change. It isn’t technically inaccurate, but it certainly isn’t impartial.

Perhaps if we are to see a greater role for plain English and explanatory statements we will need referees to determine if they are fair or not; either that or MPs and the public will have to interpret them with great caution, which rather defeats the point.

Another option would be to make our laws more accessible, and to turn them into plain English themselves. I would like a benefits system the Secretary of State for the Department for Work and Pensions could recite annually in a short speech, a tax code the Chancellor could do similar for during the budget and planning laws on pubs which could be clearly explained to anyone.