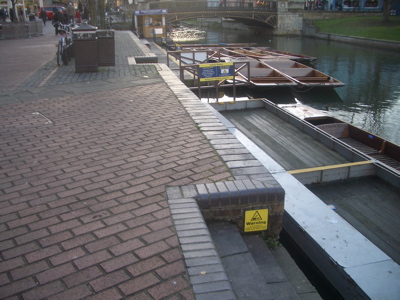 At Cambridge City Council’s full Council meeting on the 4th of December 2008 Cllr Herbert, the leader of the Labour opposition in Cambridge, asked a question to Cllr Cantrill the Executive Councillor for Customer Services and Resources about Quayside. His question was:

Given the central importance of Quayside to the life of the City, and over-riding issues of public interest, what public consultation is planned before proposals for potentially permanent changes at Quayside are implemented?

Councillor Cantrill, a Liberal Democrat, began his answer by saying that the issues were complex, and had been ongoing for some time. He said he had a duty of care to the city and its residents. He explained was trying to ensure the ownership issues were solved and said that he had the safety of the public in mind. The council was told about a special meeting of Cambridge City Council’s Strategy and Resources Scrutiny Committee which was to be held a few days later, Cllr Cantrill said they would be asked be to decide:

He did not say who the parties to the dispute are, one is clearly the major punting company: Scudamores, others may include the County Council (highways authority), the Conservators of the Cam and Magdalene College who all have interests in the immediate area. No plan has been released letting us know exactly what is under dispute, is it just the Quayside wall and steps, or does the area of dispute extend further into the river and onto the paved area? City residents have also not been told about the potential costs of any litigation, or the legal costs which have been accrued to-date. I believe these sums may be significant.

Presumably both the council and Scudamores, and perhaps others, are claiming what are commonly referred to as “squatters rights” over parts of Quayside.

Cllr Cantrill said that officers had advised that to discuss legal advice would be contrary to the interest of residents, he said it was unfortunate, but he thought there were good reasons for confidentially.

Cllr Herbert said there were potentially huge ramifications for the city, and there were a range of issues relating to access and use which should be the subject of a consultation.

The scrutiny meeting in September 2008 had been told the council was seeking to establish its ownership of Quayside with the land registry. One catalyst for action on this point was the Cam Conservator’s refusal to allow the council to modify the steps, or install guard rails and gates unless the council could prove they owned the land.

I attended the special meeting of Cambridge City Council’s Strategy and Resources Scrutiny Committee on the 8th of December 2008, where the only item on the agenda was a discussion of the Quayside property matters.

The details were to be discussed in secret, but before the meeting entered secret session some discussion was held in public. I was very impressed that despite the time of the meeting, 16.00 on a weekday, attendance by councillors from all sides was excellent, indicating the importance they attached to the subject. Labour Cllrs Herbert and Dryden were present as was Cllr Howell of the Conservatives. Liberals Cantrill, Nimmo-Smith, Taylor, Ward, Blackhurst, Bick and Ellis-Miller attended. Officers present included the Chief Executive, the Head of Legal Services, the Safer Communities Section Manager, and the Council’s Head of Property & Building Services.

A document was being passed round by the Head of Legal services as councillors arrived, Cllr Herbert asked if “it had just been produced”, clearly it had. The only document available to the press and public was the agenda, as it had been published online which contains a link to the executive summary of the officer’s report.

The council’s Head of Property & Building Services, Dave Prinsep, introduced his report. He said that the question of ownership of Quayside had arisen out of a more general program the council had in which it was trying to register all the parcels of land the council owns with the land registry. In respect of Quayside he said there were various disputes, some of which were subject to litigation and therefore sensitive. He explained, as the public executive summary of his report states, that the land ownership of quayside is based on historic usage and there is no formal documentation. Both Mr Princep’s introduction and the executive summary appear to suggest that the council is involved in discussions both with a court, and with the land registry in respect of the land ownership in this area saying: “The Council is required by the Court and encouraged by the Land Registry to work with the other parties to try and reach an agreement.”

Mr Princep reported that a compromise agreement had been negotiated and was being brought to the meeting for councillors to consider. He noted that there were long term consequences of the agreement, and that there was a need to solve the health and safety issues.

Unusually neither the chair, or the agenda prompted councillors to declare any interests. Councillor Ward spoke up to declare his interest as a Conservator of the Cam as soon as the officer stopped speaking. Cllr Nimmo-Smith also declared an interest as a conservator, and noted he was present, as an Executive Councillor and not as part of the committee.

Councillor Herbert spoke to say that he could see the reasons for aspects of these matters to be dealt with in confidential session. However he said that particularly as this matter may potentially have a permanent impact, he wanted to know who had been consulted, as well as those directly involved he asked about other interested parties and even the general public. He told the committee that he had taken the confidentially of the report he had received seriously. He said he had been “extremely careful not to divulge the contents of the confidential reports”. There is a key question here about how councillors can represent the views of constituents if they cannot discuss matters with them.

Mr Princep said that confidentiality was a key part of litigation. He also said that there was so much in the compromise agreement that involves other parties it would not be right for the council to publish it.

Simon Pugh, Head of Legal Services at the council said it was not practical to consult when there was a legal dispute.

Cllr Howell noted that there was wider legitimate concern about what the council was doing at Quayside.

Cllr Cantrill responded saying that he had personally been in negotiation with Scudamore’s as recently as the morning of the day of the meeting, he said that it was not yet a done deal. He said that there had been input from independent punters. He agreed with his officers stating that: “Public consultation was not an option in these circumstances”. He made clear that one of the options the committee were going to discuss was  “to cut a deal with Scudamores” and also stated: “This is not just a deal with Scudamore’s, made without reference to anyone else”.

Cllr Howell asked how what the council was doing was to be communicated with the public: “Is there going to be a press announcement?” Cllr Cantrill replied: “we will have to evaluate that”.

Cllr Herbert asked if the Conservators of the River Cam were i/ Consulted and ii/ Parties to the agreement. He was told No, on both counts.

Cllr Nimmo-Smith jumped in at this point to say that while that was true that the conservators were not parties or consultees they had been involved in a lot of discussion prior to the production of proposals. (From my perspective it appears that they prompted the whole issue.)

Cllr Cantrill said “this issue has had public visibility for a very long time’”, a statement I found quite baffling given low level of coverage which I have seen in the local press and even while observing council meetings. As I have said, as far as I know the public don’t even know if all that is being discussed is the river wall and steps, or much of the pavement area that makes up Quayside.

At this point there being no more contributions which could be made in public; Cllr Howell asked to speak on a matter relating to the confidential appendix, and the chair duly excluded the press and public (me) from the meeting. She didn’t appear to have her usual cue-card for citing any particular act and reason so I left as soon as it was obvious the time for me to do so came. The reasons for exclusion had after all been made very clear in the preceding debate.

I am left wondering among other things: what councillors decided to do, how much public money they are prepared to risk to seek a solution which protects the interests of city residents and how well informed they were to make a decision, for example – if they saw a plan of the disputed area(s).

3 comments/updates on “Ownership of Quayside in Cambridge”