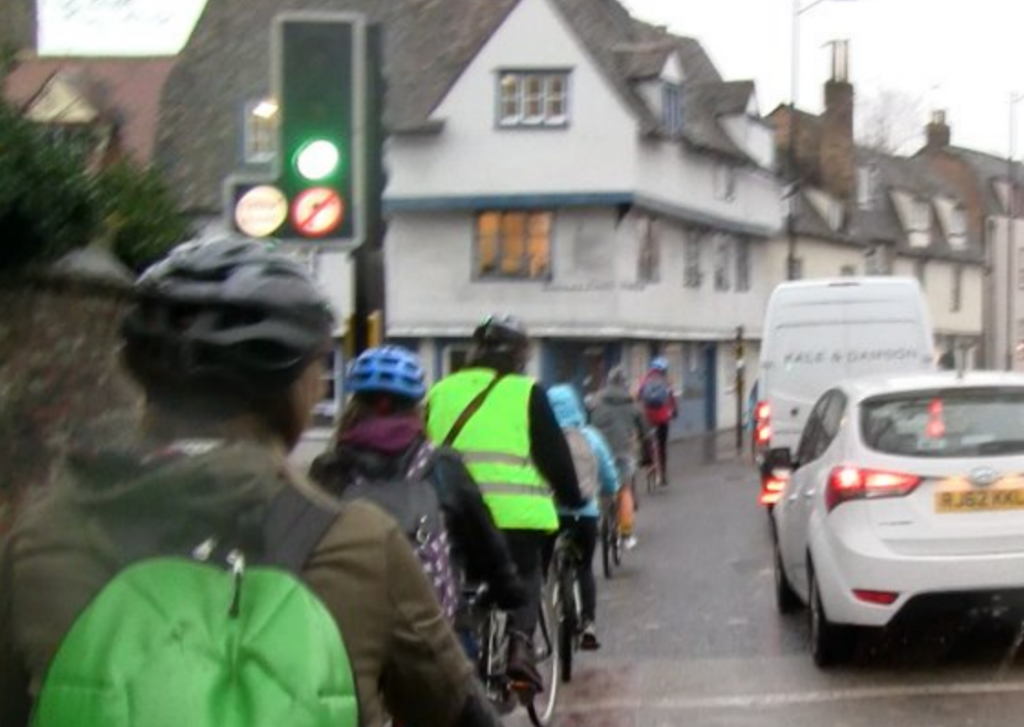 Cambridgeshire Police have recently made some astonishing statements suggesting its fine for drivers to overtake cyclists even when there isn’t really space to do so. Cambridgeshire’s Police and Crime Commissioner made a statement which doesn’t really address the issue and I have been quoted in a Cambridge News article : “Outcry as police boss ‘fails to address cycle safety’.

Below I am publishing comments, the Police and Crime Commissioner’s Comments and the original statement from the police:

My comments which I sent to the Cambridge News:

The Police and Crime Commissioner has not addressed the widespread concerns with the police statement. The police said taking action against drivers overtaking cyclists too closely was impractical in Cambridge as we would be potentially forcing motorists to drive at the speed of cyclists when there isn’t the recommended space to overtake. I would have liked to see our Police and Crime Commissioner make clear that the police got this wrong and that drivers should, obviously, stay behind cyclists when there isn’t enough space to safely overtake.

If the police really don’t think it’s reasonable for drivers to follow cyclists, rather than push ahead of them, on the city’s narrow roads perhaps councillors should take action; we could introduce “no-overtaking cyclists” areas, perhaps indicated by painting cycle lanes in the middle of the traffic lanes, or otherwise indicating that cyclists have priority over motor vehicles, due to their greater vulnerability on the road. Parts of Mill Road, Silver Street, Regent Street and Bridge Street could be suited to such an approach.

I am disappointed the Police and Crime Commissioner isn’t challenging the police stance.

If I was the Police and Crime Commissioner I would have more patrols by fully empowered constables, rather than PCSOs; PCSOs lack the powers needed to tackle motoring offences. I want to see really dangerous behaviours on the roads tackled and would rather human policing dealing with dangerous driving rather than over-reliance on speed cameras for enforcement.

The Police and Crime Commissioner’s Statement:

As Police and Crime Commissioner, my job is to protect all road users, whether car users, cyclists or pedestrians. That is why I support a multitude of different safety initiatives.

There are 6,000 roads and streets in Cambridgeshire and the police cannot be (and never have been) on every single road. With ever-reducing budgets impacting on police resourcing as well as on other bodies, it is more important than ever that we work together to find new solutions to keeping all of our road users safe.

People need to take a sensible approach to overtaking cyclists and I’m pleased to see the majority do. The code is clear – don’t get too close to the cyclist you intend to overtake, use your mirrors and signal when it is safe to pass, allow plenty of room without putting other users at risk.

My first priority is to reduce road deaths in our county, fatalities which are primarily car drivers caused by other people driving dangerously or inappropriately. That is why earlier this year I invested in a Casualty Reduction Officer. Jon Morris has years of experience in dealing with these issues and continues to work on a daily basis with a wide range of statutory and non-statutory agencies to help educate all road users about keeping safe. One such scheme is Speed Watch which I’m pleased to see now has over 2,000 volunteers. I would encourage anyone in any parish who wants to set up a scheme to contact Mike Brooks, the Force Watch Coordination Officer: mike.brooks@cambs.pnn.police.uk.

Another initiative is the introduction of Drive iQ which I introduced in June this year. The web-based learning programme is helping educate young people how to keep both themselves and others safe while driving.

It is clear that enforcement alone will not reduce fatal and serious collisions and it is vital the police focus work on preventing them from happening in the first place.

We have been liaising with officers in the West Midlands about Operation Close Pass and have explored the possibility of implementing something similar locally.

The average road is approximately 3.5 metres from the kerb to the white lines. Cyclists are advised to cycle 0.75 metres away from the kerb to avoid drain covers and an average car is about two metres wide. Operation Close Pass recommends drivers leave about 1.5 metres when passing a cyclist. If we add all those figures together it would mean drivers are moving into the opposite lane to overtake.

For Cambridge city where roads are narrower and often very congested we would be potentially forcing motorists to drive at the speed of cyclists when there isn’t the recommended space to overtake.

Cyclists are vulnerable road users and it’s important that we are doing all we can to make the roads safer for everyone but at this time we don’t believe Operation Close Pass in its current format is practical in Cambridge.