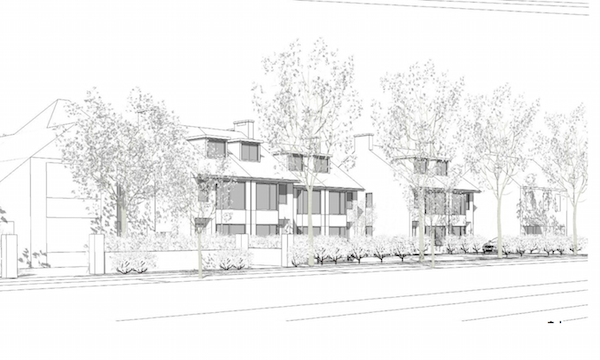 Plans for six new homes on the site of three existing properties on Milton Road in Cambridge have been submitted to Cambridge City Council.

I think it is excellent to see investment and development in the area and the proposals are for high quality modern homes. I suspect the proposals will approximately double the number of people able to live on the site, providing more, much needed, central Cambridge accommodation.

Despite my general positive position in relation to the redevelopment I have suggested planning permission ought not be granted for the following reasons:

I see the County Council as Highways Authority have noted one car parking space per four bed home will probably not be sufficient; I agree with them on this.

I would like to object to this proposed development on the grounds it fails to respond to its context and therefore does not fulfil the requirements of policy 3/4 of the 2006 local plan.

The proposed second floor dormer windows facing Milton Road on the front of the proposed properties would be the only such windows on the stretch of Milton Road between Arbury Road and King’s Hedges Road which the site is situated on. It is my view that due to the presence of the second floor front-dormers the proposed development would significantly fail to be in-keeping with the existing properties around the site.

I note the applicant’s contextual photos on page six of the design and access statement includes a property with a second floor front-dormer which is on the stretch of Milton Road on the other side of King’s Hedges road; while the road name is still the same this is quite a different location, the road is wider, and there are a number of commercial buildings (the pub, hotel, car sales, and business premises) in the vicinity, as well as a major junction and a mini-supermarket.

I also appreciate that councillors will want to look at the amount of additional much needed accommodation the proposed development will provide over what is currently provided for on the site. I would like to see the officer report explicitly state the number of bedrooms currently within the existing properties, so that can be compared with the twenty four bedrooms proposed.

My view is the proposals amount to a slight over development of the site and the second floor front dormer windows are an undesirable symptom of that.

I suspect the developers are trying to get as many properties, and bedrooms, on the site as they can, so there are some odd arrangements as a result of the overcrowding with one property’s bins being against another’s wall and the path to the back garden of one property being along the wall of another. Some of the bedrooms appear to be rather small. I would like to see this initial application, which has perhaps been made by the applicants trying it on to see what they might be able to get away with rejected, with councillors indicating a slightly less dense redevelopment would be acceptable.

The owners of the proposed homes are going to have to share the frontage, and some paths between the homes, which I know is common elsewhere but does in my view complicate things for future owners – perhaps they’ll have to get together to form a management company – or otherwise club together to maintain the shared elements of the grounds. The character of other properties on the road is largely one of independent self contained homes without such shared frontages or paths, again this is a way in which the proposals fail to respond to their context.

The design and access statement document says the developer doesn’t want the trees in the plans considered as part of the application but wants a planning condition on the planting. I am concerned and surprised by this approach. I hope it will be clear if planning permission is given if the trees shown in the plans are required to be planted.

Four ornamental cherries on the frontage, or other non-fruiting trees which are expected to grow to an appropriate scale, would in my view be appropriate and if tree planting is to be included in a condition I would suggest requiring the inclusion of such trees (in suitable tree-pits so as to avoid future damage to the highway).

I note sometimes developers and architects consult neighbours before submitting a planning application, it’s a pity they didn’t do that as far as I am aware in this case.

The proposals involve the loss of a bungalow. I would like to see the council take account of the loss of a bungalow and the fact none of the new proposed homes offer on-the-level living; so the city is losing a valuable asset – a home which particularly suits elderly or disabled residents. One could envisage one of the units having say a ground floor flat and a maisonette above to compensate, and that would also provide a wider range of property types, and presumably, prices, on the site.

This development will involve moving a bus stop, though the specifics are not included in the proposal. I suggest the bus stop should move away from Fraser Road so it’s not on the junction which has been the location of a number of recent collisions; this might get more important if there are more buses servicing the stops on Milton Road in the future. I understand this might well be outside of the scope of the formal planning process but perhaps those determining the application could make their views on the matter known. I see a representation from 241 Milton Road opposes moving the bus stop towards that property, perhaps it could be moved in that direction, but minimally. I would be surprised if the stop became a floating bus stop and am not aware of any plans for that, though the plans for the remodelling of the road are not yet finalised.

It’s odd the documents don’t mention remodelling the road, and the plans omit the existing cycle path on the pavement. Officers and councillors considering the application should make themselves aware of the current road layout and the Greater Cambridge City Deal proposals for change.

On cycle parking I think sheds in the back gardens, accessed over the grass and via, in some cases shared paths, are not convenient enough provision. I would like to see paved access to the cycle parking, and it ought be on the front of the properties. I suggest the current plans clearly do not fulfil the requirements of policy 3/12 and perhaps 8/6. The proposed design does not appear to reflect the fact that many of those who live in the area use bikes as a primary form of transport. I expect usage of bikes is likely to increase if the proposed cycle infrastructure improvements proposed by the Greater Cambridge City Deal materialise.

I am very supportive of investment in and development of the area, and the provision of accommodation for more people, I do though think those aspects of the proposals I have mentioned above need addressing before the proposed development can be deemed acceptable and to meet the requirements of Cambridge’s planning policies.

I live close enough to the proposed site to be considered a specifically consulted neighbour when it comes to the planning process.

The dwellings are have potential to generate a demand for car parking in excess of the one-space per dwelling provision proposed.

Certainly most three or four bed homes on the street appear to have multiple cars at the moment.

The redundant vehicular crossings of the footway must be removed and replaced with full face kerbs.

This needs to become a planning condition and needs to be enforced, there are many examples around the city of disused drop-curbs not being removed eg. on Riverside and on Green End Road.

The council’s Landscape Architects have said they are unable to comment on the application as it lacks a “landscape plan” and they say they think one ought be provided.