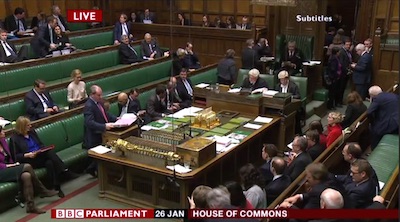 On the evening of the 26th of January 2015, MPs unanimously passed a new law on “fracking” or “hydraulic fracturing” through the House of Commons without a vote.

The new clause (NC19) for the Infrastructure Bill was put forward by Tom Greatrex MP, Labour’s Shadow Energy Minister. It introduces a series of conditions which have to be met before “hydraulic fracturing” can take place.

The conditions look well meant, but they appear easy to circumvent.

When the Government like an idea which has been proposed by opposition, or backbench, MPs, but which has not been expressed in a manner suited to becoming law, the Government sometimes vote it down and write it in a proper, robust, manner and reintroduce it. It appears to me as if this is a case where the Government should have followed that course of action.

Any hydraulic fracturing activity can not take place:

That the spelling of impact isn’t right is a red flag, it shows those writing this amendment didn’t really think it could become law so didn’t take much care over it.

While an environmental impact assessment is required there’s no mention of reviewing the conclusions of that assessment and considering if the impacts it finds are to be deemed acceptable or not.

This condition can be met by simply carrying out an assessment and then ignoring it.

What is the purpose of the inspection and monitoring; who will look at the results?

What “protected areas”? Who can define them?

Deep-level land is defined in the Bill as “any land at a depth of at least 300 metres below surface level”; is this just seeking to change that definition? (The Bill does cover broader exploitation of petroleum or deep geothermal energy not just hydraulic fracturing, so perhaps a distinction is intended?)

What if a planning authority considers the cumulative impact and determines it’s negative? They’ve still considered it and met this “necessary condition”.

What if the provision is negligible and nominal? It could still be a “scheme” for the purposes of meeting this condition.

This appears to be a rather impossibly high hurdle; how will a body wishing to exploit petroleum or deep geothermal energy know who’s living in an area? Does this mean that any individual who says they’ve not received a letter from the company will be able to block a scheme?

A water company could be consulted, and object, but this “necessary condition” would be met.

Following the unanimous approval of the new clause, without a vote, many Labour MPs tweeted the same image:

There was no announcement. The House of Commons passed the new clause, it didn’t announce anything.

I actually approve the use of “Parliament” rather than House of Commons as I don’t think we should pay much attention to our unelected Lords and we should get rid of them.

I think the use of a positive and a negative and then a positive when saying “agreeing to prevent fracking going ahead” is language which is hard to parse.

The important point is, as I’ve listed above, I don’t think these are tough protections.

I think new ways to obtain energy need to be encouraged. We need to ensure they are carried out as safely as possible with minimal risks to the environment and health.

A role of government when regulating activities such as hydraulic fracturing is to ensure any costs to wider society are passed on to those who will profit from the exploitation and extraction.

We need to accept there are risks, and MPs need as much information as possible to weigh up the risks, such as those to the environment, with the benefits to the economy, the resilience of our energy supply, our ability to heat and light our homes and hospitals over upcoming winters and more.