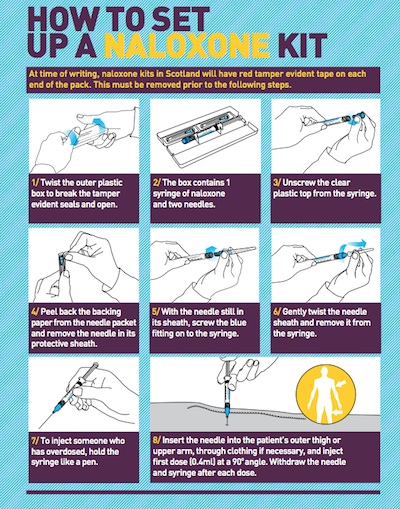 Users of opiates (eg. heroin) living in Cambridge’s homeless hostels have been provided with naloxone injection kits, and have been trained to use them. Naloxone is a drug which counters the effects of opiates. The scheme aims to reduce the number of deaths from opiate overdoses.

The 6 month Naloxone Pilot, to help safeguard people at risk of an opioid overdose, has commenced. Cambridgeshire Drug and Alcohol Action Team (DAAT), Cambridgeshire Constabulary, Inclusion Drug Treatment Service, East of England Ambulance Service, the hostels in Cambridge and with the support from Link – Up and Feedback agreed to run the pilot which is taking place in Cambridge city. It will run until February 2014 initially, at which time it will be reviewed. The volunteers who will be carrying the kits are residents of one of the hostels in the city.

Naloxone is a type of medicine called an opioid antagonist. It blocks the actions of opioid medicines such as morphine, diamorphine, codeine, pethidine, dextropropoxyphene and methadone. It rapidly, but temporarily, reverses the effects of heroin and other opioids. By providing a drug user with Naloxone it is hoped that this will lead to a reduction of deaths from an overdose.

Before an individual can carry a Naloxone kit it was agreed that they were required to undertake training relating to overdose, basic life support awareness and administering Naloxone. This training took place at the beginning of June 2013 to over 30 attendees who were both professionals and service users from the Cambridge city area, this training was then repeated with a number of service users in August 2013. Attendees were also advised about how to safely dispose of the Naloxone kit if it is administered.

It appears an injection kit is being used in Cambridge as safe needle disposal following use is mentioned. A nasal delivery system is also available (its use has been reported in Scotland).

The NTA overdose and naloxone training programme for families and carers produced by the NHS National Treatment Agency for Substance Mis-use document (Appendicies) is a report on a pilot starting in 2010 involving training people to administer naloxone in 15 sites across England. 18 overdoses where naloxone was used are reported; with a note adding:

Most of the incidents were ‘opportunistic’ interventions, where the carer used naloxone on somebody other than the person named on the prescription

It isn’t clear to me what this means; in that pilot carers were trained and issued the kits; they are described as including “family members (parent, partner, sibling, son or daughter), housemates and close friends.” I wonder if the statement that in most cases the drug was used on someone other than the named person suggests those who used the kits did so on someone they didn’t have a close relationship with who had overdosed.

The NTA report on the pilot which began in 2010 doesn’t include any clear conclusions or recommendations. It does provide the following background:

In addition to the naloxone pilot Cambridgeshire’s Drug and Alcohol Action team has issued a “Heroin alert” dated October 2013 in which it provides advice to users on how to make their drug use safer, including advising: