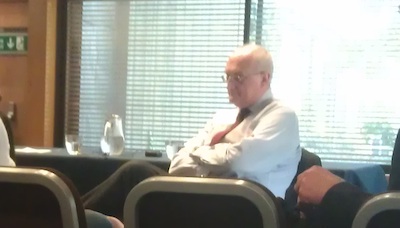 The head of Cambridge University, Vice Chancellor Leszek Borysiewicz has called on the Government to make the minimum wage, a living wage. Borysiewicz, speaking at a Cambridge University Students’ Union Q&A event on the 28th of April 2014 also urged elected representatives to speak out and share their views on the subject.

Borysiewicz explained that the university couldn’t commit to paying the “living wage” [as set by the Living Wage foundation] due to the self-appointed, non-statutory, nature of the group and its approach.

The Vice Chancellor said there are just 83 people within Cambridge University (not including the colleges) paid under the “living wage” and that he’s personally looked at the individual cases and has assured himself most of them have chosen to be in the position they are.

Why are all university staff not paid the “living wage”?

Cambridge University Vice-Chancellor Leszek Borysiewicz: This is a tricky one. I have personally some sympathy with the position that you have but it’s a very difficult one because the “living wage” is not set statutorily or evidentially. The “living wage” is actually set by a group of individuals, self appointed, who define what the “living wage” is. It is not a statutory governmental body such as that which sets the minimum wage. So the university’s position has always been that actually we feel that the living wage might well should be the minimum wage and in which case the government has got to take action and find out what the living wage is.

So I can’t put the university into a position where its beholden to a group which is self-appointed to approve its salaries. For the university, for those who are actually receiving below the living wage, in that gap between the minimum wage and the living wage, as far as I’m aware and I’ve looked at this with Jeremy Saunders the Pro-Vice-Chancellor for internal affairs, the number is about 83 I think and we’ve looked at the individual cases and these are either trainee positions, or part time positions, that people will very often choose to be on, and which allow them to benefit from other forms of remuneration.

The number is much greater if we look at the colleges, but I can’t comment on that because I do not set the standard for what others do across the [collegiate] university.

So yes we are doing things to try to see what we can do for those who we’ve looked at who we don’t pay the living wage. What I would like to see is the current minimum wage made the living wage but remember its forever escalating; its like stepping on an escalator, you have to do something after a period of time.

Another thing you have to remember is we’re part of a bargaining consortium that we still have to work with; we’re just one institution among many, that actually engages with central pay bargaining, and it’s therefore not just up to us unless we became completely independent and entered individual pay bargaining as a single institution. There are pros and cons to that and I’ve worked with both systems and well there are people who are keen to retain maximum collective pay bargaining as part and parcel… the long term solution is going to be reaching an agreement on how we move forward and we are going to be part of those discussions as they happen.

Cambridge University Vice-Chancellor Leszek Borysiewicz: I don’t think that is actually going to change things one jot or one iota. We are looking at ways we can actually help that. But I’ve got to be careful that I don’t reinforce the validity of the “living wage” as currently defined, until it is actually enshrined in statute that is essentially the position is defined. The problem is that those who are going to define the living wage are actually self-appointed. Now I could stand here and say everyone should get a million pounds a week, but no organisation is going to actually do that. But they are an independent group but they are not actually constrained or having to act within statutory regulations and at this very emotive level I do believe there is a responsibility for elected representatives to give their view. It’s open to all political parties to say this is what they want to do and that they will change this particular area and when they do then we will enguage with it.
Does Cambridge make a difference? Well you’ve seen how many universities have made different statements and it hasn’t actually changed it one jot as far as I can actually see in terms of wider acceptance of this particular measure, largely because it isn’t actually a measure enshrined in statute.

Do you think that Kings’ first bursar was wrong to pay all Kings’ staff the living wage?

Cambridge University Vice-Chancellor Leszek Borysiewicz: He’s entitled to. He did what he was required to by Kings’ council. If that’s what the council decides its what they want to do then that’s their job to do it; they’re an entirely independent body. Of the other colleges others some do not so there’s a variable group even within the colleges of Cambridge as to how they chose to pay the living wage.

I think the Vice-Chancellor’s position that Cambridge University cannot make itself subservient to an unelected, unaccountable, group setting the “living wage” is entirely right and reasonable.

That some people are happy to be paid less than the living wage to train at the university is not really surprising given that many thousands of people pay huge sums of money to be trained at the university as students.

One of the problems with minimum wage, and living wage, caps is it can reduce organisation’s ability to offer innovative and flexible arrangements that the individuals involved might well be quite happy with; for example paying someone a small amount for work as a technician or lab-manager, but waiving a tuition fee for example.

In environments in which many people will basically pay for the opportunity to work in, or work for free, (as a graduate student) its not surprising to me that there are people happy with arrangements that see them paid under the living wage.

I have experienced some very odd views towards remuneration; and money in general, within Cambridge University. One college fellowship I saw advertised offered, as payment, the amount of money required to take the appointee’s income up to a set level, of I recall about £20,000. The amount paid by the college was to be reduced in light of the individual’s other income from any other sources. I came across this about a decade ago, but my mind still boggles imagining the rationale of the committee of college dons who came up with it.

The thinking was presumably a funded post-doc in a science or engineering subject ought not be paid extra for their college role; whereas a poet without any funding from outside the college ought get more from the college to support them.

I’ve seen publicly funded jobs given out on similar grounds – the thinking being we’ve got someone here who needs some money, we’ve got this job we can offer them, lets put the two together. Rather than finding the best person for the job to get the best value for taxpayers’ cash.

Personally I’ve done relatively substantial amounts of work for free, inside and outside of the university; either expressly volunteering, out of a sense it was the right thing to do, or in an effort to go the extra mile, gaining benefits in terms of experience and perhaps also hoping for a reference which would lead to impactful paid employment. On at least three occasions within the university I found myself in a position where others were being paid for work I was doing; such is the state of the chaotic, and rather feudal, institution.

I wouldn’t want to remove people’s opportunities by over-regulating the employment market. I don’t want to remove opportunities for those willing to work for free, or for less than the living wage, in return for training or experience; but we do need to protect against people being exploited. The really important place we need regulation to prevent exploitation is where people are required to take jobs under threat of losing their benefits if they do not take them on. There are also opportunities for exploitation within the university and I think there should be oversight of arrangements of potentially exploitative arrangements by panels of staff who are not directly connected with those involved.

While the Vice-Chancellor may have been able to personally review 83 employees paid under the living wage, I suspect the number of those doing work on a self-employed basis or in return for tuition fees, or access to facilities, across the university will be far greater.