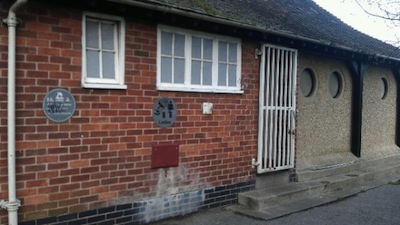 On the 23rd of August 2013 Cambridge based artist and singer Robjn Barker tweeted to report:

Cambridge City Council runs twenty public toilets in the city. None, not even the coin-operated ones, are open after 8pm in the evenings. Those at Barnwell Road close at 4pm and the facilities on Jesus Green are locked up at 6pm even though at that time in the summer the green is usually still teaming with people, many of whom approach the toilets during the evening expecting them to be open.

I have previously questioned the city council’s toilet opening times, asking why the timers which lock the coin operated toilets can’t just be re-set to make them available later. At the time the executive councillor responsible for toilets was Cllr Mike Pitt, he replied to me to say:

Night opening requires facilities to be and look robust, and can increase repair costs.

In response to the report of Robjn Barker’s mother pissing on the bowling green Cllr Colin Rosenstiel (Liberal Democrat) who as a Market Ward councillor represents the city centre said:

Why don’t people go before they go (leave the pub/club)?

following the inevitable minor furore a councillor making such a comment would be expected to invoke he sought to clarify his point by repeating it adding:

Something providing public toilets which are accessible in the evening might reduce is the number of people urinating in the river; which can, as unfortunate events have shown, be a risky and dangerous thing to attempt.

Cambridge Liberal Democrats have spent huge sums on new toilets they have intended to be architecturally striking; including the £285,000 “Armidilloos” on Midsummer Common and the Zinc roofed toilet block shaped as a boat between Chesterton Road and the River.

In February 2013 the Executive Councillor for Environmental & Waste Services (bins and toilets) Liberal Democrat Cllr Jean Swanson was asked by her scrutiny committee what she was doing about public toilets. The meeting minutes record her response as:

The portfolio plan looked at mapping current toilet facility provision with a view to a possible future scheme, whilst recognising the needs of the night time economy.

By March 2013 we will have: Review toilet provision across the City with the view to investigating the need for a ‘Community Toilet’ scheme

In relation to what was the community toilets idea she added:

Payments to other providers, such as shops and restaurants, for the public use of facilities had been ruled out.

In June 2013 Cllr Swanson approved a project to refurbish the Silver Street and Lion Yard toilets.

Labour councillors appear to understand that public toilets are functional, things people actually want to use, and not just an opportunity to spend public money on fancy architecture. They appear to have the support of many people: a 10,300 person petition to keep the toilets at the Lion Yard shopping centre on the ground floor was presented by Labour candidate, now councillor, Gerri Bird, at a full council meeting in 2011.

The latest Labour alternative budget for Cambridge presented in February 2013 made no reference to public toilets which suggests they are generally happy with the current situation and have no plans to change things.

Cambridge City council is currently running a consultation, open until the 13th of September in relation to the Lion Yard project. The council is planning to spend £300,000 refurbishing these toilets; they are including two unisex toilets for those who don’t want to enter either the male or female areas (and presumably for anyone else too).

There are some positive aspects to the design; it will be possible to enter and leave to use a urinal without having to go through any doors for example.

I will respond to the consultation to suggest that some, or all, of the facility be built with a view to it being tough enough for unmanned evening opening. There is an attendant’s office so presumably the plan is that it will be generally manned (though this isn’t made clear).

The plans show full length mirrors for the female toilets, but not the male.

The detail really isn’t sufficient to comment in detail; questions such is if there will be any coat hooks in the cubical, what kind of soap dispensers, taps, or hand dryers will be used aren’t addressed.

I think the state of the toilets on Jesus Green are particularly poor. They are near where many visitors to the city get dropped off and picked up by coach and must make a terrible impression; they are also well used by city residents visiting the green for sport, picnics, or passing through on their way to and from the city centre.

My efforts to lobby for improvements to the Jesus Green toilets have been frustrated by councillors deciding to delegate much of the work related to the current lottery bid which may fund improvements to the secretive and undemocratic “Jesus Green Association”, and for the council’s input to be via the “Jesus Green Working Group” a committee which meets secretly behind closed doors. I and others regularly complain about this and urge councillors to use the public West Central Area Committee so details of what is going on, including what decisions councillors are making, can be made public.

An extract from the current bid document published in March 2012 states:

We aim to address the current users’ perceived shortcomings of Jesus Green and the relatively low dwell times spent there by providing good quality facilities, especially toilets and catering provision.

The council’s webpage on the bid says lottery deadline for a detailed bid is the 31st of August. As of the time of writing, a week before that deadline no detailed bid document has been linked (never mind considered in public by councillors).

In a response to a FOI request in December 2012 Cambridgeshire Police made the following, typically garbled, statement :

Under Home Office Counting Rules urinating in a public place does not constitute an offence under the Public Order Act, it is a summary offence for which no crime would be raised. Please note it only becomes an offence if the genitals are seen and then other legislation would be used.

The response reveals around 20 people a year are stopped by the police citing the public order act for public urination in Cambridge.

My own view is urinating discretely against a tree or behind a hedge is perfectly reasonable, particularly late at night; perhaps the public order act needs to be reformed if the police think they’re free to deem such behaviour “harassment, alarm or distress” and issue £80 fixed penalty notices for it.