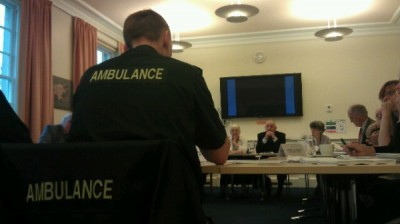 Cambridgeshire and Peterborough Clinical Commissioning Group is currently withholding 2% of the money it usually pays each month to the East of England Ambulance Service.

The Clinical Commissioning Group (CCG) is a group of local GPs and others which is responsible for buying the region’s ambulance service from the ambulance service. Withholding 2% of the service’s funding is the way the group have decided to respond to the service’s failure to come up with a plan to sort out problems with ambulance response times.

My view is that this shows up the crazy things which happen when we ask civil servants to pretend they’re commercial entities operating in a market place.

Reducing the amount of taxpayer’s money being shifted from one public body to another isn’t going to achieve anything; this isn’t real money to any of the civil servants involved, it isn’t going to affect their incomes or the viability of their organisations. Elements of the public sector are not businesses and don’t respond in the same way as a business would.

There are no local elected representatives responsible for either the CCG or the Ambulance Service; this is an area where we lack local democracy. We have Ministers who are responsible for distributing taxpayers money to the GPs via NHS England but no local accountability.

Rather than a bizzare financial penalty; which won’t really impact anyone I would rather see local councillors taking a lead, being clear about what the public want (an ambulance quickly if one is needed), finding out what the problems are and giving clear directions to the civil servants involved so they can address them.

While our local councillors don’t hold the purse strings in this case; they do have influence.

In 2012 I asked Cambridgeshire County Council’s relevant scrutiny committee to take an interest in the performance of our ambulance service, which it did (minutes)

That meeting wasn’t particularly productive as the councillors all appeared to think they already knew what the problem the ambulance service has been having is – waiting to handover patients at hospitals. Councillors didn’t appear interested in extracting more information from the service or holding those responsible for running it to account.

A major omission from the data published by the CCG and Ambulance service is information on how badly the targets are being missed in those 25-30% of immediately life threatening cases where ambulances are not arriving within the target 8 minutes.

I would like to see a graph showing how badly this target is being missed; and perhaps a table showing in how many cases the wait is over say 10, 15, 30, 45 minutes .. or whatever categories make sense to monitor given the data.

It may well be that what we need locally is not primarily better performance against the national target; but a reduction in the frequency of times it is wildly missed.

I suspect, but don’t know, that the CCG’s action against the ambulance service is not really due to what is shown in the report; the missing of the target, but frequent reported cases of very long waits for ambulances which come to light via the press.

I think elected representatives should represent the views and interests of their constituents to whoever they need to, if they have specific power and responsibility in the area or not. As elected representatives councillors can be influential within all parts of the public sector and even when lobbying commercial behemoths like Tesco (who my local councillors have invited into one of North Cambridge’s Area Committees).

A meeting of the CCG is to be held in public in Cambridge on the 7th of January (meeting papers). p69 of the Integrated delivery report (PDF) to be presented to that meeting explains:

A contract query was issued by the consortium on 14.08.13 on the failure of EEAST to deliver against the Red 1, Red 2, and Cat A19 targets in the contract year to date.

Therefore, with effect from December 2013, 2% of the monthly contract sum is to be withheld until such time as EEAST provide satisfactory RAP

The actual and potential implications of this under perform ance on clinical quality and safety, is currently being reviewed by the Consortiums Clinical Quality and Governance group. The Clinical Quality Commission commenced a follow up inspection w/c 09.12.13

The performance statistics referred to are reaching the “Red 1″ “Red 2″ priority calls within 8 minutes. The “A19″ target is an ambulance arriving to transport a patient within 19 minutes.

The latest figures published by the Ambulance Service are for November 2013 and show that in Cambridgeshire and Peterborough 8 minute target is being met in 76.8% of “Red 1″ cases and 69.09% of cases categorised “Red 2″.

Notably the figures for the same month reported to the CCG (p12 of the “delivery report) are slightly different; with 74.52% for “Red 1″ and 68.47% for “Red 2″. This inconsistency doesn’t give me confidence in the figures reported.

The performance threshold / target used by the Clinical Commissioning Group for both categories is 75%.

Presumably an update on the position will be provided at the meeting.

The report to the Clinical Commissioning Group also shows the Ambulance Service is not working with hospitals on the issue of handover delays, it states:

A meeting with HHCT and EEAST was arranged for 22.11.13. but EEAST did not turn up so meeting cancelled. This has been escalated within the CCG and needs to be resolved by EEAST in the next 2 weeks.

General practitioner led commissioning is the policy behind giving much of the cash for NHS services in Cambridgeshire to the Clinical Commissioning Group who then buy things like hospital services, accident and emergency, out of hours care, and ambulance services from hospitals and others who provide it.

Cambridgeshire and Peterborough’s CCG Governing Body is made up of 4 lay members, 4 Executive Directors of the Clinical Commissioning Group, 8 GPs and one hospital doctor. The GPs are not even in a majority locally.