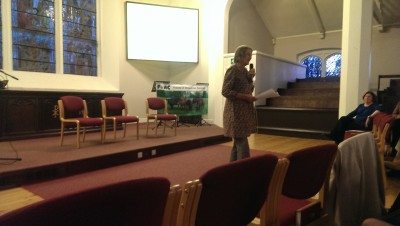 Susan Stobbs, Chair of the Friends of Midsummer Common, at the 2015 AGM

I attended the AGM of the Friends of Midsummer Common in Cambridge on the 22nd of April 2015. The meeting was commendably held in public and many of those attending were, like me, not members of the group.

The meeting heard that the group, which receives public money via Cambridge City Council, has bought a bat detector. The group’s official Twitter account has confirmed it was purchased with public money. I think it is astonishing that while the country is borrowing to support spending on public services, and cutting public services, that a bat detector to be used as a toy by a group which includes some of the wealthiest people in the world has been deemed worthy of spending public money on. The device isn’t to be used an a systematic manner but for members of the group to enliven their walks on the common. I think we should stop unnecessary public spending until we have a balanced budget and have paid off the national debt; borrowing money now risks high interest charges later and means in the future money which could have been spent on public services won’t be available for that purpose as it will need to be used to pay interest on and re-pay debts. The bat detector is just an example of the failure of elected representatives to get a grip on public spending.

The bat detector, while paid for by public funds, isn’t available for use by the public at large, only by members of the group. I think when elected representatives spend public money on assets they should ensure public access to them.

It appears councillors first approved money for a small gazebo but the group then lobbied for permission to buy the bat detector with the cash instead.

The meeting heard that there is a proposal to widen, by an extra meter, the diagonal path across the common from North Terrace to the Cutter Ferry Bridge. The chair of the Friends of Midsummer Common, Susan Stobbs, said she expected this to be controversial.

Widening of another path near Victoria Road was also mentioned.

I just wanted to assuage some concerns really because we’re not looking to create a motorway so you know so. In terms of the Cutter Ferry Path it is used hugely by hundreds if not thousands of cyclists a day because it is a strategic route going from one side of Cambridge to the other. And what as has been said we’re looking to do is probably increase the width by about a meter. In actual fact we’ve already got that width with the damaged grass so what we’re actually trying to do is create a path which is workable and protects the grass rather than damaging it. Our policy is as the archaeological presentation showed this evening – the use of an area changes over time and I personally think that part of the role and use of the common is to be able to cross safely and get from one side of Cambridge to another and what we’re trying to do is to help that really. So Susan and others have been involved. There is a stake holder group. It’s not between the county and city, I have brought those two organisations together. But it is a whole range of other stakeholders and I suspect the cycling campaign will be involved and there will be others and a public consultation as a period and we will try and look to find something which matches the specific needs and makes for a safer common.

The proposal is to possibly trial some of the solar studs that have been used elsewhere which basically mark the park at night when it is incredibly dark crossing the common. So the idea is it will give some indication at a very low level as…

Cllr Cearns was interrupted by a heckler suggesting that cyclists should have lights (implying the paths shouldn’t be lit). A further speaker said:

I want to ask if studs make cyclists go faster. The point is not the fact they use the paths but the speed that they go. I’ve seen them go-over on Brunswick Gardens on the corner, three cyclists have gone on that corner so what do you propose?

There were further complaints about dangerous cyclists.

My view is that flattening the camber and ensuring flush edges would go a long way to improve the path in question.

Concerns were raised that wider paths would lead to faster cycling. One person suggested wear alongside the paths was due to runners opting to run on the grass rather than the path.

The meeting was told that the Friends of Midsummer Common committee was opposed to additional lighting on the common and would be arguing against the increasingly popular lobby in the city calling for better lighting of the Cambridge’s green spaces.

any increase in lighting gives people a false sense of security and is very bad for the increase in biodiversity on the common which is one thing that we are working to do quite a lot particularly this year. I think it’s very useful to have that statement in our management plan because there is now quite a big pressure group within the city to better have all the lighting on all cycle paths on all open spaces within the city. This is something the committee has discussed and we do will not wish to endorse this we feel that we have no objection to altering and removing and replacing the existing lighting with better lighting or more energy efficient or more aesthetically pleasing lighting like they have done on Jesus Green but to increase the amount of lighting on the common would be a tremendous loss to the beauty of the common.

We had lovely fruit on the orchard except for about a week before the picnic when mysteriously over a few nights all the fruit disappeared. We never did catch the culprit.

The group has spent around £700 of public money on a new noticeboard; Stobbs said:

One of the uses for our new noticeboard will be to we can now explain what the orchard it. It is a community orchard, it is for everybody who can pick apples and plums and pick up windfalls but we need to establish a bit of etiquette which is that you don’t come at night and take the whole lot of the fruit and you leave some for other people. I think the notice board will help there.

A big survey of European cities, surveying the difference in mental health between the rich and poor in different regions was mentioned. The chair stated that the one most important thing for improving mental health in poorer communities is easy access to green open spaces. The chair noted that this can be used to help justify the group’s applications for public money as they are required to show how they help the more disadvantaged people in the city.

Article: Living near a park closes the gap between the rich and the poor, study claims (Independent) (Article full text). The data presented shows a much clearer correlation between being able to afford to live and good mental health than it does any impact of green space.

Illegal Parking on the Common

The meeting was told the council think they now have enough accumulated evidence of illegal parking to “get the legal team on to actually prosecuting”.

The meeting was told the cows will be back on the common next week. Making the area opposite the marina, by the new development, available for use by the cows again was mentioned. If this can be done the cows won’t have to be moved off the common completely for many shorter, smaller, events.

The meeting was told the Friends will “make sure they get taken off as little as possible”.

The term used by the chair at the meeting was “cows”; but this provoked controversy when I used it on Twitter in my live reports from the meeting as the beasts are in fact to be stears or bullocks. Others have suggested “cows” is a reasonable term for any bovine animal.

I asked if the city council’s Midsummer Common management group meetings had been taking place and if there could be more transparency for example by publishing the meeting papers.
I was told the management plan for the common called for such meetings (between councillors, council officers, and other interested groups such as the Friends) to take place regularly but they had not been held for some time. The Chair of the Friends of Midsummer Common Susan Stobbs said she would support them operating transparently.

Mr Baxter warned that the Synagogue on Auckland Road were threatening to gate the access to the common through their site; contrary to their planning permission and blocking a right of way. He urged people to join him in campaigning against this.

I have attended previous AGMs of the Friends of Midsummer Common and have written the following articles:

I tweeted from the 2013 AGM. I don’t think I was aware of the 2014 event (I’d spent the day at the County Council meeting) but there are official minutes.