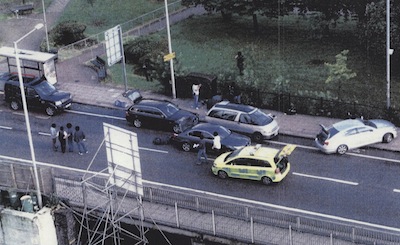 Photo of the scene of the shooting of Mark Duggan as submitted as evidence to the inquest.

Inquests ought be open, public, processes for learning about how and why someone died so we can try and prevent something similar happening again.

One thing which has struck me from the currently ongoing inquest into the death of Mark Duggan, who was shot by the police in London on the 4th of August 2011, is gaps in the information being provided by the police witnesses.

A key issue for the inquest is what the police knew, and when, so the question of if things could have been done differently can be considered.

The police are however claiming that much of the information they acted on cannot be provided to the inquest. Police witnesses say they were prevented by law from writing some of the information down, which means now, years on, it’s hard to reconstruct who knew what, when.

I am intrigued and astonished by this and would like to know which law it is that the police think prevents them from writing things down.

As well as material which the police say the law prevented them writing down at all there is other information which there is a written record of, but which isn’t being provided to the inquest. The information in this latter class is redacted from documents and replaced with a “gisted” version providing the gist of what has been removed.

I don’t know what the information which the police knew, but couldn’t write down, and are not talking about is. I can only offer up some guesses:

I suspect the police, and the then Serious Organised Crime Agency (whose role has been taken on by the new National Crime Agency), are protecting their methods and capabilities so that criminals are not aware of how law enforcement agencies are able to gather information on what they are up to. I think that, to a degree is desirable, but we need to know enough about what is being done so that in this case we can review what happened, and in other cases, so we can ensure there is appropriate oversight, regulation, and public support for what is being done.

The unknown unknowns make it very hard for the inquest to do its job. How can recommendations for making the relevant police and law enforcement agency practices safer be made if details of those practices are not being shared?

What if the key problem was getting tracking information showing the location of key individuals (or their phones or vehicles) to the police officers on the ground?

Detective Superintendent Fiona Mallon appeared before the inquest on the 25th of September 2013:

Q : One of the difficulties is this, is it: that you were not allowed to write down the intelligence?

Q. So you are working from your memory now?

The following day questioning of Detective Superintendent Mallon continued, the following is from the 26th of September 2013 transcript

Just on that, you mentioned yesterday that there are sensitivities in being able to write down intelligence. By operation of law you are not allowed, in certain circumstances, to make reference to intelligence that you receive.

Q. On this occasion, did you nevertheless make a note but we are not allowed to see it?

Tactical Firearms Commander, Detective Inspector, anonymised for the purpose of the inquest as “Z51′ was interviewed by the counsel to the inquest, his questioning is contained in the October 2nd 2013 transcript:

Q. Can I just ask you about the way logs deal with intelligence? We’ve seen various versions of documents called day books, note books, whatever you like, in which people have, if I may say so, a very coy reference to intelligence, because they are not supposed to write that intelligence down in available documents; is that fair?

Q. Was there any provision in August 2011 for you to have sensitive books so that if you had to write intelligence down somewhere you could do it and keep it locked away?

A. The type of intelligence that we were dealing with we were not allowed to record it.

Q. Was that a Metropolitan Police standard operating policy that you were not allowed to record it?

A. I think it’s legislation.

The 23rd of September 2013 transcript contains the following exchange:

Q. Are you allowed to write intelligence in this sort of log?

Q. Do you write sensitive intelligence down anywhere else?

A. No. Because we are restricted by legislation from doing so.

Q. Just so the jury can get some idea of the surrounding circumstances of the sensitivity here, how securely was this log kept?

A. This log was kept in my office at — in a secure building where I worked.

Q. Under lock and key?

A. Yes, under lock and key.

Q. So unless you were prevented by law from writing something in there, you could trust the confidential nature of what you wrote down, could you?

Source of the Information

On p4 of the 30th of September transcript Detective Sergent ZZ17 was asked:

Now, between 31 July 2011 and 4 August, was all the intelligence being fed to you for this four-day operation fed from SOCA or was there any other outside agency?

All of the particular intelligence was from SOCA,

This suggests the material was not from the intelligence services, but I suppose it could be information obtained by GCHQ then provided to the police via SOCA.

The Serious Organised Crime Agency website, which is no longer available as the agency has been replaced by the National Crime Agency, used to state:

The gathering, sharing and storing of this information and intelligence by us is governed by legislation, the criminal justice system and strict internal safeguards to ensure all information is secure.

A SOCA lawyer is present in the inquest ready to interject if questioning approaches information which SOCA doesn’t think ought to be released.

Another, quite separate, issue with the police evidence is they all quite blatantly appear to be following an agreed line. The counsel for the inquest has explicitly highlighted an example of this, asking on the 9th of October:

Q. Have you all met to decide that, as a matter of response in this Inquest, you are all going to say that Ferry Lane is the best possible place you have ever known for a stop?

this question came after a number of police witnesses had said the same thing, in very similar words.